We That Are Young Reader’s Guide 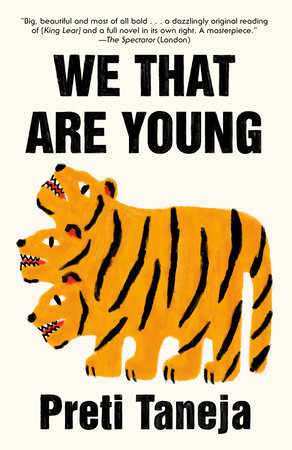 We That Are Young Reader’s Guide

print
We That Are Young Reader’s Guide

The introduction, author biography, discussion questions, and suggested reading that follow are designed to enhance your group’s discussion of We That Are Young, an explosive and timely adaptation of William Shakespeare’s King Lear by Preti Taneja.

1. How does Indian business magnate Devraj Bapuji decide how to divide up the Company upon his retirement? What is controversial about his decision? What does he ask his daughters to speak to him about in preparation for this and how does each respond? How does Devraj react to what they have to say and what events does this set into motion? Were you surprised by Sita’s response to her father’s demands? Why or why not?

2. Discuss the treatment of women in the novel. What roles and characteristics are the females in the novel expected to assume? How do they respond to these societal, cultural, and filial demands? How does each of the three sisters resist expectations and what are the consequences of this? What does the book ultimately seem to suggest about what becomes of “wilful” women in a society such as the one depicted in the novel?

3. Consider the recurring motif of false appearances. Who or what is not as they appear to be? Where do we find instances of hypocrisy in the novel? Are the characters able to discern between what is true and what is not and see through false appearances? If not, what prevents them from doing so? How, for instance, do the people of the basti respond to Jeet as Rudra or Devraj as an anti-corruption protest leader? How do the parts of the story told by Devraj force readers to confront this same dilemma?

5. What does the novel have to say about agency and self-determination versus pre-determination and fate or dharma? How much control do the characters have over their own lives and futures? Are any of the characters able to exercise agency over their own lives and, if so, what is the result? What is dharma and which of the characters believe in it? How does this belief affect their choices? Does the book ultimately seem to support or challenge the concept of dharma? Explain.

6. How does the novel explore the issue of nationalism? What examples of nationalism are found in the novel? Why does Devraj try to contain his successful company by remaining in India only? How do characters in the book seem to feel about globalization and the integration of East and West? How does nationalism ultimately affect those living in India?

7. Explore the treatment of nature in the book. Consider, for example, the imagery of the natural world, the depiction of the storm, and the slaying of the birds that inhabit the Farm. What does the book reveal about the ways in which we confront and are confronted by nature, both the forces of the natural world and our own human nature? Does the book suggest, for instance, that nature is something we can work in harmony with or, instead, that it is something we should be frightened by? What impact do the characters in the book have on the natural world they inhabit? Is their influence primarily positive or negative? Explain.

8. Evaluate the structure of the book considering narration and point of view. Why do you think that the author made the choice to divide the book up into assigned sections for each of the younger generation alternating with Devraj’s first-person narration of his own story? How do you think that your interpretation or reaction to the story would be different if the author had chosen to commit to one narrator or a single point of view? Was there one character whose voice and story resonated with you the most? If so, why?

9. Discuss the theme of justice. Do the characters in the novel inhabit a just world? If so, how is justice determined and how is it carried out? Do any of the main characters seem to have faith in a system of justice? How can you tell? How are their actions influenced by this belief?

10. Consider also the theme of power. How is power defined within the novel? Who holds the most power and why? What does Jivan’s mantra at the start of the story tell us about this subject? Who in the story loses power and what causes them to lose it? Does the book suggest whether power can be regained once lost or can be acquired by those who never possessed it?

11. Taneja’s novel is overflowing with lush descriptions of food—both rancid and fresh. How might the author be employing food as symbol and metaphor? What can we learn, for instance, about society and class from the descriptions of food and its consumption? What do we learn about the main characters via descriptions of their eating habits and preferences? What other information do readers gain from the detailed exploration of food, hunger, and satiation?

12. Explore the various forms of corruption presented in the novel. Does the novel suggest what lies at the root of corruption? How does the setting of the novel—both time and place—contribute to this dialogue? Are there indications that any of this corruption could be prevented or remedied? If so, how?

13. The novel offers a portrait of a fierce clash between an older generation and a youthful one, between so-called tradition and modernity. Does one ultimately seem to win out over the other? Explain.

14. What becomes of the Devraj family and the Company at the conclusion of the novel? Who is left at the helm of the business? Were you surprised by this? What are the leader’s or leaders’ first priorities and what do they hope to accomplish in the future?

15. Evaluate the novel in relationship to the story it is an adaptation or modern translation of: William Shakespeare’s famous tragedy King Lear. How faithful was the author to Shakespeare’s version? What themes do the two versions share? Where, if anywhere, does Taneja’s version diverge from Shakespeare’s? Why do you think that King Lear lent itself to this kind of modern adaptation and the setting that Taneja chose? Would you say that the issues treated in King Lear and We That Are Young are timely or universal ones?

16. Many critics of Shakespeare’s play believed that King Lear was the major victim of the tragedy. Does Taneja’s adaptation have a victim or victims? If so, who? Why do you consider them as such? Can Devraj Bapuji be considered a victim within Taneja’s novel or is he a victimizer responsible for the tragedy that befalls his family? Discuss.

17. How would you describe the book within a conversation on genre? Is We That Are Young a work of realism, for instance? Why or why not? Consider setting, symbolism, and form. Why might the author have chosen to work within this particular framework despite the original form and genre utilized by Shakespeare?

Learn More About We That Are Young
print

This Is My Life
Meg Wolitzer
Back to Top