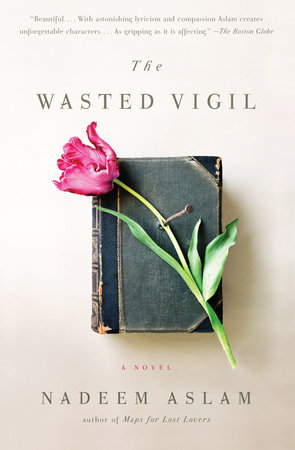 The introduction, questions, and suggestions for further reading that follow are designed to enliven your group’s discussion of Nadeem Aslam’s novel, The Wasted Vigil.

The Wasted Vigil takes readers into the very heart of Afghanistan, revealing the impact of the large historical and religious forces—the decades of war, exploitation, and fundamentalist repression—on the lives of five remarkable characters. Marcus, an English doctor who has lived in Afghanistan for many years, married an Afghan woman, Qatrina, and converted to Islam; David, a former cold war spy for the US, who has returned to Afghanistan to try to discover the fate of the boy he thinks of as his son; Lara, a Russian woman who is searching for her brother, Benedikt, a soldier who went AWOL during the Soviet invasion; Casa, a bitterly angry young jihadi eager to give his life for Islam; and James, an American special forces agent willing to go to any lengths to protect America from Islamic terrorists.

Through the intersecting lives of these characters, Aslam opens multiple perspectives on the ruined world of Afghanistan and constructs a story of remarkable depth and complexity. The novel shows how the undercurrents of personal and political history surge into the present and threaten to engulf the characters and the world around them. Indeed, the narrative progresses not so much in a linear arc as by a layering of past and present, a steady accretion and deepening of each character’s personal history that reveals the many ways their individual fates are tied up with the fate of Afghanistan. Marcus’s story, for example, is revealed incrementally; readers are told that he is missing a hand, but how that hand was lost is not made clear until much later in the novel, as more and more of his past is presented. Casa, too, is shaped by the violence of his past, having lost his parents and grown up in refugee camps where he was scarred by Soviet bombings. The cruelty and loss of dignity he has suffered have made him ripe for recruiting by Islamic jihadis. Likewise, David’s past as a spy, his relationship to Marcus’s daughter, Zameen, and to James’ father, Christopher, is gradually revealed as David comes more clearly into focus. The novel as a whole shows how past is prologue, how the ramifications of Soviet and American meddling in Afghanistan, and the repression of the Taliban, are still being profoundly felt in the lives of Lara, Marcus, David, James, and Casa. Each character becomes increasingly complex as the story takes shape, and any worldview that sees clear-cut distinctions between good and evil is shown to be hopelessly simplistic in Aslam’s nuanced rendering.

The Wasted Vigil offers a portrait of Afghanistan that is at once intimate and panoramic, capturing the sweep of history and the turbulence of the human heart. It is a work of fiction that reveals the emotional truth of life in this war-ravaged country more starkly and viscerally than any journalistic or historical account could have done.

1. Nadeem Aslam has been widely praised for his richly poetic prose style. What passages in the book seem especially beautifully written? What makes these passages so powerful?

2. Early in the novel, readers learn that Marcus has lost his hand. Why does Aslam withhold the story of precisely how he lost that hand until much later in the book?

3. When David confronts James about torturing Casa, telling him that it’s illegal, James replies: “Illegal? This is war, David. You’ve been looking into the wrong law books. These are battlefield decisions” [p. 305]. How else does James justify torture? Why is David so fiercely opposed to it? How do their arguments relate to the current controversy about the United States’ use of torture in the “war on terror”?

4. James says of Casa and fundamentalists like him: “They are children of the devil. They have no choice but to spread destruction in the world.” David counters: “He is the child of a human, which means he has a choice and he can change” [p. 306]. Discuss these differing points of view.

5. How does The Wasted Vigil deepen our understanding of both the Soviet and American conflicts in Afghanistan? What does the novel suggest about the motives and methods of American and Soviet involvement in the region?

6. How is the Taliban depicted in the novel? Why are they so violently repressive of women and so fiercely opposed to education?

7. What aspects of his personal and family history draw Casa to become a jihadi? How does Aslam manage to make him a sympathetic a character?

8. What does The Wasted Vigil say about how war damages human relationships—between parents and children, wives and husbands, lovers and friends?

10. Why is the overturned giant stone head of the Buddha that rests in what was once Marcus’s perfume factory given such a prominent place in the novel? What is the symbolic value of this statute?

11. The narrator writes: “This is among the few things that can be said about love with any confidence. It is small enough to be contained within the heart but, pulled thin, it would drape the entire world” [p. 307]. In what ways is The Wasted Vigil as much about love as it is about violence, hatred, and war?

12. What is it that brings Lara, David, Marcus, Casa, and James to Marcus’s house? In what ways is the house itself symbolic?

13. What are some of the most tense and shocking moments in the book? Why does Aslam include such graphic depictions of violence in the novel? What effects do these depictions have on the reader?

14. Near the end of the novel, Marcus reflects: “Both sides in Homer’s war, when they arrive to collect their dead from the battlefield, weep freely in complete sight of each other. Sick at heart. This is what Marcus wants, the tears of one side fully visible to the other” [p. 314]. Why does Marcus want this? What good might come of each side witnessing the grief of the other?

Nadeem Aslam is the author of two previous novels, both of which were longlisted for the Man Booker Prize: Maps for Lost Lovers, winner of the Kiriyama Prize and a New York Times Notable Book, and Season of the Rainbirds. He is also the recipient of a Lannan Literary Fellowship. Born in Pakistan, he now lives in England.

Feryal Ali Gauhar, No Space for Further Burials; Karmi Ghada, In Search of Fatima: A Palestinian Story; Philip Hensher, The Mulberry Empire; Yasmina Khadra, The Swallows of Kabul; Khaled Hosseini, A Thousand Splendid Suns; Francesca Marciano, The End of Manners; James Meek, We Are Now Beginning Our Descent; Rory Stewart, The Places in Between.
Learn More About The Wasted Vigil
print

The End of Manners
Back to Top