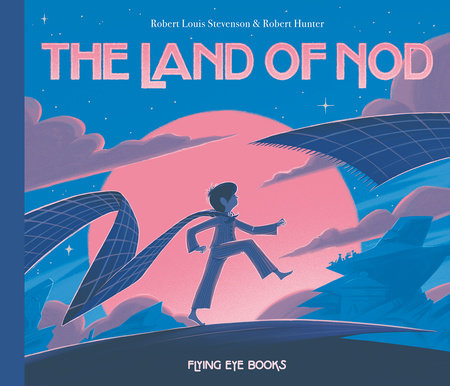 About The Land of Nod

Ever wondered about the mysterious place we all visit when we fall asleep? Robert Louis Stevenson’s classic children’s poem about dreamland is given new life in this wonderfully illustrated book. Accompanied by Robert Hunter’s bold and beautiful illustrations, this picture book will bring the beloved Scottish author’s work to a whole new generation of young readers.

Robert Louis Stevenson’s short meditation on the nature of dreamland, from his 1885 collection “A Child’s Garden of Verses,” returns in a striking stand-alone picture book: The Land of Nod. Here the lines of Stevenson’s poem are set amid dramatic, color-saturated illustrations by Robert Frank Hunter.
—Wall Street Journal

In his first book for children, British illustrator Hunter brings substantial depth and poignancy to Stevenson’s 1885 poem. […] Hunter uses lurid shades of pink and blue to striking, cinematic effect […] It’s a sympathetic portrait of a child making the best of his convalescence, and an enticing vision of the wonders that await in dreams.
—Publisher’s Weekly, STARRED REVIEW

The illustrations are modern-looking, with stylized shapes and striking color combinations, but somehow also timeless. […] It’s a wildly imaginative take on the story, and it elevates the original poem and gives it additional context. […] It’s a visually stunning book, with a simple yet lovely storyline to go along with it.
—Portland Book Review

A warm reminder that adventures await, no further away than the nearest pillow.
—Kirkus Reviews

[Rob Hunter] hand-draws all the visuals using pencils and crayons, before adding colour digitally. This process gives his illustrations the depth, atmosphere and otherworldly quality that make for a beautiful sequence of images. Also the colours, which transform from a bright daytime scheme into a blue and pink-tinged nighttime one, really plunge the reader into the magic of the book.
—It’s Nice That

A classic children’s poem by Robert Louis Stevenson is given new life in this picture book adaptation, illustrated by London-based illustrator Robert Frank Hunter. […] Hunter’s palette is especially striking, a feast for the eyes that alternates between cool blues and warm moments of pink.
—Julie Danielson, Seven Impossible Things Before Breakfast

Deliberate, ethereal and playful, Robert Louis Stevenson’s classic poem of childhood is given new meaning in the details of the illustrations.
—The Wandering Bookseller

Mr. Hunter’s illustrations of this classic tale by Robert Louis Stevenson is lovely. As the poem moves along, the graphics take you on the journey this young one takes in his mind…
—Book Faerie