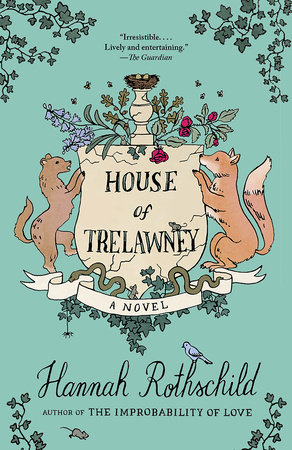 The questions, discussion topics, and other material that follow are intended to enhance your group’s conversation of Hannah Rothschild’s The House of Trelawney, a heartwarming satire of an ancient British family facing imminent collapse in the wake of the 2008 global recession and the revelation of long-kept secrets and scandals—and how the house that threatens to ruin them all ultimately brings them together in the most unexpected ways.

1. The book begins in summer 2008 and ends in summer 2010. How does this span of time reflect the parallels between the Trelawneys’ familial crises and those of the world at large? How much of their personal struggles are linked to the global financial upheaval?

2. Discuss the roles of the novel’s female characters in the domestic sphere and the business/professional world. Among the various depictions of women who stick with tradition—Clarissa, Jane, Glenda—and those who take more “eclectic” life paths—Tuffy, Arabella, Blaze, Ayesha—which characters seem most satisfied by their choices in life? Why?

3. By contrast, how does the novel depict the value of the family’s patriarchy through the male characters? Compare the fates of Enyon, Tony, Kitto, Toby, Ambrose, Mark, and Joshua. Is there a difference among generations, or are their individual circumstances more due to their personalities, and the context in which they are raised?

4. What are the consequences of the mismatch in Kitto and Blaze’s abilities and interests versus their inherited roles ultimately have on the family’s fortune, future, and reputation? How does the next generation contest these rules of primogeniture? Do you believe everyone landed in their right place by the end of the novel?

5. Blaze’s biggest insecurity is the scar on her face, which she diligently covers with makeup and “polish[es] her cleverness like a shield until it shone so brightly that others had to protect their minds from its piercing rays” (79). What events in her life change the appearance of her scar, to herself and to others? Can you relate to her experience or know someone who can?

6. The House of Trelawney is as much a character in the book as the humans who live and around it, and it’s said that “the combination of the manicured and the wild, the conflagration of man’s determined hand and nature’s attributes, created an unforgettable experience” (5). How do the events in the novel, including the transformation of the house itself, reflect this conflict of man versus nature? Who wins in the end?

7. Jane, Blaze, and Anastasia shared a deep friendship in their youth, which we learn about in pieces over the course of the novel. How did the gradual reveal of the truth of their break-up affect your reading experience? Were you surprised by the truth of Anastasia’s true love, and the harm it caused to Jane and Blaze? Did you think their ongoing conflict was more with each other, or more the response from Anastasia’s betrayal?

8. The oracle Alvira tells Blaze that “it’s better to be needed than wanted. Desire and romantic love pass, leaving little trace. But dependency has an afterglow, the satisfaction of having done something good” (33). How does this prophecy play out in her relationships with Jane, Joshua, and Perrin? Do you think she’d agree with this statement by the end of the novel?

9. What hardships do the family members living at Trelawney undergo when their investments disappear? How do they compare to those Clarissa freely cites, of her childhood during wartimes, and other large-scale catastrophes? How do the different generations respond to the crash? Relate this to your experience of the 2008 recession and other periods of social unrest and instability from your lifetime.

10. A few of the characters—Kitto and Jane, Mark and Ayesha, Toby and Celia—attempt to cross the class divide for the sake of love. Are they successful? What does this suggest about the prominence of generations-old rules about social hierarchy? Is there a new “nobility” emerging in the contemporary generation of the family?

11. What changes in the family dynamics after the car crash and Enyon’s death?

12. Blaze’s idea to capitalize on the disrepair of the house as “a testament to an anachronistic and antiquated system [and] degradation of a noble dream” is received with much challenge from the family, health and safety officials, and the public (182). Do you think anyone in the novel was able to learn this lesson fully? In your experience, are people in general able to confront these realities—about the ends of previous ways of life—with ease?

13. Discuss Ayesha’s motives and burdens in the novel. Although she is late to join the family, how intertwined is she in its politics and disputes? By the end of the book, how invested is she in the family’s success?

14. How would you characterize Ayesha and Blaze’s relationship? What common viewpoints and experiences do they share, and how do their opportunities for personal happiness differ?

15. What are the repercussions of Ambrose’s decision to sell the house to Sleet on the family? Do you think that they ultimately benefitted from the move?

16. What exposure do you have to stories about the royal family in Britain or other contemporary aristocratic families? How does their reality (or what we know of it) compare to the fairy-tale version of what it’s like to be royal?