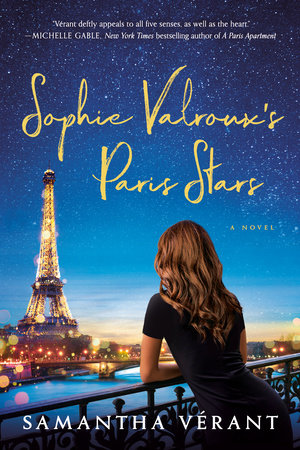 
1. In the beginning of the novel, we learn that Sophie still wants to go after the one and only dream she had before arriving to Champvert—achieving Michelin stars—and she thinks Rémi might stand in her way because he doesn’t seem all that supportive. Have you ever given up on a dream? Have you ever had somebody not show support?

2. Sophie still feels as though everything has just been handed to her, that she truly didn’t work for this new life at the château. Do you think her pride stands in her way? Or is it fear? How would you feel if you inherited a château and all of the responsibilities that come with running an estate of this magnitude?

4. Sophie’s grief wavers from the recent loss of her grand-mère. When she sees items or smells scents that remind her of Odette, she loses focus and wishes she still had her grand-mère’s guidance. Thankfully, she has the friendships of Phillipa and Jane. When you’re going through a tough time, are your friends there for you? What is a real, tried-and-true friendship?

5. Rémi wants to get married to Sophie sooner rather than later and puts pressure on her to do just that. Do you think his reasons about loss are justified? Do you think that Sophie needs more time to adjust to everything, including becoming a mother to Rémi’s daughter, Lola?

6. When Rémi finds out that Nicolas de la Barguelonne asked Sophie to cook at the Sous les étoiles event in Paris and Sophie agrees, Rémi loses his cool. He feels she might be taken from him by high society because she was born of noble blood and he’s just the farm boy from next door. What did you think of his statement and Sophie’s reaction?

7. After Sophie falls and loses her senses of smell and taste—the worst thing that could happen to a chef—she doesn’t tell anybody. She doesn’t want to believe it’s happened, and she cooks blindly in the kitchen for a few months, giving Phillipa more responsibilities. Has something similar happened to you to impede your work or aspirations? Do you think Sophie’s pride and stubbornness get in her way?

8. There is a large cast of characters at the château, all of whom become family to Sophie. Which character do you gravitate toward the most?

9. At the event, Sophie feels set up for failure. She still can’t smell or taste. Her cooking idol seems to hate her on sight. The threat of sabotage in the kitchen runs rampant. Would you have cracked under the pressure or run away?

10. What do you think of Rémi’s reaction to the photo of Sophie and Nicolas kissing? If the scenarios were reversed and it was Sophie who saw Rémi kissing another woman in a photo, how do you think she’d react? What would you do?

11. As Sophie hides her condition, her kitchen is out of sorts, and she finally breaks down and confides in Phillipa, who takes the brunt of the blame. Have any of your friends gone to bat for you even though the problem was you?

12. When Rémi and Sophie finally make up, everything in Sophie’s world changes and her senses return. Do you think stress, pressure, sadness, and grief contributed to her condition? How would you have handled everything Sophie struggled with on this journey?
Learn More About Sophie Valroux’s Paris Stars
print

The Way We Weren’t
Phoebe Fox

Sadie on a Plate
Amanda Elliot

With Love from London
Sarah Jio

The Royals Next Door
Karina Halle

Can You See the Wind?
Beverly Gologorsky

A Rather Lovely Inheritance
C.A. Belmond

The Edge of Winter
Luanne Rice

The Rules of Arrangement
Anisha Bhatia

The Shoemaker’s Wife
Adriana Trigiani
Back to Top