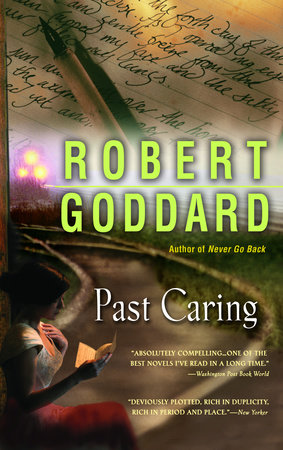 An instant bestseller and Booker Prize nominee, Past Caring blends the elements of an intense thriller with an intriguing historical investigation.

Edwin Strafford had a bright future ahead of him. He was a distinguished Edwardian Cabinet minister at the height of his parliamentary career, and he was about to marry the love of his life. But on one tragic day, both worlds came crashing down without explanation. Strafford lived out the rest of his life, a forgotten recluse who never fully knew the truth about his own downfall. Years later, Martin Radford is hired to investigate the case and close the book on Strafford’s mysterious life. Little does Radford know that the story is much more personal–and more dangerous–than he ever could have imagined.

The questions, discussion topics, and author biography that follow are intended to enhance your reading of Robert Goddard’s Past Caring. We hope they will enrich your experience of this riveting novel.

1. What was your initial understanding of the title? What other interpretations did you discover for the words “Past Caring” as you read the book?

2. While navigating the rocky terrain of Madeira in the early scenes, Martin Radford’s friend Alec Fowler warns him, “Don’t look down. Walk straight ahead and you’ll be perfectly safe.” What predictions were realized in this statement during Martin’s investigation?

3. How was your reading influenced by the concurrent storylines of Edwin Strafford’s memoir and Martin’s investigation? What similarities and differences did you detect between the various parallel characters, including Edwin and Martin, Gerald "Couch" Couchman and Alec Fowler, and Elizabeth Latimer and Eve Randall?

4. How did Couch’s actions during the defeat of Colenso at South Africa foreshadow his future behavior?

5. What was your first reaction to the revelation that Martin had a connection with Edwin through their separate relationships with the Couchman family? What did you think the significance would be?

6. Discuss how you felt when Elizabeth rejected Edwin without explanation. Were you angry with her for not hearing him out? Did you empathize with her feelings of betrayal?

7. Why do you think Edwin at first made little attempt to investigate the mysterious circumstances surrounding his downfall? Do you believe there was a point when he finally "declared war" on finding out the truth?

8. What did you learn about 19th-century English politics and the Suffragette movement? Discuss the role Winston Churchill played in the novel. Do you believe Churchill’s character knew more about the plot against him than he let on?

9. When Eve revealed the certificate "proving" Edwin’s previous marriage, did you believe it to be true? Did your opinion of Edwin change at that moment? When Martin’s forbidden affair with a student was revealed, he seemed to not take responsibility for his fault in the matter. Did that prompt you to have second thoughts about Edwin’s own innocence?

10. What determined whether Elizabeth could be forgiving?

11. Were you surprised to find out Leo Sellick’s true connection to Edwin Strafford? What clues did Goddard give to hint that Leo wasn’t exactly who he first said he was? There are several other surprise connections unveiled between seemingly unrelated characters as the novel unfolds. Which surprised you the most? Which did you suspect and why?

12. Had the book been set in the present time as opposed to 1977, how would have Martin’s investigation been helped (or perhaps even hindered) by modern technology?

13. What role did Quinta do Porto Novo play in the lives of those who took up residency there throughout the novel (Edwin, Leo, Elizabeth and, finally, Martin)?

14. What did you predict for Eve and Martin’s future? Though Eve tells Martin where to find her in the next few months if he wants to try to "take a chance," do you think Martin will pursue her?

Learn More About Past Caring
print

Sister Pelagia and the Black Monk

Sister Pelagia and the Red Cockerel
Back to Top