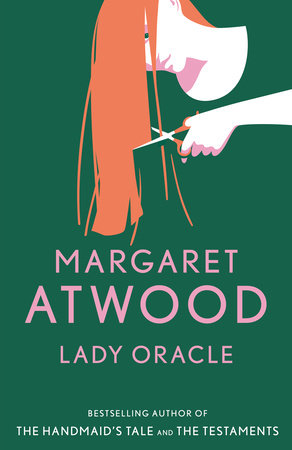 Lady Oracle is Margaret Atwood’s third novel, a comic masterpiece in its parodies of literary forms and subversion of literary expectations.

Our heroine is Joan Foster, who has spent her life on the run, albeit quietly. Her adolescent obesity and the constant criticisms of her disapproving mother inspire her to flee to England. A continent away, Joan begins to find her own voice through her pseudonymous career as a romance novelist, an undertaking that she hides from Arthur, her manic-depressive, revolution-hungry husband. When Joan’s writing finds its ultimate expression in a collection of feminist poetry that becomes the sleeper hit of the country, she is overwhelmed by the sudden rush of publicity and notoriety.

Unable to juggle her crumbling marriage, her madcap affair with an unpredictable performance artist, and her feud with an insidious celebrity blackmailer, Joan feigns her own death and flees to Italy, determined to start again incognito. But Joan, who has spent her whole life hiding, soon finds that the invisibility that once plagued her is now impossible to regain.

1. The specters of the circus Fat Lady and Joan’s perfectly coifed mother are the twin specters that haunt Joan throughout the novel. How does each of these visions alter with each subsequent encounter? What does each represent for Joan?

2. Examine the parallels between Joan’s life and the adventures of her Gothic heroines. How does Atwood use excerpts from the novel to illuminate turning points in Joan’s own story?

3. Atwood devotes the first half of the novel to detailing Joan’s childhood. How do her experiences surviving her mother, her obesity, and the torments she suffers at the hands of her peers affect her adult life? Her development as a writer?

4. Although Joan has long made a consistent living as a novelist and becomes a runaway success as a poet, she is still ashamed enough of her novels to keep them a secret from Arthur and is quick to side with the detractors who disdain her poetry. Why is Joan unable to accept and embrace her achievements?

5. "Nice men did things for you; bad men did things to you," is Joan’s mother’s motto. Compare the various men that dot Joan’s life; do you find any truth in this syllogism?

6. In addition to Joan’s own host of identities, this novel is laden with other secret dualities: Joan’s daffodil manrescuer, her murderer-resurrectionist father, the Royal PorcupineChuck Brewer, and Leda SprottE.P. Revele. What is Atwood’s purpose for creating this mosaic of multiplicity? Can truth exist when there are so many versions of each story?

7. "I discovered there was something missing in me. This lack came from having been fat; it was like being without a sense of pain, and pain and fear are protective, up to a point. I’d never developed the usual female fears," notes Joan soon after she’s shed the hundred pounds. Obesity confers on Joan a certain invisibility. Discuss the implications of this phenomenon in her adolescence and later life.

8. Throughout her childhood, Joan views Aunt Lou as the only adult who offers her unconditional love, but it is Aunt Lou who makes her the most conditional offer of her life: she will inherit the money only if she loses the weight. What does this offer reveal about Aunt Lou and her relationship with Joan? Joan’s childhood perceptions of Lou?

9. "I decided that passionate revelation scenes were better avoided and that hidden depths should remain hidden; facades were at least as truthful," Joan reports. Today, confessional memoirs are all the rage: the more outre, damaging, and abusive one’s past, the better. From high-brow literature to talk-show television, the urge to tell-all is pervasive. What compels Joan to not only hide but fabricate her entire past ? Is her shame and compulsive secrecy personally or sociologically motivated?

10. "I’d given up expecting [Arthur] to be a cloaked, sinuous, and faintly menacing stranger . . . Strangers didn’t leave their socks on the floor . . . I kept Arthur in our apartment and the strangers in their castles and mansions, where they belonged," claims Joan. How successful is she at separating her desires from her expectations? At compartmentalizing her romantic and domestic needs? What catalyzes her affair with the Royal Porcupine? Causes the breakdown of her and Arthur’s marriage?

11. Although Joan claims to be seeking an entirely new, incognito life, she very nearly gives herself away by returning to a place where she is readily recognized. Does she run with the primary hope of being caught, like one of her Gothic heroines? Throughout the novel, Joan’s frequent solution to her problems is flight. What happens in the few instances when she chooses to fight?

12. How does your view of the Resurgenites influence your view of Arthur? How effective is he as a husband, a political rebel, a companion and lover for Joan?

13. "The future," Joan claims, "doesn’t appeal to me as much as the past, but I’m sure it’s better for you." Ultimately, Joan resolves to disclose the secrets of her past in order to protect her friends. Do you believe this disclosure will enable her to begin living in the present? If so, what might her next step be?

Margaret Atwood was born in 1939 in Ottawa and grew up in northern Ontario, Quebec, and Toronto. She received her undergraduate degree from Victoria College at the University of Toronto and her master’s degree from Radcliffe College. The daughter of a forest entomologist, Atwood spent a large part of her childhood in the Canadian wilderness. At the age of six she began to write "poems, morality plays, comic books, and an unfinished novel about an ant." At sixteen she found that writing was "suddenly the only thing I wanted to do." Throughout her career, Margaret Atwood has received numerous awards and several honorary degrees including the Canadian Governor General’s Award, Le Chevalier dans l’Ordre des Arts et des Lettres in France, and the National Arts Club Medal of Honor for Literature. She is the author of more than thirty volumes of poetry, nonfiction, and fiction, including children’s books, and short stories. Her most recent works include The Handmaid’s Tale (1986), Cat’s Eye (1989), and Alias Grace (1996), the story collection Good Bones and Simple Murders (1994), and a volume of poetry, Morning in the Burned House (1995). Ms. Atwood’s work has been published in more than twenty-five countries. She has traveled extensively and has lived in Boston, Vancouver, Montreal, London, Provence, Berlin, and Edinburgh. Margaret Atwood now lives in Toronto with novelist Graeme Gibson and their daughter.
Learn More About Lady Oracle
print

The Dog of the North

The Feast of Love

Air & Fire
Back to Top