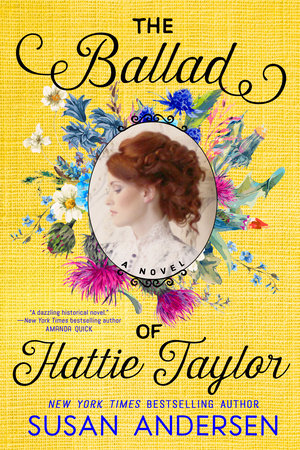 The Ballad of Hattie Taylor by Susan Andersen
Questions for Discussion

1.   In Hattie’s youth, most times inadvertently but sometimes intentionally, she broke many of the accepted conventions ruling women’s behavior. Can you think of a few examples? How would you describe the town’s reactions to Hattie? How would her behavior be received today?

2.   In the early 1900s, women’s sexuality was rarely discussed with young women, and they were often left unprepared for their first experience with intercourse. Jane-Ellen feared everything about sex and simply could not find enjoyment in the act. Why do you think the author chose to include a character with this perspective?

3.   Until Hattie left Mattawa to attend normal school, her only real friend was Moses Marks. Do you think it is possible to have an equally close friendship with the opposite sex as most of us enjoy with our own gender? Why or why not?

4.   In that same vein, Hattie was eighteen years old before she made her first female friend. In what ways do her friendships with Nell and Moses differ? In what ways are they similar? Is one friendship stronger or deeper than the other? Be specific.

5.   Why do you think Hattie chooses to accept the teaching position, knowing it means she will have to return to Mattawa? Do you see changes in Hattie when she returns home? In what ways does her occupation provide a sense of fulfillment?

6.   Why do you think the author chose to include a sexual assault? How do you feel each character handles learning about the assault? What role do you think Hattie’s female friends and relatives play in her healing process?

7.   Why do you think Hattie initially refuses to tell Jake about the assault? Do you agree or empathize with her decision? Why or why not?

8.   How does the novel explore the concept of justice? Do you feel satisfied with Roger’s fate? How does this relate to current conversations surrounding the #MeToo movement and gender politics?

9.   Which of Hattie’s age-specific characteristics, first as a child, then as a young adult, then as a woman, could you most identify with, and why? Did you experience any of Hattie’s struggle to fit in with a peer group and the wider community of adults? If so, how do you feel that impacted you as an adult, and did it have long-term effects?

10. A little over a hundred years ago, women were not allowed to vote, let alone sit on a jury panel. Women’s right to vote was ratified, nationwide, on August 18, 1920, but even then it excluded nonwhite women. The West Coast ratified women’s right to vote almost a decade earlier. Washington State’s women got the vote in 1910, California’s in 1911, and Oregon’s in 1912. Do you know when your female ancestors first voted, or what your current state allowed in the early 1900s?
Learn More About The Ballad of Hattie Taylor
print

Stages of the Heart

A Touch of Flame

Taken by the Prince

True to the Law

A Touch of Forever

How to Catch a Wicked Viscount

The Endearment
Back to Top