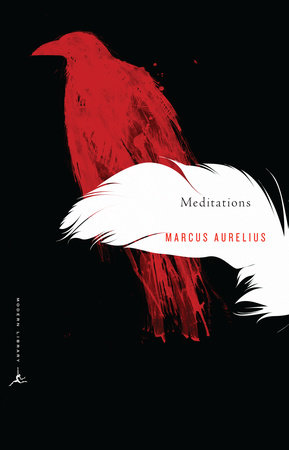 1. The Meditations refers often to the need to act "unselfishly," yet much of its advice seems to center on seeking tranquillity within oneself and ignoring the outside world. Is this a contradiction? Do other people really matter to Marcus, or is his philosophical outlook fundamentally selfish?

2. What qualities does Marcus praise his relatives and teachers for in Book 1? Are they the same qualities he seeks to acquire in the remainder of the work?

3. Marcus ruled at a time when Christianity was beginning to become more prominent in the Roman world. What elements of Christianity would he have found sympathetic? What elements would have been incompatible with his outlook? Do aspects of Marcus’s Stoicism find echoes in other religious traditions, for example in Buddhism?

4. Marcus several times uses the image of life as a play (e.g. 3.8, 11.1, 12.36). What specific similarities does he see? Is the image helpful in encapsulating his philosophy in other ways?

5. "We need to practice acceptance," Marcus says (7.3). "Without disdain." Do the entries in the Meditations show him doing that?

6. At several points Marcus expresses disapproval of the Epicureans for making pleasure their highest goal. Why does he find this attitude so objectionable?

7. The English poet and critic Matthew Arnold faulted the Meditations for a lack of joy. The translator’s introduction agrees, and suggests that Marcus’s pessimistic evaluation of human life is "impoverishing." Is this a fair criticism?

8. Marcus often describes the world as being in a process of constant change, yet he sees an underlying unity and direction in the way it works. Are these two conceptions compatible? Do modern theories about the nature of the universe make Marcus’s outlook more appealing than it might have seemed a century ago?

9. Does the Stoics’ emphasis on accepting all that happens to us as natural prevent them from trying to change the world in positive ways? Would a Stoic have participated in the civil rights movement, for example?

10. Marcus asserts (4.8) that only what harms our character can harm us. Is this true?

11. In urging himself not to fear death, Marcus makes use of several arguments found in other ancient thinkers: that others have faced extinction with courage, that death is a natural process, that non-existence did not harm us before our birth and can’t harm us after it, that death is unavoidable in any case. Are these arguments intellectually convincing? Do you find them emotionally persuasive?

12. What is the significance of the anecdote about the Spartans at 11.24?

13. Like many Romans, Marcus finds it helpful to use certain historical figures (e.g. Alexander the Great, Socrates, Nero) as touchstones of human virtue or vice. What historical figures serve a similar function for us? Is this practice useful or potentially misleading?

14. Would the Stoics’ respect for nature translate into an endorsement of modern-day environmentalism?

15. Marcus’s two sketches of his predecessor Antoninus Pius (1.16; 6.30) might be regarded as a kind of "mirror for princes," i.e. a portrait of the ideal ruler. Are the characteristics Marcus singles out the ones we look for in modern-day leaders? What other characteristics might he have added?

16. If you were to compile a catalogue of "debts and lessons" like the first book of the Meditations, who would appear in it?

17. Marcus advises himself at one point "to stop talking about what the good man is like and just be one" (10.16). Is it possible to be good without self-reflection? Are self-reflective people always the best?

From the Hardcover edition.
Learn More About Meditations
print

The Power of Myth
Bill Moyers and Joseph Campbell

Letters from a Stoic
Seneca

The Virtue of Selfishness
Ayn Rand

The Science of Mind
Ernest Holmes

On the Shortness of Life
Seneca

The Myth of Sisyphus
Albert Camus

For the New Intellectual
Ayn Rand

The Return of the Primitive
Ayn Rand