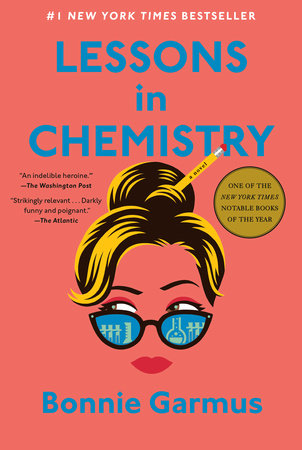 1. The late 1950s into the early 1960s was supposedly a halcyon time in American history. But was it? The war was over and men returned home to take back the jobs women had done in their absence. As a result, women were pushed into more subservient roles. What influences played a part in encouraging women to accept their place as only in the home?  And why, in today’s world, when women are in the workforce in record numbers, are they still doing most of the housework and child-raising?

2. Elizabeth Zott had no formal education, and yet she was able to self-educate, thanks to her library card. With the advent of technology, the library almost seems outdated, though many would argue that the library is more important than ever. Do you think libraries are important? If so, why?

3. Why does Elizabeth always wear a pencil in her hair? Is it a weapon or is it a symbol of strength?

4. Elizabeth refuses to accept limits placed on her by society and insists that others also ignore those limits. How do each of those characters ultimately rise to that challenge? And in what ways have you or others been limited by societal norms?

5. In the book, rowing is a metaphor on how Elizabeth sees a better society: that no one person in the boat is more important than the other. Have you ever participated in anything—work, sports, community efforts—where everyone must “row as one” in order to succeed? What are the hurdles people must overcome in order to reach the point where “it all feels easy”?

6. Six-Thirty is amazed by not only how often humans lie to each other, but how poorly they communicate overall. He struggles to understand the word “smart,” finding its very definition unintelligent. What does “smart” actually mean to you? Have you ever thought about what your pet might be trying to teach you?

7. The dictionary first defines faith as “the complete trust or confidence in someone or something” and “a belief in religious doctrine” second. Madeline draws this same distinction—that faith isn’t based on religion. Knowing this, what role does religion play in the book? What is a Humanist? What does the science of psychology tell us about the human’s desire to believe in something greater than themselves? And why do Elizabeth, Calvin, and Wakely all believe that personal responsibility—faith in one’s self—is more important?

8. The book includes male characters who are sympathetic to Elizabeth’s plight, and yet, with the exception of Calvin and Dr. Mason, have trouble standing up for women or other minorities in the workplace. Why do good-hearted people have trouble speaking up? And what are the consequences of not speaking up?

9. Elizabeth is sometimes depressed by the circumstances in her life. Not coincidentally, her show airs in the “Afternoon Depression Zone.” And yet she’s never a victim. How does she continually pick herself up? What fuels her resilience? And why, after she’s reached stardom, is she more miserable than ever?

10. Harriet Sloane is an inveterate magazine reader. How do magazines and media shape our culture? And what did Harriet mean when she first told Elizabeth to “recommit”? Is there some dream of yours that you wish you would recommit to?

11. Friendship and family are interconnected themes in the book. Can friendships sometimes provide family better than family itself? Walter isn’t Amanda’s biological father, but he loves her fully and is the most present person in her life. On the other hand, Avery Parker still loves the son she never knew. How do you define family?

12. Madeline fills her family tree with Sojourner Truth, Amelia Earhart, and Nefertiti to point out that all humans are related. But if humans are 99.9 percent the same, why do we treat each other so differently?

People We Meet on Vacation

Great Circle
Back to Top