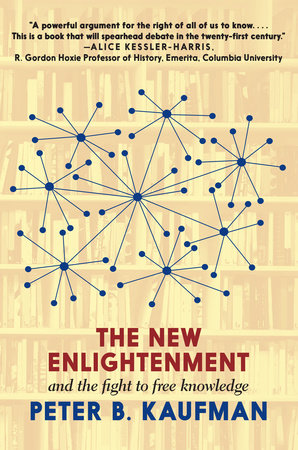 The New Enlightenment and the Fight to Free Knowledge

By Peter B. Kaufman

By Peter B. Kaufman

About The New Enlightenment and the Fight to Free Knowledge

How do we create a universe of truthful and verifiable information, available to everyone?

In The New Enlightenment and the Fight to Free Knowledge, MIT Open Learning’s Peter B. Kaufman describes the powerful forces that have purposely crippled our efforts to share knowledge widely and freely.

Popes and their inquisitors, emperors and their hangmen, commissars and their secret police—throughout history, all have sought to stanch the free flow of information. Kaufman writes of times when the Bible could not be translated—you’d be burned for trying; when dictionaries and encyclopedias were forbidden; when literature and science and history books were trashed and pulped—sometimes along with their authors; and when efforts to develop public television and radio networks were quashed by private industry.

In the 21st century, the enemies of free thought have taken on new and different guises—giant corporate behemoths, sprawling national security agencies, gutted regulatory commissions. Bereft of any real moral compass or sense of social responsibility, their work to surveil and control us are no less nefarious than their 16th- and 18th- and 20th- century predecessors. They are all part of what Kaufman calls the Monsterverse.

The New Enlightenment and the Fight to Free Knowledge maps out the opportunities to mobilize for the fight ahead of us. With the Internet and other means of media production and distribution—video especially—at hand, knowledge institutions like universities, libraries, museums, and archives have a special responsibility now to counter misinformation, disinformation, and fake news—and especially efforts to control the free flow of information.

A film and video producer and former book publisher, Kaufman begins to draft a new social contract for our networked video age. He draws his inspiration from those who fought tooth and nail against earlier incarnations of the Monsterverse—including William Tyndale in the 16th century; Denis Diderot in the 18th; untold numbers of Soviet and Central and East European dissidents in the 20th—many of whom paid the ultimate price. Their successors? Advocates of free knowledge like Aaron Swartz, of free software like Richard Stallman, of an enlightened public television and radio network like James Killian, of a freer Internet like Tim Berners-Lee, of fuller rights and freedoms like Edward Snowden. All have been striving to secure for us a better world, marked by the right balance between state, society, and private gain.

The concluding section of the book, its largest piece, builds on their work, drawing up a progressive agenda for how today’s free thinkers can band together now to fight and win. With everything shut and everyone going online, The New Enlightenment and the Fight to Free Knowledge is a rousing call to action that expands the definition of what it means to be a citizen in the 21st century.

Also by Peter B. Kaufman 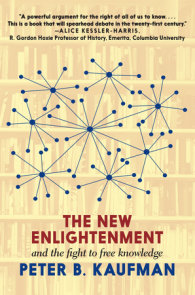 See all books by Peter B. Kaufman

“Peter B. Kaufman’s call for a new Enlightenment couldn’t be more timely, or more necessary. His polemic against those who purport to own knowledge shows that knowledge is freedom and can belong to all or to none. The choice is ours.” —Edward Snowden

“Kaufman’s brilliant exposition of the need for an online Fifth Estate and his ardent support of an online creative commons are both timely and convincing. Everyone who draws on the web for research and intellectual inspiration should read this book.”  —Michael Scammell, author, Solzhenitsyn: A Biography and Koestler: The Literary and Political Odyssey of a Twentieth-Century Skeptic and founding editor, Index on Censorship

“Peter Kaufman has provided a powerful argument for the right of all of us to know.  In forceful prose, he explains how information has been controlled from the invention of printing to today. But, he argues, thanks to the internet, we can still win the battle to create the full and free access to knowledge necessary for self-governing. This is a book that will spearhead debate in the twenty-first century.” —Alice Kessler-Harris, R. Gordon Hoxie Professor of History, Emerita, Columbia University

“Peter Kaufman mounts an impassioned yet prodigiously documented argument for making the public sphere a public good.  He surveys a wide swath of the past three centuries, from the Enlightenment’s Encyclopedia, through the would-be intellectual seedlings of samizdat underground publications under totalitarianism, to the current maelstrom of data and content left unbridled in the hands of private corporations.  From this, he delivers a historically informed account of the striving for information treated not as a commodity but as a public necessity and right.  His arguments could hardly be more timely as we enter the third decade of both the major social media platforms and of Wikipedia – the Enlightenment philosophes’ fantasy of what public enlightenment could become.”  —Peter Baldwin, professor of history at UCLA, Global Distinguished Professor of History at NYU, co-founder of the Arcadia Fund, and author, The Copyright Wars: Three Centuries of Trans-Atlantic Battle

“Peter Kaufman’s erudite tour de force not only explains how the ‘information economy’ works to shape our world, it shows how battles over who and how information is controlled have been with us since the invention of the printing press. Better still, this wonderfully written, eminently readable book shows both how we are still fighting the same battles today—and how today’s battles are different. It lays out clearly why we need to restore control over the information economy and how open knowledge and open learning are keys to that effort.” —Larry Kramer, president of the William and Flora Hewlett Foundation

Looking for More Great Reads?
Discover Book Picks from the CEO of Penguin Random House US
Download Hi Res
The New Enlightenment and the Fight to Free Knowledge

The New Enlightenment and the Fight to Free Knowledge