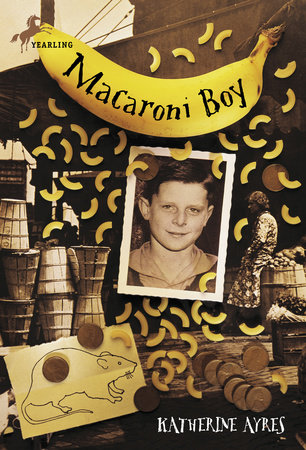 During the Great Depression in Pittsburgh, Pennsylvania, 12-year-old Mike Costa faces off with a school bully and tries to solve the mystery behind his grandfather’s illness and the deaths of two hobos.

It’s 1933 in Pittsburgh, Pennsylvania, and 12-year-old Michael Costa sees hunger and suffering all around him, the result of the Great Depression. Mike’s family is doing all right, though, because they own Costa Brothers Fine Foods, and his Grandpap had been a shrewd businessman who did not trust the banks with his money. Mike’s biggest worries are his Grandpap’s dementia and the torment Mike himself suffers at the hand of Andy Simms, a school bully. When his grandfather becomes physically sick, Mike begins to suspect a connection between his grandfather’s illness, the deaths of two hobos, and the great numbers of dead rats in the warehouse district where they live. Mike, along with his best friend Joseph, investigates and finds that Andy Simms may hold the answer to the mysterious illness. It takes courage for Mike to approach the bully, but by solving the mystery, he will help his grandfather and the entire neighborhood.

Katherine Ayres is a founding member of the Playwright’s Lab at the Pittsburgh Public Theater. She teaches writing at Chatham College, where she also coordinates the Master of Arts programs in children’s and adolescent writing. Her middle-grade novels include Macaroni Boy, Stealing South: A Story of the Underground Railroad, Silver Dollar Girl, North by Night: A Story of the Underground Railroad, and Family Tree.

Ask students to take a photo journey through the Great Depression at the Documenting America Web site (see Internet Resources). Instruct them to use the index and locate specific photographs taken in Pittsburgh. Print the photographs and display them on a bulletin board for further reference.

Family—Describe the Costa family. Discuss Mike’s relationship with Tony. How is Tony more like a brother to him than an uncle? Why are the Costa brothers so upset when Tony decides to join the Civilian Conservation Corps (CCC)? Mike has mixed feelings about Tony joining the CCC. How is he both happy and sad for Tony? Mike’s father keeps telling him to “make the family proud” in school. How does Mike make his father proud at the end of the novel?

Intergenerational Relationships—Start a discussion about Mike’s relationship with his Grandpap. How is Mike in denial regarding his Grandpap’s dementia? What does Mike see about his Grandpap’s condition that his father and uncles don’t see? Have the class talk about why Mike is so determined to prove that his Grandpap is suffering from something more than dementia. Why is his Grandpap such a revered person in the family, especially now that they are in the middle of the Great Depression?

Friendship—How might Mike define friendship? Mike says, “Not every kid had someone like Joseph for a friend.” (p. 152) Describe his friendship with Joseph. What do their families have in common? Discuss whether this contributes to their friendship. Have students write a brief description of each boy from the point of view of the other.

Survival—Mike notices that hobos and men in Shantytown pick up pieces of coal that have dropped off of coal cars from trains passing through. This is considered “insurance against a cold winter’s night and empty pockets.” (p. 11) What does Mike’s family do to help get themselves through these tough times? What do people who have even less than Mike’s family—like Andy Simms and his mother—do? How does Father Cox help the poorest people, the hobos?

Bullying—Discuss the characteristics of a bully. Engage the class in a discussion about why Andy Simms bullies Mike Costa. How and why does Mike’s father support him when he fights Andy? Why is Andy so upset when Mike follows him home? Discuss how Mike deals with Andy’s bullying. Contrast the way Mike handles Andy in the beginning of the novel to the way he handles him in the end. After Mike has helped him, Andy says, “I ain’t gonna say thanks, Macaroni Boy.” (p. 176) Why is it so difficult for Andy to say thanks?

Language Arts—Ask students to refer to the photographs from the Great Depression in Pittsburgh (found in the pre-reading activity). Have them write captions and a brief description of each photograph.

Mike and Joseph are intrigued with the famous gangsters Al Capone and Pretty Boy Floyd. Explain the elements of a graphic novel. Then ask students to research the lives of these men, and write a graphic short story about one of these gangsters.

Social Studies—Though making and selling liquor was against the law during the Great Depression, there were people making money off moonshine. Mike and Joseph think that moonshine might be the cause of Grandpap’s illness, and they have a dangerous encounter with the men who are making it. Find out when Prohibition began in the United States. What was the penalty for making and selling moonshine? When did Prohibition end? What are the laws today for selling illegal alcohol in your state?

Tony Costa joins the Civilian Conservation Corps. Have your class research this organization and the many projects they supported during the Great Depression. Each student should write a short paper describing the social contribution that the CCC made to America during this time.

Art—Refer students to the Songs of the Great Depression Web site (see Internet Resources). Ask them to read the lyrics of “Brother, Can You Spare a Dime?” and “We’re in the Money.” What do these lyrics reveal about the condition of the country in 1933? Ask them to illustrate a record album cover for one of these songs.

Science—Mike’s Grandpap suffers from dementia. Ask students to find out the signs of dementia. What is the difference between dementia and Alzheimer’s disease? Which national organizations are responsible for most of the research regarding the cause, treatment, and cure of this disease? Create a brochure for Mike to read that describes his Grandpap’s condition.

Grandpap and Andy Simms are very ill from eating the catfish they caught in the Allegheny River. Water pollution from sewage sources often caused epidemics of cholera and typhoid in the days before regulations were placed on sewage plants. Ask students to find out the symptoms and treatments for these two deadly diseases. Then ask them to make a poster that Mike and Joseph may have made to warn the people on the Strip about these diseases.Encourage students to find out what local agencies regulate sewage plants and water pollution.

Music—Mike’s mother listens to swing music on the radio. Research this type of music. What is its relationship to jazz and the blues? How might swing music been a solace to people during the Great Depression? Some students may wish to find specific examples of swing music to share with the class.

The vocabulary in this novel isn’t difficult, but students should be instructed to jot down unfamiliar words and try to define them from the context of the story. Such words may include: agitated (p. 29), ruffians (p. 48), and ethylene (p. 65). Students may also want to identify vocabulary that makes specific reference to the Great Depression. Such words may include soup kitchen (p. 22), hobos (p. 44), and Shantytown (p. 22).

Documenting America
http://memory.loc.gov/ammem/fsowhome.html
This site features photos from the Great Depression from the Library of Congress.

Songs of the Great Depression
www.library.csi.cuny.edu/dept/history/lavender/cherries.html
Song lyrics from the early 1930s.

The Strip District
www.clpgh.org/exhibit/neighborhoods/strip/strip_n10.html
This section of the Carnegie Library of
Pittsburgh’s site gives information about
Father Cox and Shantytown.

Neighbors in the Strip
www.neighborsinthestrip.com
This is the official Web site for Pittsburgh’s Strip
District and includes industrial history as well as information about the Strip today.

P.K. Pinkerton and the Petrified Man

The Dragonfly Pool
Back to Top