36 Arguments for the Existence of God Reader’s Guide 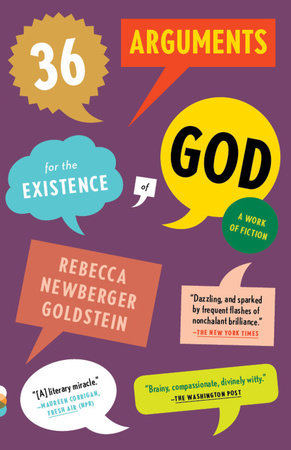 36 Arguments for the Existence of God Reader’s Guide

print
36 Arguments for the Existence of God Reader’s Guide

A hilarious, heartbreaking, and intellectually captivating novel about the rapture and torments of religious experience in all its variety. After Cass Seltzer’s book becomes a surprise bestseller, he’s dubbed “the atheist with a soul” and becomes a celebrity. He wins over the stunning Lucinda Mandelbaum, “the Goddess of Game Theory,” and loses himself in a spiritually expansive infatuation. A former girlfriend appears: an anthropologist who invites him to join her in her quest for immortality through biochemistry. He is also haunted by two people who ignited his passion to understand religion: his mentor and professor, and a six-year-old mathematical genius, heir to the leadership of a Hasidic sect. Each encounter reinforces Cass’s theory that the religious impulse spills over into life at large.

Through the enchantment of fiction, novelist and MacArthur “genius” Rebecca Newberger Goldstein shows that the tension between religion and doubt cannot be understood through rational argument alone. It also must be explored from the inside—from the point of view of individual people caught in the raptures and torments of religious experience in all their variety. And that can only be done from the insider perspective of fiction.

Using her gifts in fiction and philosophy, Goldstein has produced a true crossover novel, complete with a nail-biting debate as well as an appendix with the thirty-six arguments (and responses) that have propelled Seltzer to stardom.

1. This novel takes the reader straight to the heart of one of the major debates of the present day, the clash between faith and reason. Why do you think Goldstein decided to write about this topic in novel form rather than nonfiction?

2. A reviewer in Booklist described this novel as being about “love in all its wildness.” How is this novel about love? What kinds of love?

3. Do the events in the novel prove Cass right in his claim that the religious impulse spills over into nonreligious contexts? How do the various episodes bear out Cass’s belief?

4. Do you consider Cass to be, in some sense, a religious man? Is he a spiritual man? Is there a difference?

5. Does Azarya make the right decision, given that his father has died? Had his father not died, do you think his decision would have been different? Should it have been? Do you see Azarya as a hypocrite, a saint, or something in between?

6. Did you guess who was sending the e-mails?

7. Why do you think the author chose to make Azarya a mathematical prodigy?

8. In your opinion, who wins the debate, Cass Seltzer or Felix Fidley? Who has the better arguments? Why does the debate come to focus on the issue of morality?

9. Is Lucinda’s decision concerning Cass understandable? What kind of woman is she? Is she a sympathetic character?

10. Religion is an immensely serious topic and yet the author chose to write her novel in a mostly comic vein. Why do you think she did that? What role does humor play? Do you find her humor to be sometimes cruel?

11. There are various “tribes” in the novel: the Onuma that Roz studies, the tribe of students around Klapper, the Valdeners. How do these tribes compare with each other?

12. Why does Goldstein tell her tale in the third person, rather than Cass’s first-person voice? Are there times when she leaves his perspective and enters the minds of other characters?

13. Many of the characters are struggling to find meaning in their lives as they decide which paths to take. Do any of them succeed?

14. Which of the thirty-six arguments is the most convincing? Why do you think the author included the appendix?

15. Why does Thomas Nagel’s idea of the View from Nowhere resonate so deeply with Cass? Have you ever experienced anything like the ecstatic sense of getting outside of yourself that Cass describes throughout the novel? Did you know what Cass was talking about with his distinction Cass here/Jesse there?

Rebecca Newberger Goldstein’s novels include The Mind-Body Problem and Mazel. She was awarded a MacArthur Foundation Fellowship (the “genius award”) in 1996 and was elected to the American Academy of Arts and Sciences in 2005. Her previous book, Betraying Spinoza, won the 2006 Koret International Jewish Book Award.

The End of Faith, Sam Harris; The God Delusion, Richard Dawkins; God Is Not Great, Christopher Hitchens; The Mind-Body Problem, Rebecca Goldstein; The Varieties of Religious Experience, William James
Learn More About 36 Arguments for the Existence of God
print

A Confession and Other Religious Writings

The Voice of Reason

How to Read Slowly

The Story of B

On the Genealogy of Morals and Ecce Homo
Back to Top