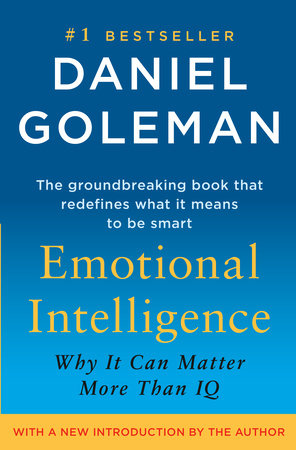 The 1995 publication of Daniel Goleman’s groundbreaking book was heralded by a Time magazine cover that read: “What’s Your EQ? It’s not your IQ. It’s not even a number. But emotional intelligence may be the best predictor of success in life, redefining what it means to be smart.” The hardcover went on to spend more than a full year on the New York Times bestseller list and “emotional intelligence” became a ubiquitous term in languages ranging from English to Portuguese, German to Chinese, Korean to Hindi.

Drawing on groundbreaking brain and behavioral research, Goleman shows the factors at work when people of high IQ flounder and those of modest IQ do surprisingly well. These factors, which include self-awareness, self-discipline, and empathy, add up to a different way of being smart–and they aren’t fixed at birth. Although shaped by childhood experience, emotional intelligence can be nurtured and strengthened throughout adulthood–with immediate benefits to our health, our relationships, and our work.

Daniel Goleman’s new introduction to the tenth anniversary edition traces the remarkable influence of Emotional Intelligence on our culture, on school programs, in business, and on psychological research. It will also answer key questions posed to Goleman during his worldwide speaking appearances.

The Emotional Intelligence: Tenth Anniversary Edition Reader’s Companion is designed to provide additional material for thought and discussion about the diverse topics covered in this fascinating and groundbreaking book. This companion is intended to serve as a starting point to elicit discussion–one that will inspire as many creative questions and comments as there are readers

This book redefines the word “intelligence.” Reading it will change the way you will look at your own emotional landscape–indeed, it will alter the way you interpret human behavior overall. Emotional Intelligence will add new layers of meaning to your daily experience, lending insight to your feelings and to your dealings with others–whether your boss, your mate, your friend, or strangers you meet in passing.

Are You Emotionally Intelligent?

Aristotle spoke of the rare ability “to be angry with the right person, to the right degree, at the right time, for the right purpose, and in the right way.” This is just one example of how emotional intelligence manifests in life.

The Ingredients of Emotional Intelligence:

Self-awareness: the cornerstone of emotional intelligence–a capacity to recognize your feelings as they occur

Emotional control: an ability to manage your emotional reactions, control impulse, and to recover from life’s upsets

Self-motivation: skill at using your emotions in the service of a goal, staying hopeful despite setbacks

Empathy: emotional sensitivity to others; a talent for tuning into others’ feelings, and reading their unspoken messages

Handling relationships: grace in dealing with others–strong social skills are the key to popularity, leadership, and interpersonal effectiveness

How do you measure up?

Science shows that we each have a basic temperament with emotional “setpoints” for each of these capacities . . . but that’s not the whole story.

The brain is extraordinarily flexible. Your initial strengths and weaknesses may be determined by your brain circuitry, but each of these five skills can be improved.

Through conscious effort and learning, we can increase our emotional intelligence at any age.

“Impressive in its scope and depth, staggering in its implications, Emotional Intelligence gives us an entirely new way of looking at the root causes of many of the ills of our families and our society.”–Jon Kabat-Zinn, Ph.D., author of Coming to Our Senses

1. Since it’s initial publication, the phrase "emotional intelligence," or the shorthand, "EQ," has become widespread, showing up in settings as unlikely as the cartoon strip "Dilbert," on boxes of toys that claim to boost a child’s EQ, and in personal ads seeking prospective mates. Where was the first place you heard of emotional intelligence, or EQ? What are some examples of appropriate and inappropriate uses of the term you’ve heard?

2. In 1995, there were only a handful of programs teaching emotional intelligence skills to children. Now, a decade later, there are tens of thousands of schools worldwide that have embraced the concept in the form of programs in "social and emotional learning," or SEL. Have you come across such programs in your personal or professional life? Do you believe it’s possible–or appropriate–for schools to teach emotional skills to students? If parents don’t teach these skills, and schools shouldn’t, who should?

3. The author states that, in business, IQ scores predict extremely well whether a person can handle the cognitive challenges a given position demands. But IQ washes out when it comes to predicting who, among a talented pool of candidates within an intellectually demanding profession, will becomes the strongest leader. As the head of research at a global executive search firm put it, "CEOs are hired for their intellect and business expertise–and fired for a lack of emotional intelligence." How do you apply emotional intelligence skills in the workplace? Has your EQ ever played a part in your career? Has your EQ ever been evaluated in the hiring process?

4. How does the concept of emotional intelligence resonate with outlooks in religious beliefs around the world? Does it reverberate with your own faith?

5. The book portrays a society suffering from a breakdown of emotional intelligence. It cites the following statistics: Violent crimes by young people are up by a factor of four over the past twenty years. Suicides have tripled among young people in the same period, and forcible rape has doubled. Though he acknowledges that factors such as poverty play a role in the creation of violent criminals, Dr. Goleman says, "Every time we read about another senseless murder, it’s a sign of emotional intelligence gone awry." What current or recent events in the news strike you as possible examples of emotional illiteracy? Do you believe there’s hope for improving our collective social life by teaching emotional skills to individuals?

6. Are women more emotionally intelligent than men? Dr. Goleman doesn’t believe so. He finds that each gender has its emotional strengths and weaknesses. Women are trained to be more empathetic–thus, they are often better than men are at picking up "the subtle, unspoken emotional dimension" of communication. On the other hand, women are treated for depression at twice the rate men are. Men are often better at managing their moods–a key component of emotional intelligence. What other patterns of strengths and weaknesses might be attributed to the sexes, respectively? Do you believe boys should be trained to be more aware of others’ moods? Do you think girls could be given skills that would help them be more optimistic? Do you believe there are innate differences in the emotional capacities of the genders?

7. Contrary to popular wisdom, Emotional Intelligence argues that venting anger–by yelling, for instance–can cause more harm than good. The author believes catharsis has an undeserved popularity as a method of handling anger. He cites studies that show that the net effect of lashing out is to prolong rage rather than to end it. Do you think it’s desirable–or possible–to avoid emotional displays of anger? In what other ways can extreme frustration be expressed? Have you ever regretted an unplanned outburst of rage? Ever seen a tantrum produce a desired result?

8. According to the author, emotions are impulses that compel us toward–or away from–various courses of action. "Formal logic alone can never work as the basis for deciding who to marry or trust or even what job to take; these are the realms where reason without feeling is blind." He believes that gut reactions and intuitions are more than mere momentary whims, that they are sophisticated calculations based on a quick-but-careful review of past experience. Are your important life decisions based more on rationality, or on an emotion-based "gut instinct?" Can you recall any occasion when an instantaneous decision reached by your emotional circuitry steered you right . . . or wrong?

9. A previous bestselling book, The Bell Curve, asserts that one’s intellectual capacities are fixed: The Bell Curve’s authors claim there’s no way to transcend the IQ you were born with. Emotional Intelligence defines intelligence more broadly, positing that there is an emotional brain that greatly influences the workings of the rational brain, that both contribute to one’s level of intelligence, and that emotional skills can be improved on. Which view of intelligence do you find more valid, and why?

10. Tests of aspects of emotional intelligence, such as "The Marshmallow Test," have proven to be strong predictors of future success. Some four-year-olds who took "The Marshmallow Test" were able to restrain their desire for a treat in favor of a greater reward later. This triumph over the urge for immediate gratification turned out to have a far-reaching impact later in life. As high-school seniors, those who had "passed" the test "were more academically competent: better able to put their ideas into words, to use and respond to reason, to concentrate, to make plans and follow through on them, and more eager to learn. Most astonishingly, they had dramatically higher scores on their SAT tests." Given such evidence that emotional skills affect one’s capacity for success, do you believe children should be given standardized tests that measure not just IQ, but also emotional intelligence?

12. Empathy is a key component of emotional intelligence; sensitivity to others’ feelings is a prerequisite to developing strong relationships. Researchers believe that 90% of emotional communication is non-verbal. What are some examples of unspoken cues people use to express their feelings?

13. Dr. Goleman says modern medical care often lacks emotional intelligence. "Medicine’s inattention to the impact of emotions on illness neglects a growing body of evidence which indicates that emotional states can play a significant role in vulnerability to disease and in the course of their recovery." He claims that "there are many ways medicine can incorporate new knowledge about the impact of emotions on health into its view of patient care." Have you, or has someone you know, experienced emotional insensitivity at the hands of medical professionals? How far should the health-care delivery system go in concerning itself with patients’ emotion?

Daniel Goleman, Ph. D., is also the author of the worldwide bestseller Working with Emotional Intelligence, Destructive Emotions, and is co-author of Primal Leadership. Nominated twice for the Pulitzer Prize for his work at the New York Times, he is currently a Fellow of the American Association for the Advancement of Science. He is preparing a major new book for Bantam for publication in 2006.

The Laws of Human Nature

Get Out of Your Own Way

The Practice of Groundedness

How to Own Your Own Mind

Rewire
Back to Top