The Center of the Universe Reader’s Guide 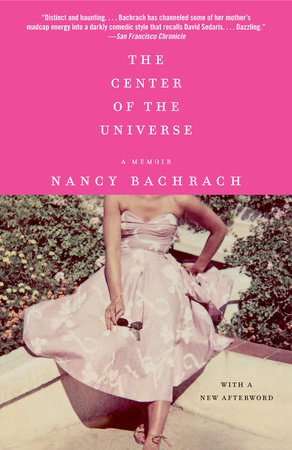 The Center of the Universe Reader’s Guide

print
The Center of the Universe Reader’s Guide

“I am the center of the universe,” she says, looking at each of us in turn, making sure we appreciate the significance. “And everyone else is a star revolving around me.”
This is a confession. A revelation. A pronouncement. This is the way of the world.
She is Norma Desmond, descending the staircase in Sunset Boulevard, eyes wide and frozen, getting ready for her close-up. She is Salome, stripping the veil off the face of the cosmos. She is my mother Lola Hornstein.
And she is crazy.

The Center of the Universe is Nancy Bachrach’s marvelously witty memoir about life with her brilliant, irresistible, mentally ill mother, an unforgettable story of a family in transformation, and an unputdownable story sure to evoke both laughter and tears.

Nancy is an émigré in Paris, living the grand cru life when bad news comes from her hometown of Providence. Her father, Mort, has been found dead aboard his cabin cruiser, the aptly named Mr. Fix It.  Her mother, Lola, the self-proclaimed center of the universe, is at a seaside hospital, lingering in a coma. Nancy’s brother Ben (formerly Mr. Junior Rhode Island, a nine-and-a-half fingered piano prodigy and eventual surgeon) and their sister Helen (the wild child, who holds a doctorate in abnormal psychology) sit by their mother’s ventilator, waiting for signs of life while eyeing the plug. Thus begins a family reunion, where preparations are underway for a “double funeral” over Memorial Day weekend. The trip home leads Bachrach to ruminate on her mother’s larger ancestral psychodrama—from Aunt Flossie’s vapors to Aunt Lily’s neurasthenia and Aunt Annie’s dipsomania—as she remembers the chaos of growing up with the unpredictable Lola. But Lola has one more surprise up her sleeve: A miracle recovery so unbelievable it can only be the truth.

1.       Tolstoy wrote that “All happy families are alike, and all unhappy families are unhappy in their own way.” How is the family in this book unique?
2.      Lola, the book’s main character, proclaimed herself to be “The Center of the Universe.” Why was this traumatic for her family?
3.      The author’s father, Mort, was nicknamed “Mr. Fix It.” Was his death just bad luck? An unavoidable accident? Predictable? Fate?
4.      “Lies have latitude and longitude. Lies can be extended, magnified, hedged, contradicted, circumvented, and denied. The truth, on the other hand, is a forkless road with a dead end.” Whose philosophy is this in the book? And how does it shape her life and her family’s?
5.      The author’s brother Ben—who was born with three thumbs—was a piano prodigy and eventual surgeon. Did his handicap add to his motivation?
6.      Ben “made Chopin the sound track of my childhood—and the melancholy nocturnes and heartbreaking ballades that poured out of him poured right into me.” What role does music play in the book, and how does it help heal the family?
7.      Writing about her little sister, Nancy says: “Poor Helen was born after the roles of ‘smart’ and ‘musical’ were already cast and had to create a new identity from scratch.” How did being the third child shape “Hellish”?
8.      This is a story about a family that healed itself.  What resources did the author and her siblings call upon to turn their dysfunctional childhood into highly-functioning adult lives? Do you think the problems they faced contributed to their close bond?
9.      “Play the hand you’re dealt,” Nana said. “Count. Don’t try to beat the odds. No bluffing. And you gotta know when to fold.” How were Nana’s rules of poker a metaphor for guiding her three grandchildren? Was she their “savior?”
10.  Describing Lola after the accident, Nancy writes: “Lola’s mind may lack torque, but her heart is a cheerful rudder.” Given a choice between brains and heart, which would you prefer?
11.  After all the years of treating her mother “like she was a virus I might catch,” what precipitated Nancy’s realization that she loved Lola?
12.  “This is a book about second chances,” the author has said. How does she use her second chance with her mother?
13.  Lola wanted the memoir’s title to be Love Story. In what ways is this book a “love story”?
14.  Nancy learned from a high school science experiment that “you never really know what’s going on inside anything.” How does that shape her thinking about Lola after the accident?
15.  After the accident, when Lola began to deteriorate, Nancy writes: “I may represent Disaster, but I am also Rescue.” Was this true?
16.  After the accident , the neurologist told Nancy that “hope would be counter-productive.” How would you react if a doctor said that to you?
17.  Despite the gravity of the subject—life with a charismatic but mentally ill mother—this memoir is filled with humor.  The author has commented that her family wasn’t laughing at the time, “but through a long lens (and after enough therapy), this tragedy revealed a comic underbelly.” How did her dark humor affect you?
18.  James Thurber wrote that humor is chaos in retrospect.  How did Nancy’s chaotic childhood shape her voice and her perspective?
19.  A reviewer commented that this book “says the unsayable.” Do you agree? Can you give examples? What impact did that have for you when you were reading the story?
20.  Another reviewer called the story “unsentimental – and all the more moving for it.” How did the author’s restraint (and lack of self-pity) affect your enjoyment in reading the book?
21.  During a radio interview with Nancy Bachrach, the interviewer asked whether Lola had ever “apologized” to her children.  Did Lola owe her children an apology for the way they were raised?
22.  One reviewer wrote: “By the time the book ends, love has conquered chaos, tenderness flows like a healing balm and Lola’s insistence that she is ‘the center of the universe’ doesn’t seem so crazy after all.” Do you agree?
23.  What role do dreams play in the story? Does Nancy’s dream on the plane home from Paris (about “the old woman in the hospital bed, and the blank newspaper that only the nun could read, and the clock without hands”) portend the future?
24.  In the Author’s Note, Nancy writes: “Memory is so fragile that even perspective can distort it.” What does it mean to write a memoir after admitting that memory is flawed?
25.  Nancy writes that her ancestors’ craziness was their “biochemical itinerary.” How much do genes control character? What role does experience play? And how did Lola’s childhood environment affect her sanity?
26.  The author summarizes a major theological argument: If God is good and has unlimited power, why is there evil in the world? “Is god up there listening, but not interested in helping? Or would he like to help but he’s unable to intervene? Which is worse? Does it matter?” How would you respond to these questions?
27.  “We all believe what we need to believe no matter how cultivated our skeptical principles.” Is this a definition of hope? Is it true in your own life?

Nancy Bachrach worked in advertising in New York and Paris, spinning hot air like cotton candy, glorifying her clients’ beloved denture adhesives and powdered orange-juice substitutes. Before that, she was, sequentially, a clumsy waitress at Howard Johnson’s, an overzealous customer service rep fired for making genuine apologies, a stenographer for an insomniac poet, and a teaching assistant in the philosophy department at Brandeis University, where she was one chapter ahead of her class. She lives in New York City.

Are You My Guru?

The Rules of the Tunnel

The Devil, The Lovers and Me