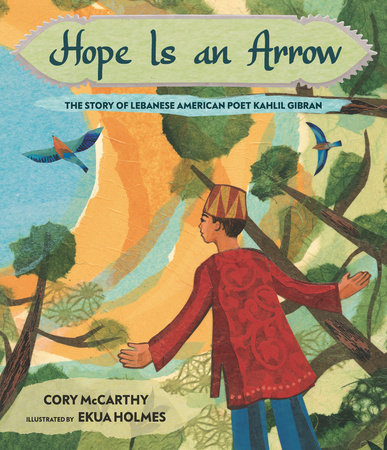 Hope Is an Arrow

About Hope Is an Arrow

Before Kahlil Gibran became the world’s third-best-selling poet of all time, he was Gibran Khalil Gibran, an immigrant child from Lebanon with a secret hope to bring people together despite their many differences. Kahlil’s life highlights the turn of the twentieth century, from the religious conflicts that tore apart his homeland and sent a hundred thousand Arab people to America, to settling in Boston, where the wealthy clashed headlong with the poor. Throughout it all, Kahlil held on to his secret hope, even as his identity grew roots on both sides of the Atlantic. How could he be both Kahlil Gibran, Arab American, and Gibran Khalil Gibran, the Lebanese boy who longed for the mountains of his homeland? Kahlil found the answer in art and poetry. He wrote The Prophet, an arrow of hope as strong as the great cedars of Lebanon and feathered by the spirit of American independence. More than a hundred years later, his words still fly around the world in many languages, bringing people together.

Striking. . . Holmes’s bold, color-saturated collages and acrylics are a stirring match for McCarthy’s poetic prose—the family sails across ‘the deeper, darker Atlantic Ocean, which murmured like a giant in its sleep’—in a telling that emphasizes the figure’s complexity.
—Publishers Weekly (starred review)

Hope Is an Arrow