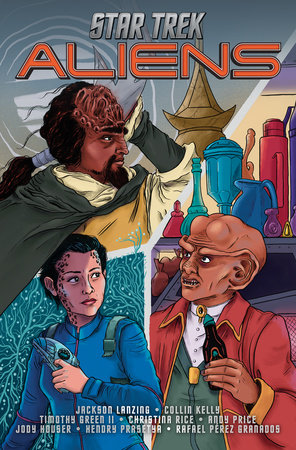 Dive deeper into the world of Star Trek with special one-shot stories focusing on the memorable aliens of the series: Klingons, Ferengi, and Trill!

First, the story of Kahless the Unforgettable, from the death of his coward brother Morath to his victory at Three Turn Bridge. Then, follow Quark on an unforgettable adventure to Ferenginar, where mother, brother, and brother challenge the very core beliefs of Ferengi culture. In the final story, someone is following Vanah, a research student and ex-applicant to the Trill Symbiont Initiate Program, after a life-changing event on a joint Trill-Federation science expedition. Delve into the world of the Trill in this suspenseful tale of tradition, independence, and survival.