The Things We Do for Love Reader’s Guide 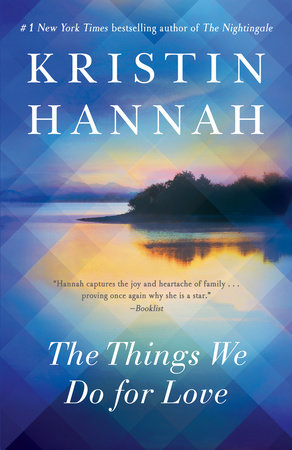 The Things We Do for Love Reader’s Guide

print
The Things We Do for Love Reader’s Guide

1. Kristin Hannah begins her novel with a quote from writer/ philosopher Henry David Thoreau: “Things do not change; we change.” Do you think the events of the novel are responsible for Angie’s personal growth?

2. The Things We Do for Love focuses on two women, both in relationships burdened by an overwhelming problem.Why does Conlan and Angie’s relationship weather the storm whereas Lauren and David’s relationship does not?

3. Lauren wonders about her mother’s emotional neglect, “So why did it still hurt, after all these years? You’d think a heart would grow calluses at some point.” Why didn’t Lauren’s heart grow calluses? What was the source of hope before meeting Angie? How was she able to envision a better life for herself?

4. Descriptions of the town of West End proliferate in the novel. It is a place characterized by dramatic fluctuations in weather and even in population between the tourist season and the quiet winters. It is a small town, but it holds radically different associations for each character. How is Angie’s West End different from Lauren’s West End or David’s West End? In what ways is the town itself a character in the book?

5. Lauren’s childhood was marked by a dearth of two important things: love and money. Does Lauren, consciously or not, think that these two things go together? Is she attracted to David’s family money, or does she love him in spite of it?

6. Does Angie believe that her mother can communicate with her late father?

7. “Lauren wanted to push the hair out of her mother’s eyes but she didn’t dare. It was the kind of intimacy that could ruin everything.” Why is Lauren afraid of establishing intimacy with her mother? What does she fear would result from these impulses?

8. It is much easier for Lauren to tell her mother that she’s pregnant than it is for her to tell Angie. Why?

9. Were you surprised by Lauren’s decision to have the baby? What aspects of Lauren’s personality may have served as clues toward predicting what decision she would eventually make?

10. Lauren’s relationship with Angie gives her a new, powerful confidence that she has never felt before. How does this confidence change the way Lauren interacts with her world? Does it bring her closer to the other people in her life, or does it alienate her?

11. David’s mother tells Lauren that “motherhood changes who you are.” How do you think that having a child changes a woman? Angie is the only woman in the novel who is not technically a mother. How is she different from the ‘mothers’ that surround her?

12. There are a handful of times in the book where Angie prays. Does Angie strike you as a religious woman? How does she relate to her family’s Catholicism? For what (or whom) does she pray?

13. Conlan and Angie’s first few encounters on their road to reconciliation take place in their bedrooms. Why do you think it is easier for them, after having been married for so long, to show their love for each other physically before having a discussion?

14. Obviously, food plays a large role in the DeSaria family’s traditions and daily life. They attribute to a good meal the power to heal and to conjure feelings of joy and togetherness. But food has negative connotations in the novel as well: lack, loneliness, and inadequacy. How are Lauren and Angie’s relationships with food similar?

15. When Conlan shows up at the cottage on Christmas Eve, he says that he came to meet Lauren. Why is meeting Lauren such a priority for him? What do you think his expectations of Lauren were? How does his impression of her after they meet change his mind about Angie’s decision to take Lauren in?

16. Lauren remarks about her unplanned pregnancy: “A smart girl would have done things differently.” Do you agree with that statement?

17. When Lauren asks Angie to raise her unborn baby, Angie is immediately certain that it would be “doing the wrong thing.” What is Angie really worried about, and why? How do the concepts of right and wrong play into this life-altering decision?

18. Conlan tells Lauren that she did a grown-up thing, which is not the same as being a grown-up. Do you think that Lauren matures throughout the course of the novel?

19. Lauren tells David that if she hadn’t gotten pregnant they might have stayed together forever. How did the baby create weakness in their relationship, or did it just illuminate a weakness that already existed?

20. When Lauren left the hospital with her baby in tow, she followed her heart and struck out on her own with no safety net in sight; but she also broke a promise that she’d made to someone she loved, and didn’t stick around to defend her choice. Do you think that what Lauren did was brave or cowardly?

21. What do you think the future holds for Angie? Do you think that she’s truly ready to help raise a baby, under her own roof, that will never be her own? What strategies do you think she should employ to make it work?

Learn More About The Things We Do for Love
print

Picture Perfect
Back to Top