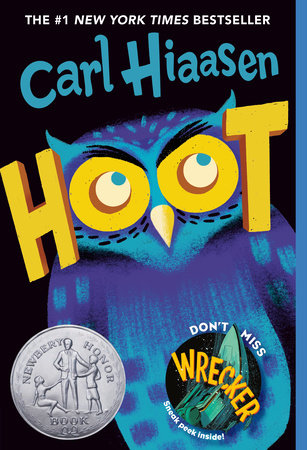 In this humorous ecological mystery, three unlikely middle-school kids lead a protest to save endangered burrowing owls that live on the property where a Mother Paula’s All-American Pancake House is about to be built.

Roy Eberhardt is accustomed to being the new kid in school, so when his father’s job moves the family to Coconut Cove, Florida, Roy enters Trace Middle School with the full knowledge of what it feels like to have no real friends. What he doesn’t expect is an immediate encounter with the school bully. Dana Matherson is everyone’s fear, but at the very moment he mashes Roy’s face against the school-bus window, Roy notices a barefoot boy running away from the school bus and across a field. His curiosity about the boy leads him to Beatrice, the boy’s stepsister, and Beatrice leads him to the burrowing owls that are about to become homeless because a Mother Paula’s All-American Pancake House is about to be built on the land where the owls live. The three unlikely allies take on the construction guys, the corporate PR honchos, and the police—all for the sake of the owls.

Carl Hiaasen, a columnist for the Miami Herald, is the author of many bestselling novels for adults, including Sick Puppy and Basket Case. He says that he has been writing about Florida since he was six when his father gave him a typewriter. Hoot, a 2003 Newbery Honor Book, is Mr. Hiaasen’s first novel for young readers.

The U.S. Fish and Wildlife Service is the agency that declares a species endangered. It has classified the burrowing owl as a candidate species. Ask students to find out what this classification means. Then have them research the Endangered Species Act (ESA) and the Migratory Bird Treaty Act. Engage the class in a discussion about why it is important for the government to have laws that protect animals.

Belonging—Roy never quite feels that he belongs anywhere. Coconut Cove is the tenth school that he has attended, and he doesn’t feel that he has a hometown. Discuss Roy’s attempt to belong at school. What finally makes him feel that he belongs in Florida? How is being labeled an outcast related to belonging? Discuss why Mullet Fingers and Beatrice might be considered outcasts. What other characters in the book display a need to belong? What can schools do to help new kids like Roy feel welcome?

Bullying—Ask the class to brainstorm behaviors that characterize a bully. What causes a person like Dana Matherson to become a bully? Discuss the difference between acting tough and bullying. Why is Roy upset when he gets the reputation of being a tough guy after he beats up Dana? Sometimes a person who is being bullied becomes a bully. How does Mullet Fingers’s mother bully him? How might people like Leroy Branitt consider Mullet Fingers and Beatrice bullies? Have the class discuss ways of dealing with school bullies.

Family—Ask students to discuss Roy’s relationship with his parents. Why is Roy so conscious of being an only child? How might his life be different if he had a sibling? Compare and contrast Dana’s and Mullet Fingers’s families. Discuss why Mullet Fingers is so willing to trust Beatrice, his stepsister. Why does she feel such a need to shield him from his mother? Discuss whether there is a correlation between Mullet Fingers’s family life and his desire to save the owls.

Values in Conflict—Mrs. Eberhardt tells Roy, “Honey, sometimes you’re going to be faced with situations where the line isn’t clear between what’s right and what’s wrong. Your heart will tell you to do one thing, and your brain will tell you to do something different.” (p. 160). Discuss places throughout the book when Roy’s heart tells him one thing, and his brain tells him something else. How do his heart and his brain come together at the end of the novel?

Friendship—Roy’s mother worries that he doesn’t have friends, so she is delighted when Roy brings Beatrice home. Discuss the friendship that develops between Roy and Beatrice. What does each individual gain from the relationship? How does Mullet Fingers fit into the friendship? When
Roy gives Mullet Fingers his name so that he can get medical help, Mrs. Eberhardt says, “Your father and I don’t want to see you get in trouble. Even for the sake of a friend.” (p. 159) Discuss whether Roy’s decision to help Mullet Fingers is for the sake of friendship.

Language Arts—Ask students to write a front-page article for the Coconut Cove newspaper about the demonstration to save the owls. They should include interviews with Roy and Leroy Branitt, the supervising engineer of Mother Paula’s.

Miss Hennepin, the vice-principal of Trace Middle School, instructs Roy to write a sincere letter of apology to Dana Matherson for busting his nose. Read the letter that Roy writes and discuss whether the letter fits the “sincere” requirement made by Miss Hennepin. (p. 32) Then ask students to write a letter that might meet the vice-principal’s approval.

Social Studies—Officer Delinko says that pulling up the surveying stakes at Mother Paula’s isn’t vandalism, but is considered “trespassing and malicious mischief.” (p. 7) Have students find out local laws regarding trespassing. Invite a law enforcement officer to speak to the class about how malicious mischief leads to vandalism.

Math—The survey stakes are pulled up at the future site of Mother Paula’s All American Pancake House. Ask students to call several surveying companies and find out an estimated cost for surveying the property lines of three acres of land. The policeman says that you can’t charge vandalism without monetary damage. Calculate the monetary damage to Mother Paula’s, since the land must be surveyed again.

Career Exploration—Roy doesn’t exactly know what his father does for a living, but he knows he works for the government in some type of law enforcement. Brainstorm a list of careers related to law enforcement, and find out the training, salaries, and job descriptions for these positions. Then ask the class to decide what they think Roy’s father does.

Drama—In a telephone conversation, Chuck Muckle, the vice president for corporate relations for Mother Paula’s, chews out Leroy Branitt, the supervising engineer charged with guarding the property. Why is Mr. Muckle so angry with Leroy Branitt? Ask students to dramatize the conversation between the two men.

Roy gains a greater appreciation of wildlife when
the Eberhardts’ take a Sunday afternoon boat trip through the Everglades. Ask the class to study the Everglades’ ecosystem (www.nps.gov/ever/eco). Divide the class into groups and ask each group to select one of the endangered species in the Everglades National Park and to plan a campaign for saving the species. This may include posters, pamphlets, letters, etc.

Visual Arts—Roy and some of his friends stage a Save the Owls protest at the Mother Paula’s construction site on the day of the groundbreaking ceremony. Ask students to create posters that visually interpret the following slogans used by the protesters:

MOTHER PAULA DOESN’T GIVE A HOOT ABOUT OWLS!
BIRD KILLERS GO HOME!
SAVE THE OWLS, BURY THE BUTTERMILKS!

Kids’ Planet
www.kidsplanet.org/factsheets/burrowingowl.html
This site provides a fact sheet on the burrowing owl.

KidsHealth
http://kidshealth.org/kid/feeling/emotion/bullies.html
This site focuses on dealing with bullies.


Learn More About Hoot
pdf
Back to Top