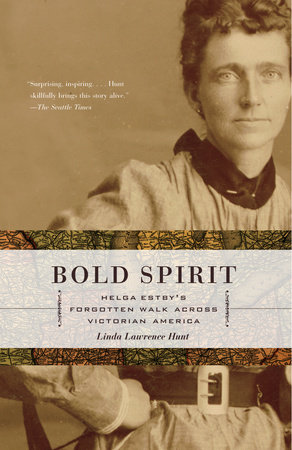 The introduction, discussion questions, and suggestions for further reading that follow are designed to enhance your group’s discussion of Bold Spirit, a moving account of a Victorian woman’s extraordinary life, her walk across the United States, and the reasons for her family’s subsequent suppression of this important historical narrative.

Helga Estby was born in Norway in 1860, emigrated with her mother to Michigan in 1871, became pregnant out of wedlock at age fifteen, was a pioneer homesteader on the prairies of Minnesota by age sixteen, gave birth to many children and watched some of them die, and moved with her husband and children to Spokane, Washington, to start a better life. She once sued the city of Spokane Falls when she was injured in a street accident and won an award at a time when this was unthinkable for a woman and mother, and in 1896, she walked across the entire United States with her eldest daughter Clara. A prolific reader and writer, Helga wrote a book about her cross-country adventure, a book that would have been an invaluable contribution to history, had two of her daughters not burned it soon after Helga’s death.

When foreclosure threatened her home, and her husband was unable to earn a living, Helga accepted a wager from mysterious “Eastern parties,” who promised to pay $10,000 if she and her daughter could cross the United States on foot in seven months, earning their own way as they walked. They succeeded against all odds, but the money did not come through as promised. Helga returned home destitute, to public disgrace and a family’s rage: two children had died of diphtheria in her absence, and the surviving children had been forced to stay in an unheated shack for fear of contagion. These children never forgave their mother for deserting them.

Since almost no evidence remains of Helga’s journey, Linda Lawrence Hunt’s book transcends the usual work of the historian. Her patchwork narrative in Bold Spirit is all the more moving in that it teases life and meaning out of the very little evidence that escaped her family’s determination to erase Helga’s story. Hunt focuses on the reasons for this silencing, and opens a window on the ways in which cultural beliefs and customs influence family histories. In the process, she provides a vividly insightful account of one woman’s courage and daring.

1. Why has Hunt titled her book Bold Spirit? How does Helga demonstrate qualities of boldness? In what ways does she defy the expectations of her time and culture?

2. Raised in a cultured environment in Norway, Helga was bilingual, while her husband Ole was never fully comfortable with English. When the young family lived in an isolated sod house on the Minnesota prairie, only Norwegian was spoken because of Ole. How did Helga’s higher level of education and ease with both written and spoken English affect her position in her family?

3. Hunt had to rely on a great deal of imagination and speculation to write this story, as firsthand evidence is now so sparse. But rather than try to smooth over this problem, she makes it an important part of the story. Is this strategy effective?

4. Two of Ole and Helga’s children died of diphtheria during her absence as she walked across the country with Clara. Hunt emphasizes that doctors did not know the cause of the disease, which added to the general fear and the tendency to assign blame. “Although doctors’ experiences showed that even the very neatest families living in commodious homes could suffer as much as those in small squalid hovels, the general perception prevailed that poor housekeeping contributed to a family’s tragedy” [p. 36]. What kind of pressure would this have placed on women and especially on mothers? How did such perceptions contribute to Helga’s family’s inability to ever forgive her for what happened while she was gone?

5. Helga and Ole decide to move to Spokane as a result of early marketing campaigns designed to draw people to that area. Hunt writes, “One brochure particularly addressed the quality of educated people who lived in Spokane Falls and the educational opportunities for children, a topic that would have drawn Helga’s attention” [p. 41]. And later, when Helga decides to walk across the country on a wager, in order to win money to save their home from foreclosure, she is part of a marketing campaign to sell the new bicycle skirts for the “new woman.” What significance does advertising have in this story and in the westward expansion of a young nation?

6. In 1888 Helga sued the city of Spokane Falls after slipping on a city street. “Her refusal to remain invisible and silent on the effects of a public event on her private domestic life clearly countered prevailing custom. It was so unusual for women to testify in court, that their public presence often caused a sensation” [pp. 50–51]. What does this event reveal about Helga’s character? How might this experience have influenced her later decision to take the mysterious wager?

7. When the family moves again, from Spokane to Mica Creek and “Little Norway,” Helga becomes part of a close-knit community. “The Mica Creek neighborhood, with its many Norwegians and Swedish immigrants, had a reputation for common decency, neighborliness, and support during difficult times” [p. 65]. What are some of the effects, positive and negative, that such a community might have had on someone like Helga?

8. Hunt recounts a story that Helga told to her children, about how she as a child questioned the story of Jonah and the whale, telling her religion teacher that it did not seem realistic or possible. Her teacher’s reply, “Don’t you know, Helga, that anything and everything is possible with God?” [p. 81] became a “life-motto” for Helga. What is the significance of this story? What does it reveal about Helga? What effect might such a belief have had in the face of fire, disease, deaths of children, and economic hardship?

9. One of the issues in the culture of Helga’s time was a belief in the physical inadequacy of women. How did this idea shape women’s roles in the family? How would someone like Helga, with her self-reliant mind and physical stamina, have seen herself in relation to this idea of women’s fragility?

10. Helga was a lifelong reader who understood the power of stories. She knew how to gather and hold the attention of local newspapers as she and Clara walked across the country, and she wrote a book about her adventures. Why did her daughters find it necessary to erase this story? Why did her children find it impossible to forgive their mother for what happened in her absence? What sort of cultural beliefs, or family dynamics, kept them from seeing their mother’s story as something to treasure?

11. When questioned by family, friends, and reporters about her reasons for undertaking the journey, Helga always replied that her motive was to make money to save the family farm from the threatened foreclosure. Did she have other motives as well?

12. Although the issue of women’s skirts might seem trivial today, in the late nineteenth century it was linked with the most basic civil rights, such as women’s right to the vote. Hunt quotes one advocate of dress reform as saying, “Until a woman is allowed to have ankles, there is no hope for her brains” [p. 119]. Is there any comparable issue with women’s clothing in today’s American society?

13. Clara plays an important part in this adventure, but there is very little surviving evidence of who she was. The reader learns that she was “sick of the trip” [p. 164], that she disagreed with her mother politically, and that she later distanced herself from her family and changed her name. Is it possible from the evidence Hunt includes to get much of sense of what kind of person Clara was and what effect this journey might have had on her?

14. Hunt writes, “When an experience seems incomprehensible to others, it can contribute to the silencing of stories. None of Helga’s neighbors could imagine what she encountered because such an endeavor existed outside their own knowledge” [p. 248]. In spite of the tragedy in her life, Helga’s is in many ways a story of the power of imagination. What cultural forces of Helga’s time worked against such acts of imagination for women and for men? And how did seemingly “reckless” choices, such as Helga’s, affect the culture in turn? Are there similar risky choices, or acts of imagination, in the world for women today?

15. In the concluding chapter, Hunt presents six threads that contributed to the silencing of Helga’s story. Do they accurately characterize the silencing of stories in other families and cultures? How widespread is such a practice?

16. How do family stories, passed down from generation to generation, both enhance and influence larger histories of a given place or time?

Linda Lawrence Hunt, a former associate professor of English at Whitworth College in Spokane, Washington, now directs The Krista Foundation for Global Citizenship. An engaging speaker and freelance writer, with articles in regional and national publications, she traveled to Norway and throughout America to reconstruct this silenced story of Helga Estby’s epic journey.

The Tin Ticket
Back to Top