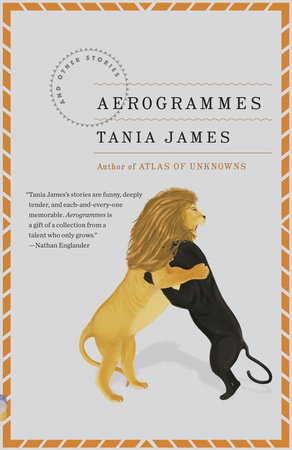 The questions below are intended for use in facilitating discussions of the stories and themes in Tania James’s marvelous story collection Aerogrammes. Set in locales as varied as London, Sierra Leone, and the American Midwest, James’s short fictions capture the yearning and dislocation of young men and women around the world. In the title story, two aging residents of a nursing home build a sustaining bond through problematic relationships with absent sons. In the heartbreaking “What to Do with Henry,” a young African orphan forges a critical relationship with a chimpanzee, who is consigned to life in captivity.  In “Light & Luminous,” a gifted dance instructor succumbs to the desire to change the color of her skin. With wit, compassion, and an unerring sense of the absurd, James introduces us to a host of delicate, complicated characters who find themselves separated from their families and communities by race, pride, and grief.

From the highly acclaimed author of Atlas of Unknowns (“Dazzling . . . One of the most exciting debut novels since Zadie Smith’s White Teeth”—San Francisco Chronicle; “An astonishment of a debut”—Junot Díaz), a bravura collection of short stories set in locales as varied as London, Sierra Leone, and the American Midwest that captures the yearning and dislocation of young men and women around the world.

1. Why is the book called Aerogrammes? What is the thematic implication of this title, and how does it transcend the title story? Discuss the symbolic meaning, to James, of the aerogramme.

2. On the surface, “Lion and Panther in London” tells the story of two wrestling heroes, “Gama the Great” and Imam, the “Panther of the Punjab,” who come to London to claim the world title. But on a deeper level it is also a story about the tensions between East and West, and in particular the relationship between India and Britain. Can you discuss how these themes infuse the story with tension and meaning? And how they relate to the story’s title? Look in particular at the propaganda about Gama and Imam with which James has elected to begin the story.

3. “Lion and Panther in London” ends with a paragraph that begins: “He says this so softly he could be talking to himself, if not for that one tender word, which Imam has not heard from him in years. It is as if they are eight and twelve again, and Gama has set him apart from everyone else—chotu. Imam feels himself rising to the word. Inglorious as it is, this is something for once only he can be.” How does the intimacy and emotion of this final paragraph reframe the story for the reader? How do these closing lines recast your perception of the nature of the brothers’ journey?

4. In the story “What to Do with Henry,” how can Henry’s struggle to fit in and find a sense of belonging at the zoo be read as an allegory of our human strivings?

5. What do you think of Pearl’s decision, in “What to Do with Henry,” to travel to Sierra Leone and to take responsibility for Neneh? What would you have done in this situation? Why do you suppose Pearl was prepared to adopt her husband’s illegitimate child?

6. Discuss Pearl’s thoughts when she first sees Henry. Look in particular at the paragraph on page 29 that begins, “As Pearl reached for the chimp, she felt a rejuvenating sense of certainty, a rectitude with no moral or rational ground.” What is the nature of her epiphany here, and why is Henry the catalyst for it?

8. On page 41, Neneh reflects that “by rescuing [Henry], they had ruined him.” She also wonders “if Pearl had felt similarly about rescuing her.” Discuss the parallels between Neneh and Henry’s journeys. Look in particular at the passage, on page 37, where Pearl tells Neneh that Henry “can’t be two things at once.”

9. How do you feel about the story’s conclusion, and the final confrontation between Henry and Neneh at the zoo? When James writes, “And though he could not talk, they were communicating in a wordless language all their own, and he was thanking her, he was telling her that he loved her, he was promising her that she was not alone,” do you believe her? Is this intended to be taken at face value, or ironically?

10. What is The Scriptological Review, and what purpose does it serve? How and why is Vijay using it to mourn his dead father?

11. Discuss the relationship, in the title story, between Hari Panicker and May Daly. Is it harmful or sustaining? How does James use their struggles with their sons—Mr. Panicker’s actual son, Sunit, and May’s fictive son, Satyanand Satyanarayana—to illuminate their personal struggles?

12. Is Mr. Panicker in denial? Is May? How did you feel about the story’s conclusion?

13. What is the significance of Minal Auntie’s trip to the beauty salon in “Light & Luminous”? Do you think James intends the name of the facial Minal Auntie receives (the “Fairness Facial”) as a pun, and, if so, what does the pun imply about skin color? Look also at Aartie’s description of Minal Auntie’s advice to her on page 133—“She said your color is your color, and there’s nothing you can do about it”—and Minal Auntie’s recollection of her own intentions at the time: “It seemed, at the time, like honesty, meant to equip the girl with a tougher skin” (page 134). James uses the word “skin” both literally and figuratively here. Why, and to what end?

14. How did you feel about the premise of “Girl Marries Ghost”? Did you find this story essentially comic or essentially tragic? What are the benefits of marrying a ghost?

15. Discuss James’s use of humor in the collection. Many of the book’s most heartbreaking stories are also motored by absurdity and humor. Where did you find this to be the case, and to what effect?

16. Themes of displacement and exile, of physical or emotional alienation and dislocation, reverberate throughout many of Tania James’s stories. Where do you think these predicaments are most powerfully and tellingly expressed? What do you think James is trying to tell us about the nature of the immigrant experience in America and abroad?

Tania James is a graduate of Harvard and Columbia universities and the author of the novel Atlas of Unknowns, published to great acclaim in 2009. She has received fellowships from the Fulbright Foundation and the DC Commission on the Arts and Humanities. She was raised in Louisville, Kentucky, and now lives in Washington, D.C.

Nathan Englander, For the Relief of Unbearable Urges and What We Talk About When We Talk About Anne Frank; Michael Ondaatje, Running in the Family; Julie Otsuka, The Buddha in the Attic; Téa Obreht, The Tiger’s Wife
Learn More About Aerogrammes
print

Out of the Girls’ Room and Into the Night
Thisbe Nissen

The Tiger in the Grass
Harriet Doerr

Notes on a Shipwreck
Davide Enia

If I Knew You Were Going To Be This Beautiful, I Never Would Have Let You Go
Judy Chicurel

Calamity and Other Stories
Daphne Kalotay

The Making of Henry
Howard Jacobson