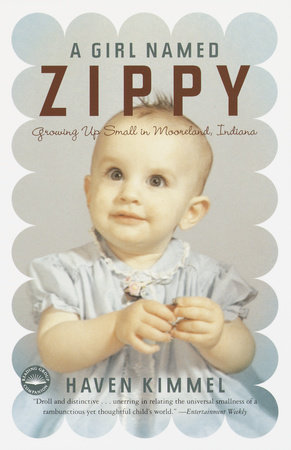 Whisking us to a simpler time and a much, much simpler place, A Girl Named Zippy provides a refreshing escape from twenty-first century woes. If your reading group has decided to treat itself to a Mooreland sojourn, you’ll discover that there’s plenty to say about the town’s most imaginative little girl (even if she did remain speechless until age three). We hope that the following questions will enhance your discussion, spotlight memorable passages, and make your reading experience even livelier. For information about other Broadway Books reading group guides, visit us at www.broadwaybooks.com.

When Haven Kimmel was born in 1965, Mooreland, Indiana, was a sleepy little hamlet of three hundred people. Nicknamed "Zippy" for the way she would bolt around the house, this small girl was possessed of big eyes and even bigger ears. In this witty and lovingly told memoir, Kimmel takes readers back to a time when small-town America was caught in the amber of the innocent postwar period–people helped their neighbors, went to church on Sunday, and kept barnyard animals in their backyards. Laced with fine storytelling, sharp wit, dead-on observations, and moments of sheer joy, Haven Kimmel’s straight-shooting portrait of her childhood gives us a heroine who is wonderfully sweet and sly as she navigates the quirky adult world that surrounds Zippy.

1. Zipp’s numerous pets include Sam the Pig, Speckles the Chicken, dogs Kai and Tiger, a pony named Tim, cats PeeDink and Smokey, and Skippy the Hamster. How does Haven Kimmel develop the animals as sympathetic characters or villains (such as Chanticleer, the abusive rooster)? How does a child’s bond with animals differ from that of an adult? Which of Zippy’s pet stories was the most memorable for you? Discuss the significant animals of your own childhood.

2. At first glance, A Girl Named Zippy appears to be a collection of assorted scenes, almost like a scrapbook. Yet the chapters unfold as if they were part of novel. What themes thread their way through the work as a whole? What recurring predicaments are resolved as Zippy gets older?

3. Haven Kimmel introduces us to a slew of eccentric Mooreland residents, from the grumpy drugstore owner to the postman who only delivers the mail he approves of. How do various communities–big cities and small towns alike–define eccentricity? Were Mooreland’s attempts at homogeneity and clean living successful? How does Mooreland compare to your town?

4. The introductory quote from Emerson asks, "Is there no event…which shall not, sooner or later, lose its adhesive, inert form?" Which portions of A Girl Named Zippy do you perceive as being precisely accurate, and which ones seem slightly embellished by the process Emerson calls "soaring from our body into the empyrean"?

5. Consider Zippy’s family: her gun-toting but sensitive dad, bookish mother, adored big brother, and mercurial big sister. In what ways is the Jarvis family dynamic both typical and unusual?

6. Does Haven Kimmel seem to approve or disapprove of her upbringing?

7. Zippy often discusses religion. How does her mother’s Quaker community differ from her father’s "church in the woods"? Is he really as godless as his wife thinks he is?

8. Numerous memoirs have been published that expose deeply painful childhoods. Haven Kimmel alludes to a few dark aspects of life in Mooreland, such as poverty, a lecherous teacher, and her father’s gambling problem. How do Zippy’s coping skills compare to those of other children you’ve read about?

9. The chapter entitled "The World of Ideas" introduces us to Zippy’s maternal grandmother, described as "a moneyed old woman in a small, depressed city." What insight does this section give us into Zippy’s mother, who was raised in an environment that was very different from Zippy’s?

10. How was Zippy changed by her friendship with Dana, whose parents worked in a factory, were atheists, and seemed uninterested in their child?

11. A few aspects of Zippy’s childhood would be hard to find in today’s households. Which of her recollections best represent the late 1960s and early 1970s?

12. Zippy had an unusual bond with Julie, her snaggletooth friend. How do you suppose Zippy was able to interpret Julie’s silence, even over the phone? Why did Julie hit Zippy three times in the chapter by the same name?

13. Petey was Zippy’s nemesis, abusing animals and even raising a carnivorous rabbit. Discuss the grade-school bullies in your past. What sort of adults did they become?

14. What is it about Haven Kimmel’s tone that makes even everyday events seem compelling? How does she balance humor and poignancy?

16. In light of the book’s beginning, what is the significance of the story in the final chapter, in which Zippy receives a piano from Santa? What do the closing sentences "thank you for not losing faith" and "thank you for being so brave tonight" reveal about Zippy and her parents?

People I Want to Punch in the Throat