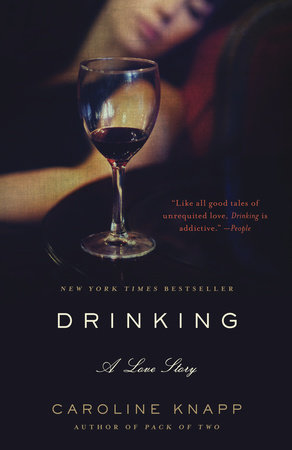 Soon after its release, Caroline Knapp’s Drinking: A Love Story became one of America’s most talked about bestsellers. In frank, arresting scenes, Knapp chronicles her personal battle with alcoholism, a dangerous seduction begun when she was just fourteen years old. As she pieces together memories such as her father’s fame in the field of psychiatry though he could not address his own household’s dysfunction, she creates a family portrait that speaks to anyone coping with a painful past, even those for whom addiction was not a factor. Tracing the patterns of secrecy and self-deception that seeped into every aspect of her life, including her volatile relationships with men, Knapp ultimately leads us through her extraordinary journey to sobriety. A memoir of healing and hope, this is a classic in its category–a true lifeline for millions of readers.

An important book for anyone carrying the burden of addiction or anyone struggling to reach out to a loved one who is in jeopardy, Knapp’s story delivers an unflinchingly honest, inspiring voice. The questions and discussion topics that follow are intended to enhance your reading of Caroline Knapp’s Drinking: A Love Story. We hope they will enrich your experience of this provocative memoir.

1. Discuss the book’s title. In what way is it a love story? What parallels exist between Caroline Knapp’s "affair" with alcohol and the way she experienced love throughout her life with family and friends as well as in romantic relationships?

2. Chapter Four, "Hunger,"and Chapter Eight, "Addiction," feature questions that capture an alcoholic’s habits and mind-set. How would you respond to these questions? Is there anyone in your family or circle of friends who might be surprised by their responses, or surprised by yours?

3. Knapp mentions many literary figures whose alcoholism is well documented. Do you believe that addiction is more acceptable in creative fields? How do stereotypes of addiction measure up to the real-life profiles provided in Knapp’s memoir?

4. What did you discover in Drinking: A Love Story about the similarities among alcoholism and other addictive behaviors, such as bulimia or kleptomania? What challenges are unique to alcoholics? How did your perception of the causes and treatments for addiction change as you read Knapp’s story?

5. Knapp writes eloquently of the fears she faced as a child, from her father’s clinical, omnipotent persona to her mother’s aversion to outward affection. To what extent do you attribute Knapp’s alcoholism to genetics, childhood despair, or temperament? How do you account for the differences between Knapp and her twin sister? How were they affected by the knowledge of their father’s first wife and the half siblings from that marriage?

6. If Dr. Knapp had come to you for counseling, what recommendations would you have given him? Why might someone with his knowledge of (and access to) first-rate psychotherapy nonetheless have been unable to change his own pattern of infidelity as well as his detachment from his loved ones? What damaging cycles were set in motion by his parents and by the family of Caroline’s mother?

7. Knapp recalls the times her mother and sister expressed concern about her drinking. How would you have responded had you been in their position? What are the responsibilities and limitations of an alcoholic’s relatives, friends, colleagues, lovers?

8. What does Knapp tell us about the way she and many other addicts viewed intimacy, sexual and otherwise? Why was it difficult for her to recognize and receive love? What needs did her double life fulfill?

9. Discuss the theme of shame that surfaces throughout the book. Why did Knapp, and those she encountered on the road to recovery, feel comfortable in roles that made them feel ashamed and unworthy? Why was she drawn to Julian’s perfectionism?

10. In Chapter Sixteen, "Healing," Knapp writes: "At times I’ve grumbled to friends about longing for a return to Prohibition." Is alcohol too widely available in the United States? What is your opinion of debates over whether to legalize various non prescription drugs? Should distinctions be made between addicts who consume dangerous levels of legal substances (including prescription medications) and those who use illegal ones? To what extent should addiction be criminalized?

11. The book’s closing chapters include poignant images of her parents’ final days. Do you believe that their death was the catalyst for Knapp to seek help? Was it trauma, fear, liberation, or something else altogether that led her to seek (and accept) help? What did it take for her to reach her "yet"? Why was she so averse to Alcoholics Anonymous when she attended a meeting earlier in her life?

12. What does Knapp capture while describing the Ritualistic Snipping of the Black Lycra Dress in the final paragraphs of the book? What souvenirs from your past would you like to bid farewell to? What objects or emotions could you replace them with?

13. Discuss the approach of Drinking: A Love Story in comparison to other books in its genre. How does Knapp’s storytelling approach differ from that of other memoirists? How does her experience compare to that of other authors who have written about addiction and recovery, such as Susan Cheever or James Frey? In what ways has our approach to addiction shifted in the past decade or in comparison to previous generations?

14. Are there any harmful cycles of behavior in your family? What would it take to keep them from being perpetuated in the lives of your descendants? What irrational legacies are the most difficult ones to end?

15. Caroline Knapp’s life ended six years after Drinking: A Love Story was published. How does the brevity of her life affect your impression of this memoir? Reminded that longevity is never guaranteed, how should we approach our most daunting challenges?

The Virtues of Aging

They Cage the Animals at Night

The Beauty of Living Twice
Back to Top