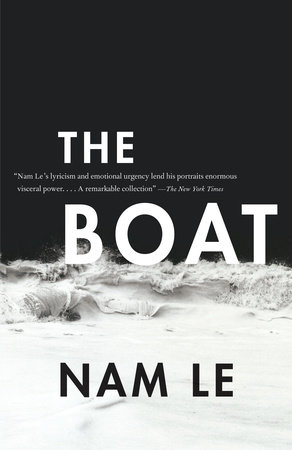 The introduction, questions, and suggestions for further reading that follow are intended to enhance your group’s conversation about The Boat, a stunning debut collection of stories from the acclaimed young writer Nam Le.

In stories scattered around the globe, Nam Le takes us from the slums of Colombia to the streets of Tehran; from New York City to Iowa City; from a tiny fishing village in Australia to a foundering vessel in the South China Sea, in a masterly display of literary virtuosity and feeling. Brilliant, daring, and demonstrating a jaw-dropping versatility of voice and point of view, The Boat is an extraordinary work of fiction that takes us to the heart of what it means to be human.

1. “Love and Honor and Pity and Pride and Compassion and Sacrifice”
When his father arrives, the narrator is dreaming about a poem he is writing. His father “had a habit of speaking in Vietnamese proverbs” [p. 3]. Why is the juxtaposition of the father’s use of proverbs and the son’s efforts to create new words significant in the story? How would you describe the relationship between the father and son?

2. A friend at the Iowa Writers’ Workshop tells the narrator (whose name is Nam) to exploit his “background and life experience” and write a story about Vietnam [p. 9]. What happens when Nam decides to do so? Why does his father burn the manuscript at the end of the story?

3. “Cartagena”
After his friends seek out and attack “the target” at the opening of the story, Ron realizes that “this business was personal” [p. 36]. He later learns why his friends were taking their revenge on this man. Discuss the plotting of the story, and why its careful unfolding of surprises is effective.

4. Ron is summoned to the home of his agent, El Padre. Why is El Padre’s history relevant to the tale? What does it suggest about how he will treat Ron for refusing to kill Hernando? What is Ron planning to do with the grenade?

5. What details—of setting, speech, or character—contribute to the impact of the story?

6. “Meeting Elise”
As a painter, Henry has a weakness for beauty. His estranged daughter, he realizes, has “a severe beauty all the way through her. . . . She has everything she needs. She has wrung all of my weaknesses out of her strong, straight body” [p. 93]. What is the effect of the story’s juxtaposition of the daughter’s beauty and the father’s ravaged physical condition?

7. What does Henry hope to gain by seeing his daughter, and why does Elise refuse to see her father, finally? What is the connection, for Henry, between his lover Olivia (who died young) and Elise [p. 89, 93]? How do you interpret the final two paragraphs of the story?

8. “Halflead Bay”
“Halflead Bay” is the longest story in the collection. As such, it is able to convey quite a broad array of information, including the way of life of a family in a coastal town, the subjectivity of a teenage boy, the confusion of sexual attraction, the power dynamics among teenagers. Given the story’s richness, what seems to be its central focus in terms of its plot?

9. What is significant about the scene in which he hooks a seagull while fishing, and his mother has to kill the bird for him [p. 135-37]? How does this scene relate to the fight with Dory, when his father and brother come to help him out [p. 158-62]? Why is the family juxtaposed to the drama involving Alison and Dory?

10. What is left unresolved or is unclear in this story?

11. “Hiroshima”
During a war game played by the evacuated children staying at the temple, Mayako imagines herself as a soldier who has died in the service of the Emperor: “I lie dead on the ground, looking into the deep blue sky, overwhelmed with a glorious feeling of happiness” [p. 167]. How does this moment work with the scene we can presume will exist just after the final sentence?

12. How much time passes in the story? How is time slowed down as the bomb makes its way to Mayako? How do her memories work to enlarge the picture of her life, which is about to be lost? How effective is Nam Le’s choice to have the story’s final moment recall the flash of a photograph taken by Mayako’s father earlier [p. 166, 177]?

13. “Tehran Calling”
Sarah feels that Paul was “the aberration of her life: the relief from her lifelong suspicion that she was, at heart, a hollow person, who clung to hollow things” [p. 182]. Is there evidence for this in the story? Why do she and Paul split up?

14. What does the story seem to say about the nature of the friendship between Sarah and Parvin? What brought the two women together? How do you interpret the ending of the story, and the paragraph beginning with the words, “You could never know” [p. 229]?

15. “The Boat”
Why have Mai’s parents sent her away from home [p. 245]? What do you understand about the political situation, and about what Mai’s father has experienced?

16. What is the nature of the bond that develops between Mai and the little boy, Truong? How is it connected to the story of Mai and her father, which is told in flashbacks [p. 254]?

17. General questions on The Boat
Given that Nam Le says that he has never been to many of the places depicted in these stories, discuss the imaginative work involved in creating this particular array of settings and characters. What does Nam Le do to create a convincing sense of the subjectivity of his characters?

18. What is notable about Nam Le’s prose style in these stories? It is apparent that his writing vocation began with the desire to be a poet? What kinds of details are striking, what word choices are unusual, what senses does he appeal to?

19. Nam Le has said of The Boat, “I find it hard to figure out whether this book as a whole is an exercise in hope or in despair. I think all of us are more alone than we would like to think of ourselves as being” (Interview The New York Times, May 14, 2008). Discuss the effect of the collection as a whole; what conclusions do you reach about the vision of life in these stories?

Nam Le was born in Vietnam and raised in Australia. He is the fiction editor of the Harvard Review. He splits his time between Australia and abroad.

A Box of Matches