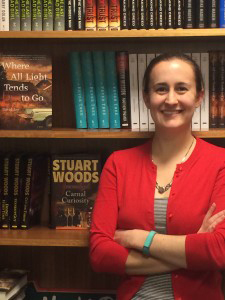 Editors get very passionate about books they work on – the Editor’s Desk series is his or her place to write in-depth about what makes a certain title special. Get the real inside-scoop on how books are shaped by the people who know them best. Putnam Editor Sara Minnich answers “Three Questions for an Editor” about her work on David Joy’s Where All Light Tends to Go.  This highly praised debut novel is a savage and beautiful story of a young man seeking redemption. In the meth-dealing family at the center of the book, killing a man is considered a rite of passage, but when eighteen-year-old Jacob McNeely botches a murder, he is torn between appeasing his kingpin father and leaving the mountains with the girl he loves. The world that Jacob inhabits is bleak and unrelenting in its violence and disregard for human life, and having known nothing more, he wonders if he can muster the strength to rise above it. For a debut novelist, David Joy has a writing style that feels so natural and remarkably assured as he creates an off-the-grid world populated by authentic characters that are bound to cause readers to feel a wide range of emotions.  What were your thoughts and impressions as you read the initial manuscript for the first time? I was hooked within the first few pages of Where All Light Tends to Go. Both the writing style and the voice of the young protagonist were raw and gritty, utterly real.  After promising opening pages, I was crossing my fingers in hope that the rest of the book would hold up – and it absolutely did.  Shortly into the story things take a shocking and violent turn, and the pace only escalates from there.  Mostly I remember being unable to put it down.  The manuscript needed some work, but I knew from the first read that I loved it and that David was the real deal. How would you describe the scope of the editor/author process as Where All Light Tends to Go evolved into a finished book? The first draft that I read was in fairly solid shape in terms of the plot, pacing, and writing.  The element David and I spent the most time revising over the course of three drafts was the relationship between the hero, Jacob McNeely, and his love interest Maggie.  Maggie’s character needed to be fleshed out, and David did a lot of work to find her voice and to help the reader understand the magnetism between her and Jacob.  Their relationship was fundamentally transformed from the first draft to the final book, in a way that brought a lot of heart and hope to a story that is ultimately quite dark. This novel is not your traditional “book club” book, given the gritty nature of a lot of the stories that unfold in its pages, but it feels like a book that will spark a lot of discussions.  What kinds of readers do you think will be most attracted to Where All Light Tends to Go and why? The novel falls firmly in the category of country noir, so would be perfect for readers of Daniel Woodrell and Larry Brown.  Fans of shows like “Breaking Bad” or “Justified” would also find much to enjoy – a strong sense of place, characters that leap off the page, a grim and intense story, and a relentless pace.

Read more about Where All Light Tends to Go by David Joy here.