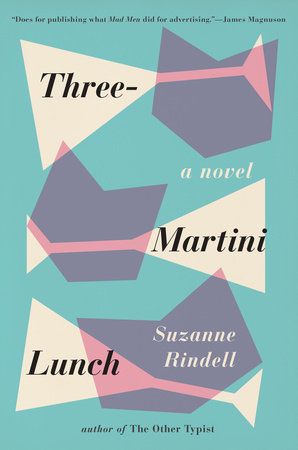 Editors get very passionate about books they work on – the Editor’s Desk series is his or her place to write in-depth about what makes a certain title special. Get the real inside-scoop on how books are shaped by the people who know them best. The best present an author can give an editor is the gift of surprise. Editors spend their days reading a lot of manuscripts that don’t tell them anything new. So reading a story about a world you thought you understood framed in an unexpected way that prompts you to think differently about it, that’s hitting the publishing jackpot. Which is what I did when Three-Martini Lunch came across my desk. In this terrific novel, Suzanne Rindell delves into a world I knew something about – book publishing – but sets her story in the late 1950s, which was when big changes were about to take place. I thought I had a decent grasp of the era. I’m familiar with two other iconic New York stories from around that time: Rona Jaffe’s classic novel (and eventual movie) The Best of Everything and the television show Mad Men. In both of those, New York City is portrayed as one of the places to be in the mid-20th century. If you know anything about either The Best of Everything or Mad Men – or even Alfred Hitchcock’s 1959 movie North by Northwest – you see a New York that’s sleeker, cleaner, less crowded than it is today. And the roles of men and women were as clearly defined then as their ambitions: Success for men meant career and advancement; success for women marriage and family. In Three-Martini Lunch, Suzanne Rindell peers beyond that mid-century mindset and explores the lives and worlds of Miles, Cliff and Eden, three young people struggling to gain a toehold in New York and hoping that publishing is the way to do that. The lives they lead are a far cry from the expense-account lunches and pristine suburban enclaves of the publishing elite. These young people are drawn to Greenwich Village and its emerging beatnik culture, with its dark and smoke-filled bars, jazz clubs, and poetry readings. And they struggle to stretch their meager bank balances by living in cramped, ramshackle apartments and having just enough money for food and beer but not always both. Suzanne gives her characters fascinating opportunities to pursue their individual ambitions and indulge their temptations. Even more compelling, she shows readers how the choices they make to achieve their goals changes them. I’m not giving anything away when I say that what you think of Miles, Cliff, and Eden at the beginning of Three-Martini Lunch will not be what you think of them at the end. As I followed the characters’ journeys through successive drafts of the novel, I found myself reassessing my own ideas about what was possible in publishing, in New York, and in America during that time. It was an era on the cusp of upheaval and turmoil, and it’s that change that Suzanne Rindell explores so effectively – and so surprisingly – in Three-Martini Lunch. Which is one of the highest compliments I can pay. Learn more about Three-Martini Lunch below!
Back to Top