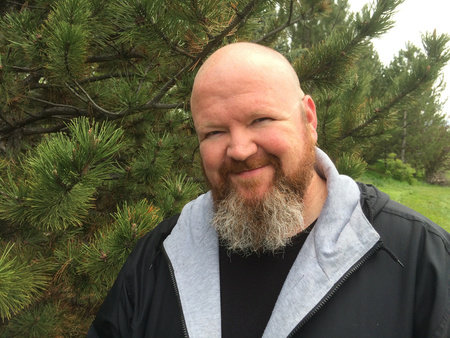 Kevin Hearne hugs trees, pets doggies, and rocks out to heavy metal. He also thinks tacos are a pretty nifty idea. He is the New York Times bestselling author of The Iron Druid Chronicles, the Ink & Sigil series, and the Seven Kennings series, and is co-author of The Tales of Pell with Delilah S. Dawson.

The Tales of Pell

Kill the Farmboy is a hilarious new fantasy novel from co-writers Delilah S. Dawson and Kevin Hearne. In part one of a two part interview, Hearne tells us about working with Dawson, and catches us all up on a few other projects. In part two, Dawson lets us in on the delicious(?) origins of the novel. Read it here!

PENGUIN RANDOM HOUSE: You’ve got a lot of projects you’re working on right now. Your biggest series to date, the Iron Druid Chronicles, has officially come to an end, I know. What else are you working on?

PRH: You have a new book right now: Kill the Farmboy.

KH: Yes, that was written with Delilah S. Dawson, and it was so much fun to write. So far, everyone has been telling me that they’ve had a blast reading it, which was, of course, the intention. It’s a very humorous fantasy that takes a look at the “chosen one” narrative. We have a sequel, No Country for Old Gnomes, coming out next year. We also have a third book that we’re finishing up right now called The Princess Beard.

PRH: There’s always been an undercurrent of humor in your work. Did you grow up reading any kind of funny fantasy authors, or something like that? What got you moving in this direction?

KH: Mostly, Douglas Adams. He was fantastic to read. Of course, I love Monty Python. Those are the two main influences, I would say. I didn’t even get to read Pratchett until I was well out of college, unfortunately: No one had told me about him! Of course, I loved him once I got into his work.

PRH: Is a bit of humor important to you when it comes to dealing with your own everyday problems?

KH: Yeah, it keeps you sane. You look for things to laugh at, you’ll find them. It is a lot more pleasant to spend the day that way than scowling at everything?

PRH: What was it like cowriting with Delilah S. Dawson?

I love it. Delilah always surprises me. I get a chapter from her, and I know that I’m going to giggle my head off. She’s so good with puns and inventive turns of phrase. I always enjoy seeing the new stuff, and then I can’t believe that I get to work with her. I edit a little bit, throw in some of my own jokes to add on to what she’s got. Then I write my own chapter, send it to her, and she does the same thing with my work. We’re building a hybrid voice together. By the time we’ve edited each other a whole bunch, it becomes a new Voltron of prose, right? Turns of phrases — puns — used to be appreciated as a high form of humor. Now people like to groan at them, but they make me giggle. We’ve got quite a few of them buried in Kill the Farmboy in the names we use. The map is full of them. If anyone would like to check out the map, you can find it at the website.

KH: After the tour for Kill the Farmboy, I’m going to get to write the sequel to Plague of Giants. It’s called A Blight of Black Wings. I’m looking forward to getting back into the world of The Seven Kennings.

PRH: Giants are pretty scary, but we don’t usually think about it. They’re fairy tale creatures, but things like Attack on Titan and your own work have revived them as genuinely frightening creatures.

KH: Yeah, they can be incredibly imposing. Anytime I’m around someone who is taller than me, which is most of the time, I always think about what an incredible reach they have and how I would never even stand a chance against them: the incredible advantage they would have in any kind of combat … or in reaching things on tall shelves. Giants are good metaphors for things we all find impossible to deal with sometimes, whether it be a governmental system that is cruel, uncaring, and merciless, or a disease. I mean, you can make giants into metaphors for almost anything that is tough to handle.