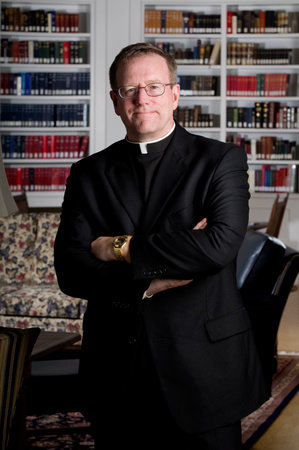 Father Robert Barron is the founder of Word on Fire Catholic Ministries, the Rector of Mundelein Seminary, and the host of CATHOLICISM, a groundbreaking, award-winning documentary about the Catholic faith. He received a master’s degree in philosophy from the Catholic University of America (1982) and a doctorate in sacred theology from the Institut Catholique de Paris (1992). He has published numerous books, essays, and articles on theology and the spiritual life. He has also appeared on several media outlets including NBC, PBS, FOX News, CNN, and EWTN. His website, WordOnFire.org, has reached over 3.8 million people and his weekly YouTube videos have been viewed over nine million times. His pioneering work in evangelizing through the new media led Cardinal Francis George, Archbishop of Chicago, to describe him as “one of the Church’s best messengers.”

Your Life Is Worth Living

The Case for Jesus

The Joy of the Gospel (Specially Priced Hardcover Edition)