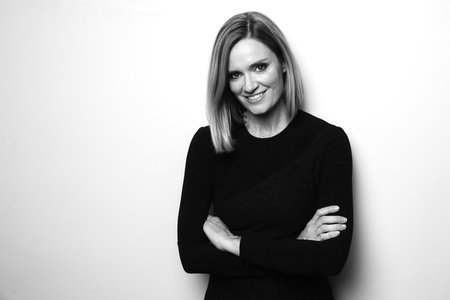 Julia Baird is a journalist, broadcaster, and author based in Sydney, Australia. She is a columnist for the International New York Times and host of The Drum on ABC TV (Australia). Her writing has appeared in Newsweek, The New York Times, The Philadelphia Inquirer, The Guardian, The Washington Post, The Sydney Morning Herald, The Monthly,and Harper’s Bazaar. She has a Ph.D. in history from the University of Sydney. In 2005, Baird was a fellow at the Joan Shorenstein Center on Media, Politics and Public Policy at Harvard University.

“On June 20, 1837, the destiny of a nation wheeled, spun, and came to rest on the small frame of an eighteen-year-old girl. A girl who read Charles Dickens, worried about the welfare of Gypsies, adored animals, loved to sing opera, was fascinated with lion tamers, and hated insects and turtle soup; a girl who was bullied by those closest to her until her determination was set like concrete; a girl whose heat was wound tight with cords of sentiment and stoicism.”

With these words, Julia Baird introduces us to one of the most famous women in history, but one we know little about, other than the fact that her name defined an era: Queen Victoria.

Victoria the Queen took Baird, an Australian journalist, more than half a decade to complete, and was written during years when the destiny of America wheeled, spun, and, to many, looked fated to rest upon the frame of another powerful, controversial woman. In the aftermath of the presidential election, Baird’s book gives a timely, fascinating, and much-needed historical perspective on the role of women in affairs of state, and our continuing ambivalence about female ambition and power.

She spoke to Penguin Random House about the process of researching and writing her book, and what has and hasn’t changed for women in politics in the years since Victoria’s reign.

PENGUIN RANDOM HOUSE: The obvious one: this book took more than six years to write, and, right up until its publication, most of us assumed it would be arriving in a post-Hillary world. How did your ideas about Victoria and her role in history change as modern history changed over the course of your writing? Did the outcome of the election change your feelings about her and/or the place of your book in the world right now?

JULIA BAIRD: Great question. My ideas about the importance of telling the stories of women – those prominent, those invisible and those rendered unrecognizable through myth-making – have remain unchanged, although I think witnessing the vitriol expressed towards the first serious female presidential candidate in the US has only cemented this view. We continue to see women’s reaching for power, or exercising authority as somehow odd, unnatural or anomalous, whereas history tells us it is not, and never has been. We have long struggled to reconcile women and power in western political thought; this is something we need to expose and redress.

PRH: You had difficulty getting access to the Royal Archives, and they wanted you to leave out the parts of the book that detail Victoria’s romantic relationship with her servant, John Brown, which you refused to do. How did you negotiate your relationship with Buckingham Palace during the years you were writing the book? Have you heard any official reaction to the book?

JB: No I have not heard any official reactions to the book. I applied several times to get into the Royal Archives – telling them I had a PhD in history and would approach all material with a commitment to good scholarship, but was rebuffed. It was not until the Governor General of Australia – the queen’s representative in our country – pressed my case that I was allowed in. I was delighted with the opportunity, though I had spent a lot of time gnashing my teeth – I think there is a strong case to be made for better, more open access to important historical documents in the Royal Archives.

PRH: Queen Victoria was criticized for being subservient to her husband, Prince Albert, and, after he died, being too consumed with grief to properly rule – characterizations which you refute. Hillary Clinton, on the other hand, has been criticized for being too ambitious, and the validity of her marriage has been called into question. Writing this book against the backdrop of Clinton’s failed first bid for the presidential nomination, do you feel much has actually changed about the public’s willingness to accept a woman in a role of power?

JB: Not in a role of high power – we accept women in politics and public life now, but the experience of women leaders has shown we still judge them far more harshly, punish them more severely and take into account a far broader range of criteria for the ‘likeability’ of women than we do men. I remain astonished at how much Hillary Clinton has been attacked for staying with a husband who cheated on her; I am sure she would have been criticized if she were a single mother too. Meanwhile the President-elect has been married three times and boasted about infidelity. It’s a perverse, destructive kind of double standard.

PRH: In describing an episode where Queen Victoria wrongly accused her mother’s lady-in-waiting Flora Hastings of having an affair and being pregnant, you call the queen an early ‘slut-shamer:’ “For the first time in her life she had been part of a clique, and it was a powerful one; and the pull of scandal, revenge, and bitchy gossip had been too great. Especially when it came to the sexuality of another woman, one she saw as an enemy.” In several instances you write about women being undermined by other women, such as Victoria’s mother attempting to stifle her daughter, female contemporaries criticizing her, and her own daughter censoring her diaries. Were you surprised to find ‘mean girls’ going back this far, and can we learn anything from Victoria’s example?

JB: I was shocked by the Lady Flora Hastings episode – much of the evidence about the incident had been destroyed and I think it really demonstrates both Victoria’s immaturity and lack of sophistication as a young queen and how gossip worked in the royal court. Victoria was surrounded by men, but was also close to women, especially her governess – I was interested in how Victoria made being a widow a spectacular kind of grieving, and how she pulled around her a group of widows she called “the sad sisterhood” – not quite a sorority party, but women bound together in trying to make sense of life as single women in an age when women had few rights. So her relationship with women was complicated!

PRH: In addition to describing Victoria’s reign, you paint an often bleak picture of the situation of women in general during her era, especially poor mothers, who were scapegoated for a host of social problems. The Queen herself had many children, but seemed more concerned with other issues than the well-being of mothers like herself. Do you think there continues to be a disconnect between upper and working class women, and if so, why?

JB: Yes. And that was in part obvious in the past election too. In short, because the women’s movement has been dominated by white middle class women historically, and has had to go through several periods of reckoning to be reminded that core to its goals is the liberating of all women, and that class and race place additional burdens and intersectionality is crucial. Because, more recently, feminism is continually co-opted by a glossy consumerism and commercialism and too often perceived as a narrow Christmas list, not a profound cultural rethinking, and a radical, broad ranging quest for equality.

PRH: Your book comes out following the release of the highly lauded Netflix series The Crown, which describes the reign of Queen Elizabeth. Can you compare the difference in public attitudes towards women who seek political office and those who inherit roles of power, and speculate as to why a queen might continue to appeal and fascinate Americans, yet we seem unable to elect a woman president?

JB: This is an excellent question. We are gentler towards women who inherit power; they perform a powerful symbolic role, and we think of them fondly, if often paternalistically. They are like celebrities who have a touch of the ordinary – both remote and yet also felled by the same griefs, passions, longings, foolishness as the rest of us. When a woman reaches for power, we are far tougher on her than when she actually possesses it. A queen, in other words, is considered to be devoid of ambition – though a close study of Victoria shows this to be a false assumption.

I think America is ready for a female president, though some of the visceral dislike expressed towards Hillary Clinton was excessive and irrational. The question asked of her was not: how would she manage the economy, but “do we like her?” “Is she nice?” “Is she the right kind of woman?” She was an enormous Rorschach test for the American psyche when it came to the role and responsibilities of women, and you cannot deny the whole campaign peeled back some of the layers of civility to reveal some raw sexism. A president is assessed daily, and placed on the scales every four years. A queen is expected to endure. Victoria did and Elizabeth II has too.