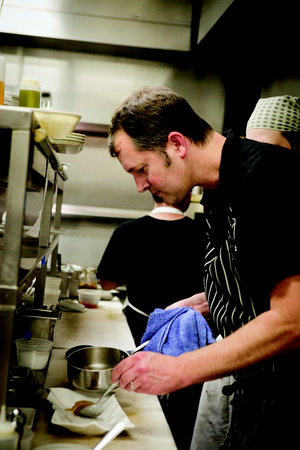 Chef-owner Paul Virant’s name is synonymous with local, seasonal eating, a distinction that has brought him accolades from national and regional publications. In 2005, before his restaurant, Vie, had been open for a full year, Chicago Magazine named Virant the city’s Best New Chef. Soon after, Vie was featured in Food & Wine, the Chicago Tribune, the Sun-Times, and Time Out Chicago. In 2007, Food & Wine named Virant among its Best New Chefs, in 2010 Vie picked up a Michelin star, and in 2011 Virant was nominated for a James Beard award. In addition to awards, Virant has appeared on NBC’s Today and, with chef de cuisine, Nathan Sears, competed in a close match on Iron Chef America. In addition to running Vie, Virant became chef and partner at Perennial Virant in Chicago in 2011.