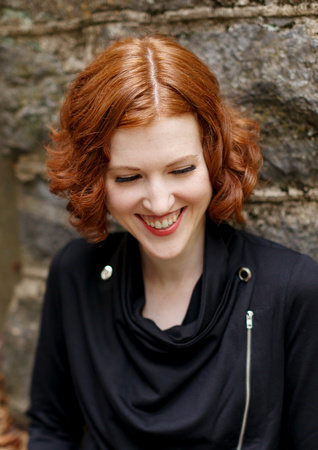 Stephanie Perkins is the New York Times bestselling author and anthology editor of multiple books for young adults, including Anna and the French Kiss, Lola and the Boy Next Door, and Isla and the Happily Ever After. She has always worked with books—first as a bookseller, then as a librarian, and now as a novelist. Stephanie lives in the mountains of North Carolina with her husband. Every room of their house is painted a different color of the rainbow.

The Woods Are Always Watching

There’s Someone Inside Your House

Isla and the Happily Ever After

Lola and the Boy Next Door

Anna and the French Kiss

My True Love Gave to Me

You might know Stephanie Perkins best as the author of several romance novels for young adults, but she has a darker side. We recently sat down with Perkins to discuss her secret love of horror movies and her new book There Someone Inside Your House.

Editor’s note: Deadline recently announced that producer 21 Laps (“Stranger Things”) and James Wan (“Insidious,” “The Conjuring,” and more) are coming together to create a Netflix movie adaptation of There’s Someone Inside Your House.

Stephanie Perkins: I’m mainly known for my romance novels for teens, Anna and the French Kiss being the one most people know me for. My titles say exactly what they are — Anna and the French Kiss, Lola and the Boy Next Door, Isla and the Happily Ever After — so people have always known me to be this sweet, cheerful person, but I also have a very dark side. I think most people are more than one thing, and after a few years of only being known for this one thing, the other side started rearing its head. I’ve always been a huge horror fan, and it was just time for it to come out. After writing all of these really sweet stories for a few years, it was just time to kill some teenagers! (laughs)

PRH: The book’s title sounds like it could be a slasher film. Is that a coincidence?

SP: Oh, not at all. I love the title. It was really fun. My favorite kinds of horror titles are the ones that are very on the nose: “I Know What You Did Last Summer”, “All the Boys Love Mandy Lane” — that was a great title from a few years ago. I knew I wanted something like that. Normally, I think titles are really tricky and hard, but this one came pretty quickly.

PRH: What’s it all about?

SP: As you had guessed by the title, it is very much influenced by all of those teen slasher films that I grew up watching, like “Scream” and “I Know What You Did Last Summer”. It’s a very traditional slasher story: a killer with a knife chasing after teens. It was the kind of book that I’ve been wanting to read for a while. It is easy to find in movie form, and not so easy to find in book form. I had been complaining about that to an author friend of mine, and she suggested that I write it. It has all of my favorite tropes in it. It takes place around Halloween, and there are corn stalks … it was such a huge leap.

PRH: It must be difficult to write something that is genre-savvy like that without it turning into cliche.

SP: There were definitely challenges in writing this book, and a lot of those had more to do with craft. My other books, being romances, are more about character growth: It’s a slower, more traditional story arc. This one, being a slasher novel, was all about plotting. It was tricky in that way, as well as learning to write in a different style, and from a different perspective of plotting before character and then filling in the character around the plot. In terms of the genre itself, I feel like I’ve been preparing for this my whole life. I know this genre in and out. I put in there what I would want as a reader and excluded the things that make me cringe. That part felt very natural.