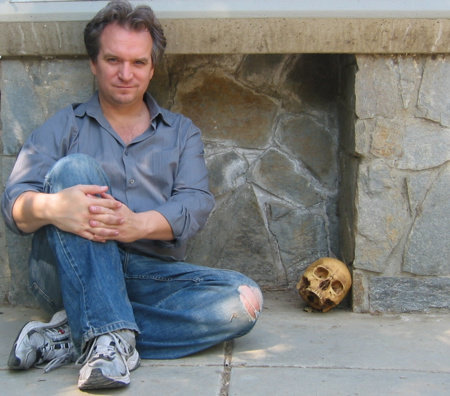 PETER CLINES has published several pieces of short fiction and countless articles on the film and television industries. He is the author of The Fold and the acclaimed Ex-Heroes series. He lives in Southern California.

Author Peter Clines on the scariest book he ever read | authorcuts

Peter Clines is the author of many great books, among them the superheroes versus zombies series Ex-Heroes. Now, with the undead safely behind him, he’s on to new and exciting territory in Paradox Bound. We had a chance to talk about the book with Clines at SDCC 2017.

PENGUIN RANDOM HOUSE: You’ve wrote several books about superheroes and zombies. Now you’re on to something new. Why the change?

Peter Clines: I’ve never wanted to be just “the zombie guy,” you know? I see a lot of writers who — and I have nothing against them, they have great careers — but this is what they do. I’ve always wanted to tell other stories, and I have had success telling them, like with 14, The Fold, and stuff like that. I pitched the idea for the new book, Paradox Bound, to my editor at Comic Con 2013. I remember we were sitting down for drinks at the Hyatt, and he asked me what we were going to do next. I said that I had an idea that was kind of like Neil Gaiman’s Neverwhere meets “Cannonball Run”. He sat there for a moment, laughed, and then asked me to tell him more.

PRH: Well, now I want to know more. How are these things connected?

PC: About five or six years ago I reread Neverwhere by Neil Gaiman, and it struck me as really odd that no one had ever done an American version of it. It’s such a uniquely British book, with London Below and all of that sort of stuff. I grew up in New England, so I first started thinking about how you would do something like this in Boston. It didn’t work compared to London, a city that has been there for millennia. I played around with other cities, and I started to think that maybe this was an idea that wouldn’t work for America and that’s why no one has ever done it. It hit me that this was the whole catch. The British story of being an island is sort of about just being there, but the American story is the road trip. It is about expansion and spreading out over the continent. As soon as I hit that, I started coming up with all of these ideas about people in tons of old random classic cars — everything from old Model A’s and Mustangs, to one or two futuristic cars, to steam trains — crossing back and forth across America searching for things.

PRH: Tell me about some of your main characters.

PC: There are two main characters. One of them is Eli, who is eight years-old when he is introduced. That is when he first meets our other character, Harry, which is actually short for Harriet. Because he is so little, and the way that Harry dresses, he actually mistakes her for a teenage boy. The next time he meets her he is 13, but Harry is still the same age, and he realizes that she is a girl. Finally, he meets her again in his late twenties. They’ve finally caught up and they’re on the same level. They’re talking, and she explains that she’s searching for something but can’t tell him what it is. He asks her if she’d like to take a break. She explains that there are other people searching for it and they won’t take a break just because she does. Eli finds out that Harry is also being chased by what appears to be a government agent with no face. He has smooth skin and wears a transparent Halloween mask. This agent shows up at Eli’s job because he knows he has talked to her. Based on clues he’s gathered, Eli goes to track Harry down and gets caught up in this whole race.

PRH: Have you ever taken a big road trip like that?

PC: I actually did when I was a lot younger. I had gotten out of college to find that my degree was useless. I had an awful job I hated selling men’s suits at a mall. At one point, I was in the food court with another old college friend. I was complaining about my job and how much I hated everything. She told me that she was moving to California in two weeks and invited me to come. I sat there for a moment, and then told her yes. I went back to my job and gave my two weeks notice, and went home and called my parents to tell them. Two weeks later, we took off without a map or anything, just a general knowledge of the route to get to southern California.

PRH: There’s this idea with road novels that they are about discovering yourself and resolving a problem within — the whole “geographical cure” thing. Does this get any play in your novel?

PC: It is part of it. One of the things with Eli is that he lives in a little town that never really developed, It is one of those places that you run into that is 30 years out of date. He won’t leave because it is home, but now he is finally motivated to leave and go out and see the rest of the country and discover what other people are like. There’s the added bonus that he also gets to see what people in New Orleans were like in 1850, or California in 1885!

PRH: Is this book a standalone story or the start of a new series?

PC: I think it is going to be a standalone novel. Anyone who is a fan of my books will probably notice hints and nods to my other stuff because I do stuff like that, but I this will probably be the end of this world unless there’s another storyline that strikes me.