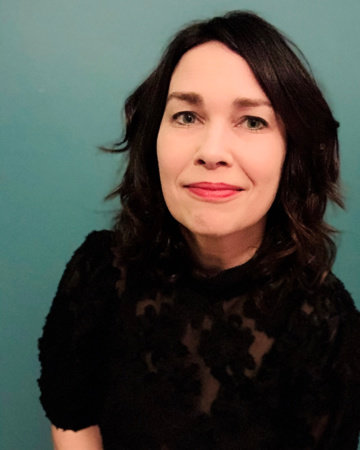 AISLINN HUNTER is an award-winning novelist and poet and the author of seven highly acclaimed books including the novel The World Before Us, which was a New York Times Editor’s Choice, a Guardian and NPR “Book of the Year,” and winner of the Ethel Wilson Fiction Prize. Her work has been adapted into music, dance, art, and film forms—including a feature film based on her novel Stay, which premiered at the Toronto International Film Festival. Hunter holds degrees in Creative Writing, Art History, Writing and Cultural Politics, and English Literature. In 2018 she served as a Canadian War Artist working with Canadian and NATO forces. She teaches creative writing and lives in Vancouver, BC.

The World Before Us

In 2013 director Wiebke von Carolsfeld released a film starring Taylor Schilling (of “Orange Is the New Black” fame) and Aidan Quinn (of, well, Aidan Quinn fame). The film had a quiet release, which suits its own quiet beauty. The story follows the relationship of Dermot and Abby, two people who are imperfectly in love. He’s a little older than her, set in his ways; she is still finding herself and where she fits into the context of her world. The film is gorgeous and worth watching. The author of the book on which “Stay” is based is accomplished writer Aislinn Hunter. Aislinn Hunter’s writing has garnered numerous accolades and awards. Her acclaimed collection of stories, What’s Left Us, was a finalist for the Danuta Gleed Award and the ReLit Prize. Her poetry, Into the Early Hours, was shortlisted for the Dorothy Livesay Prize and won the Gerald Lampert Award. Her second collection of poetry, The Possible Past, was shortlisted for the Dorothy Livesay Poetry Prize and the Pat Lowther Award. Her novel adapted novel, Stay, was a Globe and Mail “Top 100” book and a finalist for the Amazon.ca First Novel Award. Her latest work, The World Before Us, is her first book of fiction in twelve years. After travelling to London and Edinburgh over the past few years to study for a PhD, Hunter now lives and teaches in Vancouver, British Columbia. We caught up with Aislinn to talk about the adaptation process, switching gears for her new novel, and more.

PENGUIN RANDOM HOUSE: In 2013, the movie adaptation of your 2002 novel, Stay, was brought to the big screen. What about that adaptation process was most surprising to you?

AISLINN HUNTER: When I signed the film rights contract back in 2002, I signed away any interest in working on the screenplay, so Stay was put in Wiebke von Carolsfeld’s hands. She’d done really well with her first film, “Marion Bridge,” so I was thrilled that she would be writing and directing “Stay.” I got my first look at the screenplay a month or two before filming began. I was surprised that the main plot had been externalized with a pregnancy (which doesn’t exist in the book) but I knew it was a smart move: I mean, how do you film the psychological haunting that Stay focused on? (You don’t.) What was most surprising though – about reading the screenplay and seeing the actual film for the first time, at the Toronto International Film Festival – was that whole snippets of dialogue that I’d written were being used in the movie. Actual human bodies would be saying words I’d written. It still seems fantastical to me: that something I dreamed up while sitting at a desk in my cramped study eventually came out of Aidan Quinn’s mouth and that it was as if my character Dermot had been brought to life and was saying it.

PRH: What was it like to go back to a novel you’d written ten years prior, and revisit it one decade later in terms of some of the key plot points: commitment, May-December romance, single motherhood. Were there any great adjustments that the screenwriter needed to make for slightly shifting societal expectations?

AH: Yes, the time factor meant that a number of adjustments had to be made. I wrote the book in 2000-ish. Ireland had changed a lot by 2012, had peaked during the whole Celtic Tiger phase and crashed and was slowly rebounding again. Immigration had changed the country too, though the Gaeltacht – the Irish language region of Connemara – was less affected by the shifting tides of immigration than Dublin. I feel like Wiebke nailed that aspect of the adaptation; she contemporized the narrative but kept the essence of it.

I remember once, at an author-editor talk at a literary event, someone asked me what Stay was about and I said: “It’s a post-colonial, post-modern examination of Irish history and the …” and I sort of went on for a bit and my editor, Lynn, tactfully interrupted and said, “It’s a love story.” Wiebke contemporized the parts of the story that needed tweaking for the times and left the crucial bits: what it means to be an outsider, the surprise of finding love in unexpected places.

PRH: So much of Stay is about relationships and the expectations therein. What were you hoping readers and later audiences would glean from the perspective on relationships that you present in the film?

AH: I think a lot of my writing (not to sound snore-y) is about affection. There’s coming together and there’s tearing away. Yes, things break, but I think I wanted to say with Dermot and Abbey (and Abbey and Sean, and Deirdre and Liam) that we should love while we can, that it costs us nothing to see someone else as vital.

Yesterday in my office (I teach creative writing at a British Columbia university), a seventy-two-year-old student, speaking about his own experiences and themes, said to me, “Don’t throw anything away if it was once good” – and it reminded me of Stay, about how, for me, I knew the odds were stacked against Dermot and Abbey. But I knew that didn’t make their story or love any less meaningful, crucial, or pivotal.

I think some of the best films of the past year – “Boyhood,” “Whiplash,” “Birdman” – are about pivotal relationships: about expectation (and hope) and affection, and the roles we play; the way we want to be our true selves and still be regarded as valuable – as essential – by others.

PRH: In your new novel, The World Before Us, you go in a different direction, focusing instead on a story that is much larger than the character at its center. What was your inspiration behind this book?

AH: With this book, I wanted to talk about how the past presses on us in every instant, how we are, I suppose, naive in our sense of autonomy. I wanted to say look at where you have come from and who has lived before you; to look at how the past and the dead affect us, how they reside in the material traces of the world we walk through.

There’s a chaos theory element to the book too, how one act or one instant can overwhelm us and change our lives. The themes are larger but the idea of being tethered to something intangible is the same in both books.

AH: Oh, you’re totally outing me here! I don’t usually work this way but when I was in the early stages of writing The World Before Us I started to picture Jane as Emily Blunt – I loved Blunt’s vulnerability, the way she could be both beautiful and gawky if she wanted to. I loved her soft London lilt. Raffey Cassidy would be a great fiftenn-year-old Jane and actually could pass as a young Emily Blunt.

Blake would be interesting too – the character Blake (who is nineteen and comes in halfway through the novel) started off as a vague figure who kept insisting on being in the book even though I was trying to kick him out. Once I knew I was stuck with him, I borrowed the aesthetic of a young man I sat next to on a plane – I thought Wow, that’s what Blake would look like! – and then that poor young man sort of became Blake’s face. Once I saw “Stay,” though, I could totally see Barry Keoghan (who played Sean in “Stay”) as Blake. He’s brilliant! An actor to watch, I swear. I know he could do the Yorkshire accent because he’s a serious actor and quick study for dialect.

The funny thing is that I keep saying that The World Before Us is unfilmable – once again I’m doing the Gothic ghost thing – but I heard recently there have been inquiries about film rights. Emily Blunt, I say! Raffey Cassidy! Barry Keoghan. But I’m just the writer and totally understand that I wouldn’t have any say.