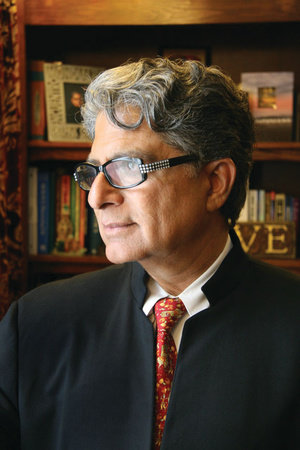 DEEPAK CHOPRA™ MD, FACP, founder of The Chopra Foundation, a non-profit entity for research on well-being and humanitarianism, and Chopra Global, a modern-day whole health company at the intersection of science and spirituality, is a world-renowned pioneer in integrative medicine and personal transformation.  Chopra is a Clinical Professor of Family Medicine and Public Health at the University of California, San Diego and serves as a senior scientist with Gallup Organization. He is the author of over 90 books translated into over forty-three languages, including numerous New York Times bestsellers. His 90th book and national bestseller, Metahuman: Unleashing Your Infinite Potential (Harmony Books), unlocks the secrets to moving beyond our present limitations to access a field of infinite possibilities.  For the last thirty years, Chopra has been at the forefront of the meditation revolution and his next book, Total Meditation (Harmony Books) will help to achieve new dimensions of stress-free living and joyful living.  TIME magazine has described Dr. Chopra as “one of the top 100 heroes and icons of the century.”

Sign me up for news about Deepak Chopra, M.D. and more from Penguin Random House

The Giving Way to Happiness

100 Questions from My Child

The Seven Spiritual Laws of Success

Belleza radical / Radical Beauty: How to Transform Yourself from the Inside Out

Inside the Book: Deepak Chopra (ABUNDANCE)

Inside the Book: Deepak Chopra (ABUNDANCE)

Inside the Book: Deepak Chopra (METAHUMAN)

PENGUIN RANDOM HOUSE:What Are You Hungry For? covers so much and yet it still remains so accessible. How did you maintain this balance while writing it?

DEEPAK CHOPRA: You become very mindful of what you’re writing and you want to see if you’re writing something that can actually be practical. So I was testing out everything that I was writing about, and it was obvious to me. I had gone to a conference that President Clinton gives once a year called “Health Matters.” I was a keynote speaker there, and what was discussed was that the biggest epidemic right now is obesity and diabetes, which in one way or another is responsible for all the other epidemics we have – cardiovascular illness, cardiovascular disease, strokes, inflammation, many types of cancer, arthritis, bronchial asthma, kidney disease, blindness – all related to obesity.

And being a writer, I am very aware. There are a bunch of diet books and they all do very well – but none of them works. And I realized that if there was a diet that was perfect, then how come we hadn’t found out which one it was? It is very obvious there is no such thing. Your body is actually a self-regulating biological organism and we interfere with it. And once we stop interfering with that self-regulation it knows how to go into balance by itself. And that includes normalizing your weight. There are things that people should know but don’t: If you don’t get enough sleep, you disrupt hormones that are responsible for regulating appetite; if your mood is not good, when you eat it transfers the food into a toxic metabolic pathway causing increased cholesterol and fat deposition in the belly; stress directly causes belly fat and that belly fat in itself is an endocrine organ that metabolizes steroids in an abnormal pathway leading to further gain weight; if people starve, they will secrete a hormone called adiponectin, which gives the body a message that there is a famine coming, so you hold onto more fat. You know, everything we do is kind of counterproductive to maintaining balance. And that’s how I wrote the book. My background in endocrinology really helped me because I see the connection between sleep/wake cycles and hormones, between stress and hormones, between starvation and hormones, and so forth.

PRH:Did you always know that you were going to write a book that directly addressed diet or was it at the Clinton conference that the idea first came to you?

DC: It was at the Clinton conference. President Clinton was saying if we don’t take care of this epidemic, America’s future is at stake. And that includes America’s economic future and future as a leader in the world. I also work at the Gallup Organization as a senior scientist, and we now know that everything from hospital admissions, to traffic accidents, to crime rate, to social unrest, to the quality of leadership, is in one way or another correlated with the health and wellbeing of its people, of the people of the country, of the community, of the business. It’s all correlates. And so it’s kind of sad in a sense that half the world is starving and we here are malnourished from the other point of view, from the extreme opposite of that point of view.

Through the Chopra Foundation, I’ve started the Weightless Project, a calorie footprint for people. So every time they lose weight and burn extra calories, by moving and living healthy lifestyle, wellness companies sponsor the equivalent amount of food for hungry children in Africa and India. We wanted to start a movement in the world where we, you know, feed the hungry and get obese to get healthy at the same time.

PRH: For people who are struggling themselves with obesity, what should they start with and what is the single most important thing as they decide to make these changes in their lives?

DC: Well, you know, we call the book What Are You Hungry For? They should ask this question. What am I hungry for? And then also gauge their hunger level and only put food in your body when you’re hungry, physically hungry. We’ve created a little band that they can wear around their wrist called “What Are You Hungry For?” so before they put food in their mouths, they ask that question. They use the STOP formula. S.T.O.P. So “S” stands for stop. “T,” take a breathing break. Take three or four deep breaths. “O,” observe your body, your hunger level. Ask yourself the question, “What am I hungry for?” “P,” proceed with awareness. Start practicing some awareness, that’s all.