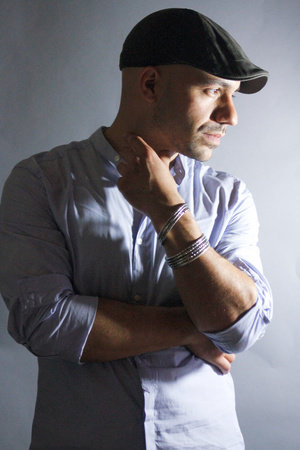 Daniel José Older is the New York Times bestselling author of the young adult series The Shadowshaper Cypher, the Bone Street Rumba urban fantasy series, and the middle-grade historical fantasy Dactyl Hill Squad. He won the International Latino Book Award and has been nominated for the Kirkus Prize, the Mythopoeic Award, the Locus Award, the Andre Norton Award, and the World Fantasy Award. Shadowshaper was named one of Esquire’s 80 Books Every Person Should Read. You can find his thoughts on writing, read dispatches from his decade-long career as an NYC paramedic, and hear his music at his website, on YouTube, and on Twitter.

Daniel José Older is the author of the urban fantasy series Bone Street Rumba. It is the story of Carlos Delacruz, a man neither fully alive nor fully dead. We discussed Carlos and his haunted world with Older at New York Comic Con 2017.

Daniel José Older: Yes, absolutely. I write about ghosts all of the time, and it’s really fun. I was a paramedic for about ten years. Being around life and death in such a vivid and visceral way every single day, you really start to think about it differently. There’s a level of comfort that starts to develop that I’ve tried to bring to my work. Death is a part of life. It’s interesting to think about that in terms of the ghost story: How we recognize our ancestors, and how we think about it in a more complex way than just that ghosts are trying to kill us.

PRH: As a paramedic, did you get a sense that we are closer to death than we think? That we take life for granted?

DJO: It is everywhere, and I don’t think we’re taught how to function with that as a constant understanding, because we tend to, particularly in this society, try to have death as something that’s on the margins. We regulate it to conversations we have in hospitals, to grim stories we tell, and to the graveyard, and in reality, death is everywhere. You see it as a paramedic because you’re called to deaths in every possible location of the city, whether that’s someone’s house, or a train station, or gutter, or a fancy hotel. Death is the great equalizer, as they say. Culture still plays a role in how we die, and how we treat people after they die, but there’s no escaping it. There’s a power to that for sure.

PRH: I’ve read before that death plays a role in all of our creative processes; that it is a great motivator in the arts. Do you think about your own death?

DJO: No. Not at all! I think one of the paradoxes of ghosts stories is that they’re really about life. We think we’re writing about death, but we’re really writing about something that is so driven by the force of life that it surpasses death — that it went beyond death and continued to exist on some level. Whether that’s for malevolent purposes or good ones, there’s a lot of options, but it’s always about the continuation of life beyond death.

PRH: Where are we with Bone Street Rumba?

DJO: It is finished, which is kind of amazing.

PRH: How did it feel to put it behind you? Has it been buried for good, or is there a chance that it will return to life?

DJO: I feel like it is half-dead, much like its protagonist. It is pleasantly at rest, I would say, but I did write the third novel with a lot of possibilities for other characters to grow out of. Carlos’ arc is done, which is what it was really about.

PRH: Could we see this turning into a television series?

DJO: We could. It has been optioned, so we’ll see what happens. Anika Noni Rose optioned it. She’s incredible.

PRH: What are you working on right now?

PRH: Tell me something you are allowed to talk about!

DJO: Okay. I just dropped the sequel to my young adult novel Shadowshaper. It’s called Shadowhouse Fall. It is set in the same world as Bone Street Rumba, so if you’ve read those, then there a lot of crossover characters, themes, and locations. I love world building. It’s my favorite thing to do, so this was like a giant exercise in cross-platform, cross-genre, cross-publishing house world building to have all of these characters running around a magical, haunted Brooklyn.

PRH: Are you a lifelong New Yorker?

DJO: No, I was born and raised in Boston. I’ve been here for about 14 years.

PRH: So you were living here when you wrote the series.

DJO: I feel like all of those maps overlap. Everyone has maps of cities that they’ve been to and lived in a lot: ones that are made of memories and imagination. At least, I think every writer does. I’ll walk around and think, “Oh, that’s where I did that shooting 10 years ago, and that’s where the guy had a heart attack. That’s where Sierra went when she needed help, and Carlos was when he was thinking about this thing.” There are all kinds of very intense and interrelated maps overlapping what happened. That map also goes forward and back, and so whatever I’m working on at the moment will make me think whether or not a cross-street i see is something I can bring into fiction. Is it something I can turn into something else, bewitch, and bring to life?