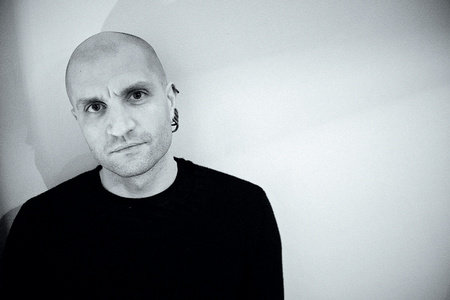 China Miéville is the author of numerous books, including This Census-Taker, Three Moments of an Explosion, Railsea, Embassytown, Kraken, The City & The City, and Perdido Street Station. His works have won the World Fantasy Award, the Hugo Award, and the Arthur C. Clarke Award (three times). He lives and works in London.

Three Moments of an Explosion

Out of the Ruins

China Mieville is still in his twenties, but he’s already forging a
formidable writing career. His first novel King Rat was nominated for
both the International Horror Guild Award and The Bram Stoker Prize.
Perdido Street Station, his second novel, has generated enormous buzz
and extraordinary reviews in the UK, and is currently nominated for both
the Arthur C. Clarke Award and the British Science Fiction Association
Award. Scheduled for a March 2001 release in the States, Perdido Street
Station is a huge, sweeping novel revolving around the fantastical city
of New Crobuzon, a place that Time Out described as "one of the finest
creations in speculative fiction."

To find out what Mieville thinks about when he’s developing alternate
worlds, read on.

‘Some seventeen notable empires rose in the Middle Period of Earth.
These were the Afternoon Cultures. All but one are unimportant to this
narrative…’

These are the opening lines of M. John Harrison’s stunning Viriconium
sequence, in which he casually writes the most important rule about
world-building that I know. Histories, laws, cultures, aesthetics –
worlds – are colossal, and colossally complex. There is no way you can
ever tell the story of a whole world. No matter how detailed your
timeline or carefully illustrated your bestiary, you can’t possibly
explain everything. If something’s not important to the narrative, then
don’t try – there are only so many info-dumps a story can take, and I
save mine for the stuff that the reader has to understand. The rest of
the strange things, or races, or places – they’re just there. They just
happen. Put them in, describe them, and leave them alone, even if that
leaves the reader uncertain. That’s fine. In fact, it’s good – it’s
culture shock. Hopefully it communicates a sense that there is a world
beyond the book, in which the story occurs, rather than a story with a
few fantasy props thrown in.

There are few greater pleasures in Weird Fiction than a really cool
monster, an unusual alien race. Which is why it makes no sense to me to
cull your creatures from the list of the usual suspects. Elf, dwarf,
centaur – you know the drill.

The best of the fantastic tradition – take Surrealism – is all about
using the fantastic to challenge, to alienate, to create a grotesquerie
that keeps the reader surprised. Usually, identikit aliens serve the
opposite function, because they’re not alien at all. They’re comforting,
because they’re so recognisable. That kind of fantasy isn’t nearly
fantastic enough.

I’m not saying that it’s impossible to write a good, innovative fantasy
with elves and dwarfs in it (Michael Swanwick’s The Iron Dragon’s
Daughter gives the lie to that). I’m just saying that I can’t do it. And
anyway, half the fun is inventing these creatures – why not take the
opportunity to create them from scratch, or plunder mythologies more
unusual than Tolkienesque fairyland? And once you’ve invented your race,
remember that race, culture and character are three very different
things. Few things in fantasy annoy me more than having a particular
race act as a signifier for a particular kind of character. Why are
elves all clever and fey? Are there any dwarfs out there who aren’t
gruff and good with their hands? And what happens if you’re an orc but
you’re not, you know, evil?

This is just racial stereotyping in fantasyland. And it makes for
explanations as unconvincing as the same activity in the real world. Of
course there’ll be cultural differences between different races, but
there again, why would those races be monolithic? Is it really likely
that in your carefully constructed land, two different groups of
wing-kobolds thousands of miles apart are going to be basically the
same? Surely they’ll be as varied as the Aztecs, the !Kung-San and the
Victorian British. Just like us, now.

But of course cultures aren’t monolithic even within themselves. There
are a whole mass of conflicting objective interests and impulses
embedded in each one. Conflict is not usually the result of some Dread
Dark Lord who is threatening things from the outside. Usually there are
quite enough tensions cooking up internally to keep things interesting.
Even the nicest ‘Good King’ has to get that palace from somewhere, and
more than likely it’s from where his real-life counterparts got theirs:
plunder, sharp metal and the unpaid work of the peasantry. Remember
that, and your world is likely to be a lot more compelling.

It’s paradoxical, trying to depict a world that’s simultaneously
convincing and utterly fantastic. But one idea unites the two impulses:
the recognition that things are not neat and tidy or monolithic, but
complex and contradictory, contingent, constantly suprising and far more
interesting for all that. That could describe the best and strangest
fantasy, and the most hard-headed depiction of reality. That’s why Kafka
is a realist, and why we can have it both ways.

Penguin Random House: What do people need to know about Railsea? What’s the essential premise?

China Mieville: Basically the book is pinned on a very simple, very silly joke, which is Moby Dick — only with moles instead of whales, and once you do that then a lot of things spin off from it. If you’ve got moles, which are rising out of the earth instead of rising out of the sea, then obviously you’re not chasing them on ships. So, then what are you chasing them on instead? You could have said cars or carriages, but I like the idea of trains because it’s so counterintuitive since trains supposedly have fixed routes and the sea is infinitely possible — so how do you get around that? You get around that by having a tangle of rails that goes on forever and so on and so forth. So the basic peg was the combination of a very silly joke about a kind of misprision of Moby Dick combined with an interest in inverting the usual cliché about the teleology of the railway.

SIG: Moby Dick is an influence on Railsea. How do you keep that recognizable but not create a derivative work?

CM: I can only speak for myself — obviously different writers are going to do it different ways — but for me, while Moby Dick is an enormous touchstone, the book is not intended to be a retelling at all. It takes a couple of aesthetic and philosophical tropes and a basic narrative hook — look for that big, weirdly colored animal — and it goes off and does whatever it wants. There are books that retell particular stories in different settings. You have a retelling of The Odyssey or Beowulf in a different setting — but that wasn’t my aim; it’s not a structure that particularly interests me. There’s absolutely no slavish attempt to follow the structure of Moby Dick; it was really more as just a kind of hook and then kind of whirring off and taking influences from other stuff. There are other influences, maritime books. It riffed on Treasure Island, Kidnapped, Robinson Crusoe and various other things. The way that I hope that it doesn’t become completely derivative is that it always had kind of a relaxed attitude. If you like, a piratical attitude toward its source material.

SIG: The captains in Railsea are chasing “philosophies.” What are those?

CM: This is a world in which there are lots and lots of burrowing animals, which are mostly very dangerous and voracious and the captains are hunting them. If we have learned anything from Moby Dick, it is that chasing giant hidden animals is a kind of intrinsically metaphorizing thing to do and much ink has been spilt on what exactly it is that is being chased. What does, to use that horrendous phrase, Moby Dick represent? It’s just such a horrible, deadening way to think about fiction, but it’s also something that is done a lot. I like the way of literalizing that and affectionately riffing on it and spinning it out a little bit so that it’s done more directly and more explicitly. Where as I suppose that you could say, very crudely, that in Moby Dick the captain is chasing the whale and we the readers are aware that he is also chasing whatever that symbolic thing is. The only thing that is different in Railsea is that the captains are also aware that they are chasing symbols as well as actual animals. Some people might see it as a metaphor for scholarship. I couldn’t possibly comment!