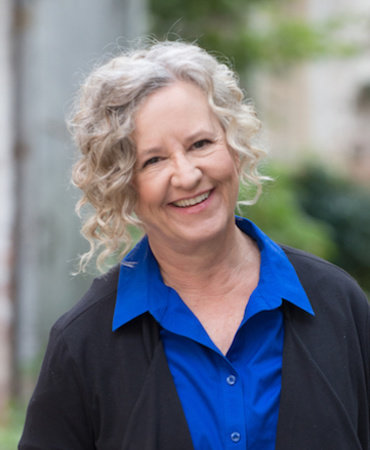 Trudy Nan Boyce received her Ph.D. in community counseling before becoming a police officer for the City of Atlanta. During her more-than-thirty-year career she served as a beat cop, homicide detective, senior hostage negotiator, and lieutenant. Boyce retired from the police department in 2008 and still lives in Atlanta.  She was awarded both a Georgia Author of the Year Award and a Pinckley Prize for her debut, Out of the Blues.

Out of the Blues

PENGUIN RANDOM HOUSE: You have more than thirty years of experience working in the Atlanta Police Department; you’ve even worked as a homicide detective, like your protagonist Sarah “Salt” Alt. Out of the Blues is your debut novel. How much, if any, of Out of the Blues is based on your own experiences in law enforcement?

TRUDY NAN BOYCE: Many of the characters in Out of the Blues are amalgams of people I met while I was on the job. I did work the most densely populated housing project in the city, on evening watch and most of the time as a single-man car. I got to know quite a few of the gang members. Working alone I needed all the good relationships I could garner, with all kinds of people. The cops in Out of the Blues were also composites of people I knew or worked with. Almost all of the situations Salt finds herself in were at least in part inspired by either my own experiences or the experiences of my colleagues.

PRH: In that same vein, would you say that Salt’s character is at all based on yourself?

TNB: Salt is far more athletic than I, although I’ve always been fit; she’s really fit and faster. She’s also had a more troubled past. I guess the things she and I share are a dedication to the people of the community and she and I would both probably be described as intense.

PRH: Transitioning from cop to novelist — it’s unexpected, though it does make for a gripping crime novel! Did you always want to write?

TNB: From childhood, as I suspect it is with many writers, I’d been an obsessive reader of fiction, particularly. But I’d not thought of writing much other than a dissertation and police reports — just the facts ma’am.

In 2001 I had a number of tragedies pile up in my life. At that time I was working as a supervising sergeant in Crimes Against Children. It was my responsibility every day when I came in to go through the reports from the field from either the uniform officers or from child services and to assign those reports to my detectives. That essentially meant that every day I reviewed approximately forty reports of children alleged to have been either abused, sexually or physically, neglected or those who’d run away or were missing. Understandably my marriage began to suffer and eventually I became divorced. That same year my best friend of thirty years died of breast cancer. We’d been the kind of friends, closer than family, talking on the phone every other day, getting together once a week, at least, and had seen each other through marriages, divorces, child rearing, and so much more. So when she died I needed to find an outlet; I signed up for a creative writing class at a local fine arts center. My friend had been a burgeoning writer. The first assignment the teacher gave us was to describe following someone. I had a leg up on that one. I immediately flashed on a night I’d been on patrol and a woman jumped out in front of my patrol car asking me to help her find her man and that she’d “cut” him. That woman’s fictional counterpart, as well as her fictional son, daughter, boyfriend, and mother became central characters to what was to become Out of the Blues.

PRH: Salt has been shot in the head and bears the scar to prove it, tussles with unwieldy criminals sans backup, and is the only woman in her unit. She makes for quite a dynamic heroine, who readers will surely latch on to. Do you have any future plans for Salt that you can tell us about?

TNB: Out of the Blues is one novel in a trilogy. Salt will continue to tussle both alone and aided by some of her friends and colleagues. There will be developments in her relationship with Wills. And more mysteries will be explored in the City of Atlanta.