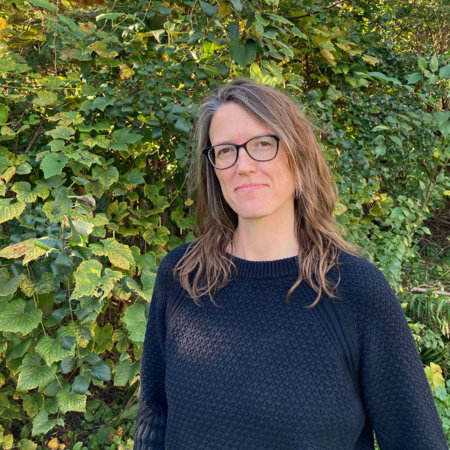 LAURIE D. GRAHAM grew up in Treaty 6 territory (Sherwood Park, Alberta). She currently lives in Nogojiwanong, in the treaty and traditional territory of the Mississauga Anishinaabeg (Peterborough, Ontario), where she is a writer, an editor, and the publisher of Brick magazine. Her first book, Rove (Hagios Press, 2013), was nominated for the Gerald Lampert Memorial Award for best first book of poetry in Canada. Her second book, Settler Education (McClelland & Stewart, 2016), was nominated for Ontario’s Trillium Award for Poetry. Her poetry has been shortlisted for the CBC Poetry Prize, won the Thomas Morton Poetry Prize, and appeared in the Best Canadian Poetry anthology. She holds a BA in English from the University of Alberta, a BFA in writing from the University of Victoria, and an MFA in creative writing from the University of Guelph. Laurie’s maternal family comes from around Derwent, Alberta, by way of Ukraine and Poland, and her paternal family comes from around Semans, Saskatchewan, by way of Northern Ireland and Scotland. She has about a century of history in Canada.

Sign me up for news about Laurie D. Graham and more from Penguin Random House