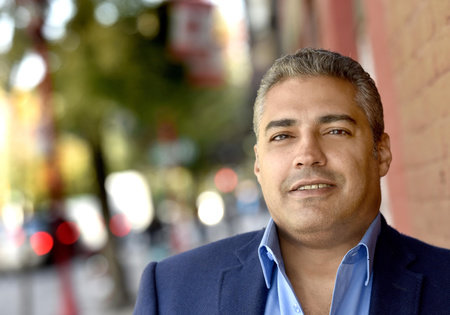 MOHAMED FAHMY, a dual Canadian-Egyptian citizen lives in Vancouver and works as an adjunct professor at UBC. He has reported on the Middle East and North Africa for CNN, the LA Times, and BBC. In 2011 he and his CNN associates were honored with a Peabody Award for the network’s coverage of the Arab Spring; he also co-authored the photo documentary Egyptian Freedom Story. In 2012 he won The Tom Renner Investigative Reporting Award for producing the CNN Freedom Project documentary series Death in the Desert, which exposed the trafficking of Sub-Sahara Africans to Israel through Sinai-Egypt. He was appointed Al Jazeera English Bureau Chief in 2013. He is the recipient of the Canadian Committee for World Press Freedom Award from UNESCO. He and his wife, Marwa Omara, founded the Fahmy Foundation NGO in 2015, dedicated to providing financial assistance and advocating on behalf of imprisoned journalists and photographers around the world.