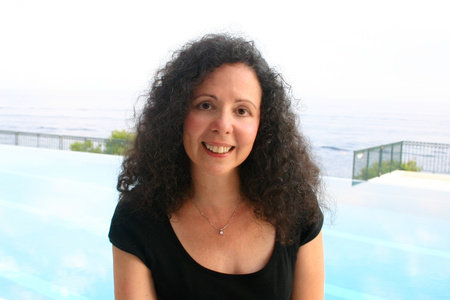 Camille Aubray is an Edward F. Albee Foundation Fellowship winner. A writer-in-residence at the Karolyi Foundation in the South of France, she was a finalist for the Pushcart Press Editors’ Book Award and the Eugene O’Neill National Playwrights Conference. She studied writing at the University of London with David Hare, Tom Stoppard, and Fay Weldon; and with her mentor Margaret Atwood at the Humber College School of Creative Writing Workshop in Toronto. Aubray has been a staff writer for the daytime dramas One Life to Live and Capitol, has taught writing at New York University, and has written and produced for ABC News, PBS, and A&E. The author divides her time between Connecticut and the South of France.

It started with a nugget of factual truth: In 1936, Pablo Picasso, troubled by his marriage to the point of being unable to paint, left Paris for Juan-les-Pins, a fishing village on the French Riviera. No one knows for sure what happened to Picasso while there, only that he left able to paint again. Camille Aubray took this piece of truth and wove the story of imagined seventeen-year-old Ondine and Café Paradis around it to fill in the blanks of Picasso’s time in Juan-les-Pins, giving us the perfect summer read with Cooking for Picasso. Aubray chatted with Penguin Random House about her novel, her love of France, the advice Margaret Atwood gave her, and more. Visit the author at her website to see her photo gallery of the places that inspired her nove.

PENGUIN RANDOM HOUSE: Your new novel, Cooking for Picasso, centers around the artist Pablo Picasso’s arrival in a small town called Juan-les-Pins on the French Riviera in 1936. Picasso is seeking anonymity and solitude. While there, he engages the service of a local restaurant, Café Paradis, to provide his meals. The seventeen-year-old daughter of the proprietors, Ondine, is called upon to follow through on this task. What was it about this setting and this artist that inspired you to bring this story to readers? Did you base this arrangement on any real story?

CAMILLE AUBRAY: I spend a lot of time on the Côte d’Azur, inspired by the lovely people, their Provençal culture, the natural wonders such as the unique light and the dazzling sea — all the things that have influenced centuries of artists, writers, and musicians — from Nietzsche to Keith Richards! Who, by the way, recently shook my hand to congratulate me on the publication of my new novel, which he heard about while we were each dining at the same French café. Keith, not Nietzsche.

And yes, Cooking for Picasso is based upon a true incident in 1936, when Pablo Picasso was so overwhelmed by his troubled marriage that he found himself, for the first time in his life, unable to paint. So, in great secrecy, he traveled from Paris to a fishing village called Juan-les-Pins, on the French Riviera, during springtime, a quieter season. Here he rented a villa, using a different name in order to remain anonymous. No one is certain about what happened to him while he was there, but suddenly he picked up his brush and began painting again.

PRH: How much creative liberty did you take in the other details of the history-placed portion your novel? Is Ondine based on a real character? Where did you draw the lines on fact versus fiction?

CA: Fiction of course isn’t fact or biography, but it has to be true in the sense of being true to human nature, true to its time period, true to the source of its inspiration. So the historical material in my novel comes from extensive research and real events, which are a springboard for my fictional character’s story, in which I invented new situations to reveal Picasso’s personality in all its contradictions.

And in the course of researching the artwork that Picasso produced during this period, I found another intriguing source of inspiration — a pair of paintings of an unidentified, dark-haired woman, very different from his usual models. Nobody knows for sure who she was, which left me free to create Ondine, a fictional character inspired by the girl in the painting, whom I envisioned as a young chef.

PRH:Did you spend any time in Juan-les-Pins to research your book?

CA: Bien sûr! I felt I had to immerse myself in Picasso’s world and follow in his footsteps. So I spent much time not only in Juan-les-Pins, but in a town called Mougins, where Picasso lived and eventually died. Mougins is a great center of gastronomie. Surrounded by all the fabulous cafés, farmers’ and fishermen’s markets, and Michelin-starred restaurants of the French Riviera, I couldn’t help thinking about what Picasso ate — and who cooked it for him.

PRH: Cooking for Picasso takes us forward, as well, nearly eighty years, where a modern-day, American character called Céline learns that her grandmother Ondine once cooked for Picasso. She is intrigued by this fact and decides to head to the town to investigate. What was your thought process like in deciding to add a present-day element to the story, rather than let it live entirely in the 1930s?

CA: I gave a lot of thought to the kind of impact that a famous, powerful man like Picasso might have on the destiny of a young woman like my character Ondine. I knew that such an encounter could be life-changing, and in order to reveal this, I didn’t limit myself to this one historical incident in 1936. I moved through the years to focus on key moments, which let the reader see how Ondine progressed with her own dreams and ambitions — all the while encountering Picasso again and again, at times that were greatly significant in his life, too.

Furthermore, in following Ondine’s destiny, it was natural to think about who her daughter Julie would be, and what her American granddaughter might become. And so, Céline was born!

But, I don’t believe in making jarring transitions from one chapter’s perspective to another or from one time period to another. There’s a more organic way to integrate them; if you time the incidents in the novel just right, you can make the characters’ perspectives — in this case Ondine’s, Julie’s, and Céline’s — and even Picasso’s at times — resonate and play off each other, to illuminate the significance of each event in a pleasurable way, to deepen the feeling, to make it more suspenseful and to instinctively evoke the reader’s anticipation, dread, understanding, empathy.

PRH: Other novelists in contemporary times have written novels around works of art or artists. What do you think it is about that medium – paintings – that inspires the written word in this way?

CA: Art, like music, has an immediate, visceral impact. A great painting speaks to you; it challenges and haunts you, just like a song which reminds you in a Proustian moment of universal truths and personal buried longings. Picasso could look at a face and present all its facets simultaneously. Yet no matter how abstract a picture was, I found his art quite accessible and warm-hearted, playful. You need a sense of humor to understand him; you need to love the earthly paradise, as Colette called it, and yet be unafraid to look at the dark side of humanity, too, as in Picasso’s masterpiece about the effects of war, Guernica.

PRH: If you could have any artist dead or alive paint your portrait, who would you choose? And would you keep the portrait or sell it?

CA: Oh dear, must I choose from among the great artists in Cooking for Picasso? Picasso would distill what he saw of you in a fantastic, startling way; Matisse would find your inner colors; Cocteau would mythologize you. They’d all be wonderful. But, as my character Ondine notes, Rembrandt really captures your soul in your flesh. So I think I’d choose Rembrandt.

As for keeping my portrait or selling it, well, I hope I’d never find myself in the kind of dire situation that prompts my characters in this novel to think of selling such a treasure. But I can tell you one thing I’d never do — I would not store art in a museum basement or an investor’s vault! I feel strongly that art is meant to be seen, and not just by a privileged few.

PRH: You’ve studied with Margaret Atwood at the Humber College School of Creative Writing Workshop in Toronto. What’s the single most important piece of writing advice you’ve received from her?

CA: “Drink more water.” Seriously, she said that, and what’s more, she meant it. And it’s true. You can get so immersed in your writing that hours, days, weeks, months go by. But you have to eat, sleep, take care of yourself. She also said, “You only have what’s on the page.” Meaning that no matter how much research and ideas you’ve got swirling in your head, you have to get the important stuff onto that sheet of paper, or else your story doesn’t exist for others as you imagine it. The dancer Baryshnikov said something similar, about having the boundaries of the stage to work with. So you need to really get to know the whole area and perimeter of the page and the stage.

PRH: What advice would you give to any writer who is suffering a bout of writer’s block?

CA: From what I can see, writers’ block seems to stem from one of four causes:

Number One: The writer wants to create, but s/he hasn’t yet mastered the tools of the trade. At such times, it’s best to scale back the size of what you’re tackling, and study with someone you trust.

Number Two: The writer’s motivation is skewed — he’s not trying to write because he has something he urgently must get on paper before he dies — he wants to write only because he has a deadline and he’s already spent his advance, and besides, he needs to prove to himself, his parents and his friends that, even though he didn’t go to law or med school, he still has a worthy career.

Number Three: The writer has something to say and knows how to say it, but he can’t write because there is something in his personal life that urgently needs his attention and which he doesn’t really want to face: his debts are mounting, the roof is about to fall in, his wife is ill and his kids are starving, or he’s just plain exhausted and ill. Contrary to what the world likes to believe, starvation and turmoil are not good muses. You have to put on your own oxygen mask first before you can put oxygen into your novel.

Number Four: The writer is mired in a rut and desperately needs a change of scenery and a fresh take on life. At such times, like Picasso, you just have to quietly leave town, and find yourself again.