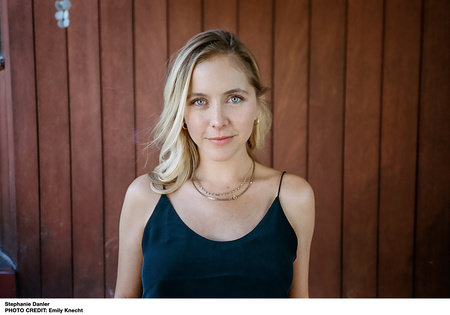 STEPHANIE DANLER is a novelist and screenwriter. She is the author of the international bestseller Sweetbitter and the creator and executive producer of the Sweetbitter TV series. Her work has appeared in The Sewanee Review, Vogue, The New York Times Book Review, and The Paris Review Daily. She lives in Los Angeles, California.

Sweetbitter tells a tale as old as New York City: A young woman leaves the average life she knew behind for a chance to experience life at its most exhilarating, and what place is more exhilarating than Manhattan? An instant national bestseller, Stephanie Danler’s debut novel, Sweetbitter, generated an enormous amount of pre-publication buzz. Readers were drawn to Danler’s own story — she wrote Sweetbitter while working as a waitress at Buvette, where she pitched her manuscript to Knopf Senior VP Peter Gethers who promptly offered her a six-figure, two-book deal — but they were also drawn to her rich, effortlessly sensuous prose and to the story of her protagonist, Tess.

Tess moves to NYC at the novel’s start and takes a position as a backwaiter in a high-end restaurant in Union Square (a restaurant that has Union Square Café written all over it). Her efforts to assimilate to city life become a crash course in fine wine and restaurant politics, paired with a breakneck love affair with the city after dark. We spoke with Stephanie Danler about where she and Tess diverge, what she loves most about New York City, and what the overwhelmingly positive response to her debut novel has been like for her.

PENGUIN RANDOM HOUSE: Sweetbitter is about twenty-two-year-old Tess, who moves to New York City and becomes a backwaiter at a high-end restaurant in Union Square. You were a waitress yourself after graduating college (you’ve worked at Buvette, Tia Pol, and Union Square Café). To what extent would you say Sweetbitter is based on your own life? How closely do you identify with Tess?

STEPHANIE DANLER: Tess inherited a few facts from my biography – she moves to New York City the same year that I did, 2006, at the same age I did, and she got my shitty first apartment in Williamsburg. She also got a job that looks a lot like my first job. But perhaps the most autobiographical aspect of the novel is that she falls recklessly in love with restaurants – with the work, the food, wine, people, and with the city. That’s an experience with which I identify closely. However, the book is fiction, and the characters are made up, so Tess is fictional herself. I never had a Jake in my youth, so I had to invent how she would react to him. Honestly, I identify more with Simone. I was born world-weary. I aspire to Tess’s optimism. She’s brave in a way I never was.

PRH: As a backwaiter at a high-end restaurant, Tess works odd hours (she calls it being an “Industry Person” as opposed to a “Nine-to-Fiver”). The foundational differences in the lives of “Industry People” versus “Nine-to-Fivers” is a theme that permeates much of the novel. Could you speak to the appeal of being an “Industry Person,” and the friction between those two very different lifestyles? There was something so very “New York” about Tess’s life as a backwaiter.

SD: I think the “New York” aspect is full immersion in your work. People don’t dip in and out of professions here, because to be successful in any field requires total commitment and attention. Tess goes into backwaiting the way people throw themselves into finance or fashion. That’s a universal experience — of being initiated into a society, learning its codes and rituals. Of course, her job is dependent on those traditional industries – she clocks in as they clock out. It’s an interesting power dynamic – service industry people are literally serving, in a submissive position for most of the night. Their salary is dependent on the whims of the dining class. That’s why at the end of the night they make fun of the guests, they get ravenous for attention and play. They are trying to restore their humanity after being invisible all night.

PRH: Among many other things, Sweetbitter is about New York City. The city itself becomes a character as Tess initially struggles for entrance to it, and then becomes consumed by it. Why did you choose to set your novel in NYC? What do you think makes it such a tantalizing place to write about?

SD: New York City is where people come to push themselves to the top of their fields, so it attracts the ambitious, hungry, the young. It’s also where you come to test yourself – you must have something of a warrior spirit to even desire living here. You have to be interested in the struggle. Otherwise it’s just too hard, why bother? It also tends to attract orphan types, people not necessarily attached to their families, or people interested in being distanced from their old identities. You have so much anonymity when you arrive here, which is incredibly freeing when you’re interested in reinvention. There’s a long, literary tradition of men and women coming to the city to disappear and reappear as better versions of themselves – they fail, they succeed, they land somewhere in-between. That’s an inexhaustible narrative arc! And as long as these people keep moving to New York City, people will keep writing about it.

PRH: How would you characterize your own relationship with NYC? What does it mean, to you, to be a New Yorker?

SD: After a decade, my relationship with New York City is conflicted, which is wonderful for writing but hard for living. I’ve always had a full, rich life here, but it’s also very punishing. I can’t be here and not work seventy hours a week. For most of those ten years I had multiple jobs. I’ve never achieved any work/life balance in the city. At this point in my life, I need solitude to write. New York has become noisy since publishing Sweetbitter – and it’s stimulating and intoxicating like always – but I am in a phase where I value quiet.

Also, being a New Yorker – for me – is the subway. Riding the subways with music, or a book, or just staring into space working through a piece of writing in my head, is one of my great private joys, and the thing I miss the most when I’m not in the city.

PRH: Tess endures myriad humiliations as she struggles to learn the ways of her new job and the ways of the city. The embarrassment of being new is something most people shy away from talking about. So much of your book is devoted to it — why do you think it’s important to write about those feelings of isolation and anxiety?

SD: Embarrassment is one of the most universal experiences of everyday life. It’s unsettling to watch children learn it, we aren’t born with it. Shame has so much power over us, informs the way we talk to ourselves, the way we treat others. We are all suffering from an inner monologue of things we’re ashamed of, critiquing ourselves, analyzing our missteps and mistakes. Talking about that shame takes away some of its power. Once Tess is open about her flaws and failings, she can master them. The exposing of Tess’s inner monologue is what makes her authentic – so many characters in fiction are flat because we don’t see their vulnerability.

PRH: It’s impossible to ignore the fact that we only know Tess in New York; the book begins with her entrance to the city, and very little of her previous life is revealed. Readers, then, get to know Tess as she gets to know her new self, awakened by the rush of city life. Why did you choose to omit her backstory?

SD: The novel is about a specific moment – a year in which Tess starts to become her adult, womanly self – and that moment is inextricably tied to New York City and the restaurant. She is an experiment in the present tense, and I find it to be so true to my life in the city. That your life does start when you cross the bridge and have autonomy, freedom, financial independence. After a lifetime of being acted on, she’s learning to take action herself. And it’s so true that in restaurants you can work with people for years and still not know their last name. It’s a temporary, present-tense intimacy that doesn’t depend on the past or future to give it intensity.

PRH: The story of your own success has swept the book world off its feet. From where you stand now, is there any advice you wish you could give your younger self? Do you have any words of advice for young aspiring writers?

SD: I never feel qualified to give advice – I muddled my way through this process, asking for help, making mistakes – which is what every first-time novelist does. The only real advice I have for writers is to finish their projects. I had a professor say that to me once, and it felt so obvious, but it’s actually quite difficult. So many people start novels, but it’s a miracle to finish one. The only way to publish is to finish that first draft – you’re going to revise it a dozen times, so don’t be precious about it. You won’t know what kind of animal you’re dealing with until you get to the last line.

And to my younger self, I would only say, Please be kind to yourself.