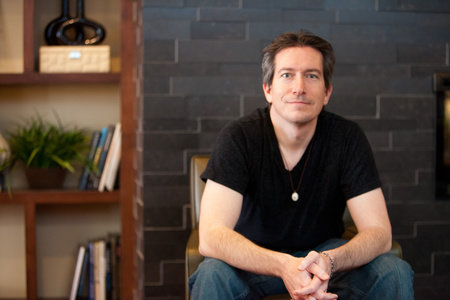 Bradley P. Beaulieu fell in love with fantasy from the moment he began reading The Hobbit in third grade. While Bradley earned a degree in computer science and engineering and worked in the information technology field for years, he could never quite shake his desire to explore other worlds. He began writing his first fantasy novel in college. It was a book he later trunked, but it was a start, a thing that proved how much he enjoyed the creation of stories. It made him want to write more. He went on to write The Lays of Anuskaya series as well as The Song of Shattered Sands series. He has published work in the Realms of Fantasy Magazine, Orson Scott Card’s Intergalactic Medicine Show, Writers of the Future 20, and several anthologies. He has won the L. Ron Hubbard Writers of the Future Award and earned a Gemmell Morningstar Award nomination. Learn more about Bradley by visiting his website, quillings.com, or on Twitter at @bbeaulieu.

Sign me up for news about Bradley P. Beaulieu and more from Penguin Random House

When Jackals Storm the Walls

Beneath the Twisted Trees

A Veil of Spears

It’s not hard for me to say that. I’ve been reading it from the beginning, both novels and novellas. Now the third book, A Veil of Spears, has just published and I can’t wait to get out, buy it, and relax on my couch to read it. It is one of those series that defies normal convention. All I can say is this: Beaulieu’s work has complex characters, a great setting of the city and the desert, secrets and mysteries and conflict. The author also weaves a wonderful sentence, paragraph, page, making it a real treat to read. And the worldbuilding is top notch.

To celebrate the release of A Veil of Spears, I have interviewed Beaulieu below. But first, here is a bit more about the book from someone I impeccably trust, bestselling author Robin Hobb: “Çeda and Emre share a relationship seldom explored in fantasy, one that will be tried to the utmost as similar ideals provoke them to explore different paths. Wise readers will hop on this train now, as the journey promises to be breathtaking.”

Enjoy our interview below! And be sure to check out this series!

PENGUIN RANDOM HOUSE: A Veil of Spears is in fine bookstores tomorrow, the third book of your Song of Shattered Sands series. Tell readers about the series and how you came to create such a diverse and expansive world?

Bradley P. Beaulieu: The series follows the exploits of Çeda, a young woman whose mother was mysteriously killed by the twelve kings who rule the desert city of Sharakhai with a collective, iron fist. What began as a quest for revenge turns into a journey of discovery for Çeda when she comes across one of the miserable asirim, creatures who steal into the city each night of the twin full moons to take tributes. Çeda is not killed as she feared, and uncovers a wondrous secret that night, that her mother left clues to her heritage and the history behind the kings’ power in a book of poems she left for Çeda. As Çeda begins to unlock the secrets of the kings’ past, she discovers more about her mother, their people, and the dark bargain the kings made with the gods of the desert to secure their power.

The Song of the Shattered sands is epic fantasy told largely through the lens of our hero, Çeda. In fact, when I began writing it, I wanted to tell it only through Çeda’s point of view. I ended up expanding the POV characters, but this is still first and foremost Çeda’s tale. It’s also a tale of how culture and customs can be lost, how the victors write the history books, and how those written out of it struggle to uncover the truth and right the wrongs committed along the way.

PRH: Being a third book, how did you approach it? Does it stand alone enough for readers to jump in? Or do you think people should start with the previous volumes first?

BPB: A few years ago I was sitting on a panel with Scott Lynch, a writer I’ve really come to admire, and he was talking about how a few different series—from Lois McMaster Bujold and Steven Brust, if I’m remembering correctly—looked at different aspects of a world in each of the books in a series. In other words: the books in the series were not simply one long arc broken up artificially by book covers, but rather, different prisms through which the world was viewed. Scott said he’d adopted that same approach for his Gentlemen Bastards series (a series I highly recommend). In the first book, he has a major heist, a la Oceans Eleven, in the second book it’s piracy on the high seas, the third book is about cheating in politics, the fourth book is about espionage and war, and so on.

That approach really spoke to me, so I’ve been using it as the series has progressed. The third book just published, so I’ll try not to be too spoilery, but suffice it to say that in the first book, Twelve Kings in Sharakhai, I’m trying to show the heart of the city of Sharakhai, what it’s like now and why someone like Çeda would want to bring the kings down. In the second book, With Blood Upon the Sand, we see more about the kings and the Blade Maidens who protect them. In the third book, A Veil of Spears, we head deep into the desert and learn more about the desert tribes who gave birth to Sharakhai. And so on.

I’ve had the larger, overarching plot of the series in my head for some time. It’s important to make sure each book has its own arc, that it ends with some feeling of resolution, while at the same time setting up the series finale. I do try to reorient readers as each new installment in the series begins, but because they’re a part of a larger tale, I wouldn’t recommend anyone start with the third book. Start with Twelve Kings and work your way forward.

PRH: You write amazing characters and I love your setting — a setting quite different from most epic fantasy. When you are writing, what do you like best about the process? Do you love writing setting, dialog, what? Or is it all fun?

BPB: Thanks so much! I take pride in worldbuilding. It’s something I really enjoy about the writing process.

I enjoy a lot of other parts of writing as well, but my favorite things to write are definitely the blow-ups between characters. Fights. Disagreements. Arguments. They take careful planning. You can’t have that sort of conflict without the characterization and emotional buildup that support them. Well, you could, but the payoff wouldn’t be there for the reader. I’m constantly working this angle with various characters and various threads. I build toward a conflict, show where the characters’ minds are at with respect to some issue (possibly pressing them along the way to care about it more) and then deliver the emotional punch.

It’s so satisfying to play out an argument between two characters partly because it’s inherently exciting, partly because it will have an effect on the outcome of the novel, but mostly because I care what happens between the characters. I’ve lived both sides of the argument. Even if I feel that one side is wrong, I get why the character feels a certain way. It’s a great payoff for me as a writer, and I hope it is for readers as well.

PRH: I love that Donato cover on the book. What is it like seeing your work brought to life by one of the best artists working right now? And how much direction do you give?

BPB: I’ve long been an admirer of Donato’s work. I love so many of the pieces he’s done, from Lord of the Rings to Game of Thrones to his robot series and more. His cartographer piece (http://www.donatoart.com/portraits/cartographer.html) is one of my personal favorites. So to see him work up these gorgeous images of Çeda and Sharakhai and the desert beyond has been one of the highlights of my writing career. A genuine thrill.

I’m lucky enough to be working with a publisher in DAW Books and my editor, Betsy Wollheim, who solicit author input on artwork. I get involved in the early stages by supplying a few scenes I think might be helpful as Betsy provides the art direction and Donato begins coming up with some rough ideas. I’m pulled back in when the roughs come in, at which point we all talk about the 3 or so sketches that Donato has come up with. After a few comments and tweaks, Donato then renders the final image. If you know his work, you’ll have seen his white-on-sepia sketches (http://www.donatoart.com/drawings/). They’re good, but they’re rather rough. It’s pretty stunning to see them go from that to his final images, which are just gorgeous. By the time the final comes in, there won’t be many tweaks, but we’ve made a few along the way.

I’ve been lucky enough to have designed the last two covers as well. I’m proud of how they’ve turned out, and I’m excited that so many people are going to have not only something I wrote, but something I helped to brand as well.

PRH: The next book is titled Beneath the Twisted Trees. How is work going on that? And how many volumes/stories do you think you still need to write after A Veil of Spears?

BPB: The first draft of Beneath the Twisted Trees is nearly done. I have perhaps five weeks of writing left to reach a very rough first draft. I’ll immediately launch into a second draft to get something that’s consumable for my editors and beta readers. But it’s going smoothly. I’m really excited to get this next book done and into the editing stages. It takes the story forward in some exciting and unexpected ways.

After Trees, I have two more books to finish the series. These are titled When Jackals Storm the Walls and A Desert Torn Asunder. As I write the fourth book, more and more of these final two books are coming clear. I’m eager to get to them and to wrap up the series!

A Veil of Spears by Bradley P. Beaulieu is in fine bookstores now! Need an epic fantasy filled with complex characters and a great setting? This is it!