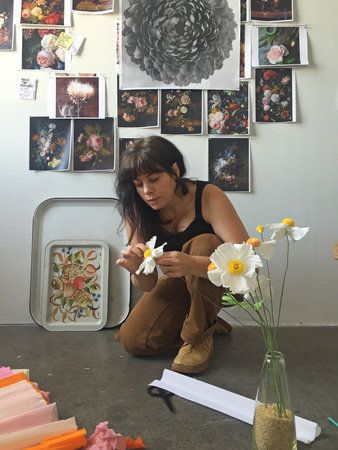 TIFFANIE TURNER is a licensed California architect, fine artist and instructor in the art of paper flower making in the United States and worldwide. Her work explores nature and botanical specimens in extremely large and sometimes very small scales, in paper. Her work has been exhibited in the San Francisco Bay Area’s Bedford Gallery, Jack Fischer Gallery, the San Jose Institute of Contemporary Art, and at the de Young Museum in San Francisco, where she was the artist-in-residence. Tiffanie has appeared in Vogue, American Craft, the San Francisco Chronicle, and O Magazine and has been featured online on Design*Sponge, The Jealous Curator, and Poppytalk, among others. Raised in the woods of New Hampshire, Tiffanie now resides with her husband and two children in San Francisco, California, where she has lived for the past twenty years.

The Fine Art of Paper Flowers