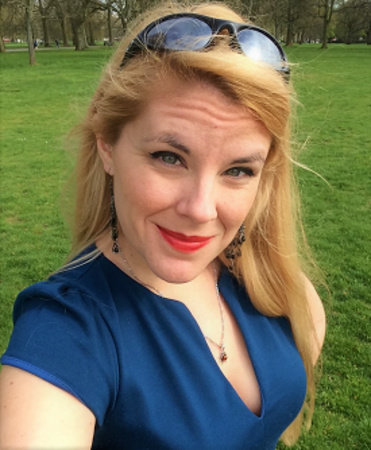 Cass Morris works as a writer and educator in central Virginia. She holds a Master of Letters from Mary Baldwin University and a BA in English and History from the College of William and Mary. She is also one-third of the team behind the Hugo Award Finalist podcast Worldbuilding for Masochists. She reads voraciously, wears corsets voluntarily, and will beat you at Mario Kart. Find her online at cassmorriswrites.com or on Twitter & Instagram @cassrmorris.

Ancient Rome is a great setting for fiction.

That time period had a pantheon of gods, exotic cultures mixing, political intrigue, and a conflict of philosophy and government power.

Author Cass Morris has taken those excellent seeds of storytelling and grown them in From Unseen Fire, her debut novel publishing in April 2018. It is filled with all of those things while adding the elemental magic of mages, creating a powerful tale of a Rome-type city trying to discover its future, torn between expansion or isolationism. Add a beautifully-complex young mage in Latona of the Vitelliae as she struggles with her place, and it makes for a great epic fantasy.

PENGUIN RANDOM HOUSE: From Unseen Fire is publishing in April 2018! Tell readers about the new fantasy and its main character, Latona?

Cass Morris: From Unseen Fire takes place in Aven, an alternate version of ancient Rome where elemental magic has shaped society as much as law and war. In the wake of a brutal dictatorship, two factions compete to rebuild the Republic in the shape they desire. One side is protectionist and isolationist, seeking to preserve conventional morals and keep their nation small enough to easily control; the other side is expansionist and more permissive, looking to embrace the opportunities that allies and immigrants can provide. By law, the use of magic to influence politics is forbidden, but both sides skirt the rules where they can — and some are willing to step dangerously far over the line.

Latona of the Vitelliae is a mage of Spirit and Fire, possessing incredible power that she has long suppressed. She’s afraid of her talents, and a little afraid of herself, because all her life she’s been told how dangerous her abilities are, and some events in her past have reinforced that. In From Unseen Fire, she starts breaking free of all those restrictions. She wants to put her magic to good use, to serve and protect the city she loves, but she faces many obstacles. Some come from people with good intentions, like her father, who has always been afraid of the danger she could be in if unscrupulous politicians realize the extent of her abilities; others object out of spite or jealousy or good old-fashioned misogyny. It’s an uphill battle, and she also has to contend with her own past trauma and her concerns for how her actions might affect the rest of her family as they navigate treacherous political terrain.

She has support, though, from her sisters, as well as from other female mages similarly tired of being held back — and then there’s Sempronius Tarren, an ambitious senator with grand plans for Aven. Unbeknownst to Latona, this longtime friend and ally of her family is also a Shadow mage who has, in violation of Aventan law, kept his powers a secret. Sempronius senses the potential in Latona, admires her tremendously, and yearns to see her make the most of the gifts the gods have given her. Association with him will bring on just the sort of danger her father has always feared, but Latona is tempted both by the man himself and by the vision of the future he represents.

PRH: Elemental mages play a huge role in the book. How did you go about forming their individual powers? Did the story dictate what magic they’d have? Or did the story evolve around them?

CM: The system of Elemental magic in From Unseen Fire, with nine Elements balancing each other, is actually one I’ve toyed around with for years in different forms. In some ways, it was magic looking for a story! When I decided that I wanted to write in a Roman-based world rather than the somewhat typical medieval-Western-European, I found that the polytheistic religion and the multi-faceted Elemental magic dovetailed together beautifully. From there it was a process of defining the rules of how the magic worked and its place in Aventan society. I knew from the start that Latona could control Spirit and Fire and that Sempronius was a secret Shadow mage, but the nuances of what that all meant came along as I developed the plot and character arcs.

I’ve had a lot of fun playing with the intersection of magical power and personality: how much does one shape the other, where are the stress points, how might the same Element manifest differently from one mage to another, that sort of thing. For example, Latona’s Elements are inclined towards spectacle and showiness, and her personality is naturally charismatic, generous, and somewhat hot-tempered — but trauma and pressure have led her to squelch down a lot of who she is, so it’s been fun to explore that tension between her magic, her true self, and the version of herself she’s been forced to perform. There’s also a lot of joy in the magical system, for me, in that it doesn’t have to only be classical — these Elements can apply forwards and backwards through other historical eras, interpreted through the new lens of a different civilization, so the system may well reappear in future projects!

PRH: As you said, the city of Aven is based on Rome. What kinds of research did you conduct to bring Aven to life? If you could visit Aven right now, what part of the city would you go and why?

CM: I’ve had one foot in the classical world since I started taking Latin in the seventh grade, so a lot of building Aven’s world meant revisiting familiar territory and delving deeper into it. There are some wonderful resources on the ancient world out there, particularly if you’re interested in social history: Alberto Angela’s Day in the Life of Ancient Rome and the books of Philip Matyszak, for example. Some digital projects helped as well, like Stanford University’s ORBIS, which calculates travel time in the Roman Empire. I also immersed myself in Latin literature: Ovid’s Ars Amatoria, Catullus’s poetry, the histories of Tacitus and Livy, and Lucretius’s De Rerum Natura — the last of which includes the quote that gave From Unseen Fire its title.

The most exciting research was taking a trip to Rome and spending two solid days wandering around the Palatine, Capitoline, and Aventine hills. That gave me the opportunity to place myself in my characters’ footsteps. I loved standing on the Palatine Hill at the spot where I’d placed the Vitellian household and looking out towards the Tiber River, imagining what that landscape would look like through Latona’s eyes. I took something like 700 pictures, and the best of those are up on my Facebook page, so anyone who follows me there can see how delighted I was with everything I saw!

If I could go to Aven, I’d love to spend some time in the vast markets north of the Forum: flowers, spices, fabrics, food from all over the Mediterranean, traders from dozens of nations — it’d be a great place to experience the cheerful chaos and multiculturalism that are what my protagonists so love about their city. Open-air markets tend to be my favorite places in any new city I travel to, so I’d love to immerse myself in Aven’s. Attending a Saturnalia party at a fashionable home on the Palatine would be a close second on the list!

PRH: The cover for From Unseen Fire is newly revealed. As the author of the book, what is like to view your book’s cover for the first time? And what do you think of it?

CM: Something about having the cover out in the world finally makes this all feel real. I’ve been working on this project since 2011, and while each step along the way (finishing the manuscript, getting an agent, landing the book deal) has been exciting, this is the first aspect that’s really public. It drives home that this is actually happening, for real, not just as a dream inside my head. I’ve anticipated inviting others into the world of Aven for so long, and revealing the cover feels like the first chance to do that in a big, significant way.

I’m utterly delighted with the art. It’s unique and so evocative. Artist Tran Nguyen really did a lovely job — she absolutely nailed Latona’s look and her strength, and I adore the shattered-fresco style of the painting. It’s not just eye-catching; it also hints at some major themes of the book. Fracture magic plays a big role, but I feel that the cracked imagery also speaks to big questions of what do you do when a person or a relationship or a whole society shatters?

PRH: I’m sure you are already working on something new. What can readers expect from Cass Morris after From Unseen Fire publishes?

CM: I’m hard at work on Books 2 and 3 in the Aven Cycle, which will continue Latona’s journey and the story of her world. Obviously I can’t say too much about them without spoiling From Unseen Fire, but where the first book leaves off, there’s still a lot of Aven’s destiny yet to be resolved and a lot of Latona’s personal arc left to explore. There’s also a mountain of material that, for one reason or another, doesn’t fit into the books themselves, so I’m looking forward to sharing more of the world and magic of Aven with readers on platforms like my Patreon.

I’ve got two other projects percolating in the early stages of outlining, world-building, and drafting — one’s a space opera with a main character inspired by Julie D’Aubigny, a figure from French history (a wild, irrepressible, occasionally criminal, bisexual swordswoman/singer), and the other is a secondworld fantasy involving star magic in a Byzantine-esque setting. Those both have a lot of development ahead of them, but I have high hopes!

From Unseen Fire by Cass Morris will publish April 2018! You can learn more about the author at www.cassmorriswrites.com.

See Rome as never before!