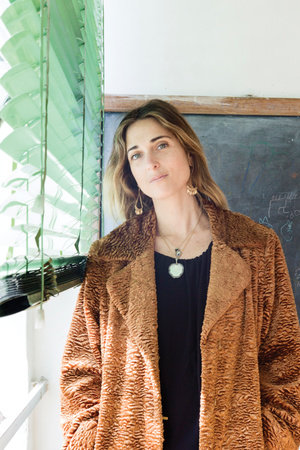 CHIARA BARZINI is an Italian screen and fiction writer. She has lived and studied in the United States where she collaborated with Italian Vanity Fair, GQ, XL Repubblica, Rolling Stone Italy, Flair, and Marie Claire while publishing essays in American magazines such as the Village Voice, Harper’s, Vogue, Interview Magazine, Vice, and Rolling Stone. Her fiction has appeared in BOMB Magazine, The Coffin Factory, Noon, The NY Tyrant, Vice, and Dazed & Confused. She is the author of the story collection Sister Stop Breathing(Calamari Press, 2012) and has written a variety screenplays for both television and film. Her most recent film work, Arianna, the coming of age story of an intersex adolescent, won numerous awards at the Venice Film Festival and was nominated for Best Screenplay at the Italian Golden Globes, 2016.

Teenaged Eugenia has just moved to Los Angeles from Rome, and is about to start school. The year is 1992, and Eugenia is feeling sharp in her new Reebok Pumps. “If you worry,” her glamorous Italian movie star mother reminds her, “just pump your shoes.”

Sneakers turn out to be the first of many bad choices that Eugenia makes in Chiara Barzini’s arresting and unforgettable new novel, Things That Happened Before the Earthquake. When Eugenia walks through the door of her San Fernando Valley high school, she discovers the local girls favor heels; the boys dress in gang colors. It is the height of racial tensions following the Rodney King verdict; OJ’s trial for the murder of Nicole Simpson looms on the horizon. Eugenia self-medicates the pain of dislocation with casual sex and long walks along Sepulveda Boulevard before finding her own inner California Girl in the overgrown landscape of Topanga canyon.

The novel is based on Barzini’s own experiences moving from Rome to Southern California as a teen, an experience it took her decades to make sense of but which, she says, fundamentally shaped who she is as a writer. She spoke to Penguin Random House from Rome about the differences between Italy and the U.S., writing in English, and why she wrote a novel instead of a memoir.

PENGUIN RANDOM HOUSE:Your novel takes place in Southern California but you live in Rome. Was it hard to write from a distance?

CHIARA BARZINI: I wrote it in Rome and then I tried to take mini trips to L.A. to get back in the mood and do some research. I started writing it when I had my first kid. There were a lot of five a.m. alarm clocks. Carving out time when I had moments. But it felt like something I had to do, so I was charged by it. Having kids, you have so much less time, so the time you do have is so much more precious. I was like, “can I have two kids and write a book? Yes!” But it did take me a long time, from start to finish like five years.

PRH:Did you have the idea since the time you lived in L.A. as a teenager?

CB: I did. After I left I would tell stories and by people’s reactions I realized that a lot of what I had seen was so different from Italy. At that age you are so unconscious, you’re just like an ‘on’ button. I would sometimes think, can you believe this really violent thing is happening? I think you don’t process things like that as a teenager, and then when you’re an adult you’re like, what happened? It’s an age where you can take in a lot without suffering, or you suffer in a different way. I was in warrior mode; I wasn’t thinking about it, just going through it.

PRH:Was it hard to find the voice for Eugenia that blends that teenage consciousness with an adult perspective?

CB: What’s funny is they did the audio book and one question was, how old is the narrator? I think the narrator is 25. I started thinking about writing this book when I was 25. That’s when I gathered enough consciousness. I had to develop a certain maturity of my own to have a bit of detachment. There were previous versions I started working on when I was exactly 25 that were more like memoir, and that just didn’t feel interesting, or it felt too close. It was a really long process, I had to mature into it.

PRH:How do you have the distance to know what to fictionalize?

CB: That’s what took so long. It started as a memoir, and then there was this weird limbo phase where I thought, I can’t write that because it didn’t happen. In the book, the night that Arash gets killed, which is something that really happened, I wasn’t there, and it didn’t occur to me that it would be interesting if Eugenia was there, if she was involved. When someone suggested that I was like, but that didn’t really happen! There were a lot of things like that.

PRH:Had you been keeping diaries or journals?

CB: I had diaries, journals, a lot of photos I was taking at the time, and then I just developed a weird nostalgia fetish for Los Angeles. I started reading this amazing anthology called Writing L.A. I was constantly reliving the city through other writers, and having that as a source to go back to. The most influential was this woman called Lynell George. She had a story that was very much the mood of the early 90s, very racially intense. She had a sentence about when she was in junior high she went to more funerals than parties. There was something so authentic about that. The city was so violent. It was a story about someone getting involved in a gang confrontation. It was a really dangerous time, and she captured that very well and I was very inspired by it.

PRH:Did you involve your parents when you were writing? At what point did they read it?

CB: I gave it to both of them in December; my mom had a really heartfelt reaction. My dad has been a bit more detached about it. I knew that it would be a touchy thing. My mom is very loving, it brought up stuff for her, just remembering, and understanding that there were other points of view. The way I manifested my unhappiness at the time was rebellion. When I found the language to explain how I was actually feeling, that woke something up in her. Twenty years later I was able to navigate that a bit.

PRH:How was it writing in English?

CB: It was hard because I was in Rome, so I wasn’t hearing or speaking English. Then I started to listen to a lot of podcasts. Someone told me, just be in the language. I started listening to podcasts obsessively, listening to the tones of how people spoke, reading English, watching English shows. It was never a question of whether or not I should do it in English. It was definitely challenging, but for sure the language I had to write it in. The first short story I wrote was in English. Then I was reading literary journals, I was reading this journal called Noon all the time, and The Paris Review. All these places would excite me so much. There are no literary journals in Rome; everything here is so heavy, so that was a nice escape route.

PRH:What do you mean by heavy?

CB: There’s a very strong tradition. There’s one journal, it has so much weight and importance, it is “the” literary journal. In the U.S. it’s like, get three kids in the room, one will do the editing, one will find some money, you just do a journal yourself. That doesn’t really happen here. There’s not a community for young writers. Italians refuse to publish short stories because they don’t sell. For me short stories have been very exciting, more so than novels.

PRH:Why did you move back to Rome?

CB: I was teaching at City College in New York and I came back to Rome while I was waiting for a visa to come through. While I was here my friend Luca had been asked to write a screenplay adaptation of a cheesy romantic novel, and the director said, you should probably write it with a girl. Which is sort of the only reason female writers get called to work in Italy is like, oh we have a girl character, we need the female sensibility. We need to figure out what it feels like to be on your period when you’re twelve. So he called me, and we fell in love writing this cheesy romantic comedy which became a huge hit. It’s called “Sorry But I Love You.” They hired us immediately to do the sequel, “Sorry But I Want to Marry You.” Then it was like, should I stay here and write these commercial screenplays that are not exactly my cup of tea but an amazing learning experience, or should I go back to New York and try to teach Dostoevsky to people who say Dostoyevsky was a hater. I was teaching in Harlem and it was hard. So finally I decided to stay.

PRH:Are you going to write another novel?

CB: I want to. I hope I can. I do have an idea. Still L.A. The city is very different now. There’s some spots I can go back to that still have the same energy. I feel the same with New York. It’s changed so much, all these huge buildings but there’s something about it, if you go to the East Village, despite everything I still think you can feel the East Village. Even though it’s all condos you can smell it, under the dirt.

PRH:Do you feel like a citizen of both countries?