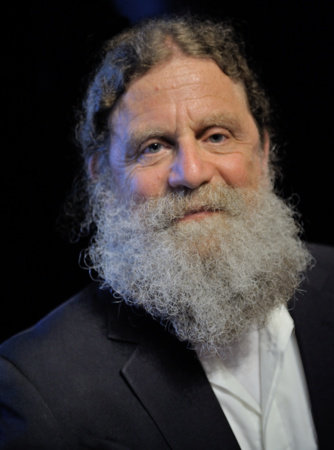 Robert M. Sapolsky is the author of several works of nonfiction, including A Primate’s Memoir, The Trouble with Testosterone, and Why Zebras Don’t Get Ulcers. He is a professor of biology and neurology at Stanford University and the recipient of a MacArthur Foundation genius grant. He lives in San Francisco with his wife, two children and dogs.

Sign me up for news about Robert M. Sapolsky and more from Penguin Random House

Humanity is as capable of astounding kindness as it is astonishing cruelty. For most of recorded history, determining why we lean in either direction has been the purview of philosophers and holy men. Now, a new age of brain science is upon us, and scientists like Robert Sapolsky are finding long-sought-after answers in anatomy, genetics, and neurotransmitters. In his new book, Behave: The Biology of Humans at Our Best and Worst, Sapolsky shares some of what he’s learned. The author addressed some of life’s headier questions – free will, crime and punishment, and the nature of love – in the following interview.

PENGUIN RANDOM HOUSE: You’re an endocrinologist: a specialist in the brain. Do you think that your work has become of more interest to the everyday reader over the course of your career? Is the public developing more awareness of the role that anatomy plays in who we are?

ROBERT SAPOLSKY: Absolutely – for better or worse, but for mostly better. I think that a great index of this is that in the past when one would talk to a science journalist, it would always turn out to be someone who was working the sports desk or city desk and screwed up something royally, and their punishment was that they had to do science for the next year. Now, science journalists have all sorts of training in science. That alone is a measure of how much this has shifted.

PRH: Do you find that people are scared to learn just how much their brain chemistry affects what they think of as being themselves? Is there a chance the idea gives some people a sense of comfort?

RP: My sense is that it’s only a subset of people who get comfort from it. I teach a large class every other year – about 500 or 600 students or so – and basically it’s an overview of the biology of social behavior. The theme is that it’s all biological. Somewhere along the way, a surprising percent of them suddenly develop an existential crisis or just get creeped out or unnerved by the implied lack of volition – the mechanistic basis of all of that. A subset of those students experience it in the form of a religious crisis, but even those who don’t are just creeped out for a while. We all like this pretense of being unique individuals, and it winds up feeling rather menacing to see how much we are just biological creatures.

PRH: That’s the theme of Behave: that a lot of our behavior is contingent upon biology, if not all of it. Do we have any kind of free will? I guess that’s a complicated question.

RP: Actually, to me right now, it’s not complicated. I used to very politely say that if there is free will then it’s in all sorts of boring places, like whether you’re going to pick up this or that fork as you begin your meal. There really is none: It’s all biology. This is a physical universe. There’s no actions that we do that are not the outcome of a physically causal universe. What we think of these days as behaviors that aren’t biological, or that we’d label as indicative of free will, are simply behaviors that we don’t know the biology behind yet. The biology behind them is less obvious, or more indirect, or more subliminal. It can take harder work to see the connecting steps, but these behaviors are no less biological: Our brains are just as biological as our bones.

PRH:Your book looks at the best and worst of human behavior, and I’d like to talk about the worst, first. Taking your insights regarding behavior in mind, how should society judge someone who commits a terrible act?

RP: This is in the next-to-last chapter of the book: It’s all about the criminal justice system. Just jumping into this from out of nowhere might sound crazy, but hopefully by this time someone will have gotten to that chapter after reading all of the others. It’s more anchored, then. Judgement, justice, evil – let alone words like soul – simply have no relevance to it. A car that has had its brakes cut is incredibly dangerous and capable of doing massive amounts of damage. You have to get it off the streets and put it away in a garage forever if you can’t fix it. No one would say that the car deserves to be kept off the streets: that it has a bad soul or did something evil when it hit someone. The damned thing is broken: Fix it if you can, and if you can’t, make sure it can’t damage anyone. Don’t sermonize at it. On some very, very difficult level, that’s what we’re going to have to approach when we think about human behavior.

PRH: If we can sometimes fix a car, can we also sometimes fix human behavior? Is it malleable or set in stone the moment we’re born? Can we address destructive behaviors in a way that can somehow mitigate the damage they cause?

RP: There are absolutely ways to manipulate behavior, because our behavior is endlessly being manipulated by the world around us. We’ll learn more about how this is done and hopefully it will be used for good. We view a psychopathic killer as being totally evil, or horrendous, or having a rotten soul: a person who is terribly in need of punishment.

It’s hard to have the mindset now that they’re just a broken biological machine, but 500 years ago, in essentially every European country on Earth, if someone had a grand mal seizure and you asked every wise, educated savant there was about what happened, their explanation would be that the person was possessed by the devil – that they let the devil in them – and that it’s totally obvious what the appropriate responses would be: burn them at the stake, exorcise them, or who knows what.

Today, we’re 150 years into saying that, no, it’s not them: It’s their disease. These days, we can even say that it’s almost certainly something screwy with their potassium channels and their neurons so that they have synchronized repetitive discharges that cause seizures. It’s not that they slept with Satan: It’s that there’s something wrong with the resting potential of their neurons. It’s so obvious by now that even when we have to constrain someone’s behavior based on that – for example when someone has intractable seizures that are treatment resistant and they can’t drive a car – no one in a western nation would say that the person doesn’t deserve to not be able to drive a car. Instead, they would just say that they’ve got this screwy, crappy luck of having an epileptic disorder that is treatment resistant, and unfortunately for them they can’t drive until it is under control.

That’s totally comfortable for us now, but it would be an unimaginable mindset for even the most humane, most educated, most liberal, bleeding-heart thinker of 500 years ago. We’ve done this for a biological phenomenon like seizures, but now we’re going to have to do it with every other realm of human behavior. Five hundred years from now, that’s going to be as unrecognizable to us with our limitations today as us talking about resting potentials in neurons would be to someone living 500 years ago.

PRH: Now that we’ve discussed the worst in human behavior, we can discuss the best: love. You’re a married man with children, so I have to guess that this is a topic close to your heart, so to speak. Do we humans love each other, or is there some sort of trigger that we have no control over? How does one examine a phenomenon like love through a biochemical lens?

RP: I think you’ve just said the same exact thing: Do we love other people or is it just a biological thing that happens? Yes, it’s one and the same. We’ve got a lot more insight into what is going on when you’re uncontrollably violent and sociopathic versus why you fall in love with the person you do and why it does, or doesn’t, sustain, but we have a few hints about it. There’s a science to what sort of people we’re attracted to, and it has to do with everything from how similar they are to us, to what sort of pheromones we imprinted on when we were little, and what variants of genes we have related to the neurochemical oxytocin.

Depending on what version of the receptor gene you have for the oxytocin receptor, that has something to do with how stable your relationships are. Does that determine it? Does that guarantee it? Absolutely not, but that explains ten percent of the variability between who has stable relationships and who doesn’t. Throw in more biological factors and maybe you’re up to thirty percent predictability. Throw in all of the factors we’re going to discover in the next twenty or thirty years and we’ll be even further along the way. It’s just another biological phenomenon. It’s an incredibly confusing one.

If you take baboons, for example, evolution sculpted them into a classic polygamous tournament with male-male competition for the females and high levels of aggression. Take a South American marmoset monkey, and you’ll see that it has been sculpted into a monogamous pair-bonding species with low levels of aggression and all sorts of other traits. Then look at humans: We’ve been selected to be somewhere between these two extremes, which is to say that we’re confused.

PRH: I look at the world today and wonder whether we’ll get ourselves on the right track. Do you have hope for our species?

RP: Absolutely: This is so much better of a world than it was even a hundred years ago. We are moving in the right direction very slowly, with some steps backward for every ten steps forward, but things are getting better. Two hundred years ago, there was no country on Earth that was rigorously enforcing anti-slavery laws. Child labor, spousal abuse, and the mistreatment of animals – beasts of burden – were universal. Now, it’s an utterly different world. It’s still not a great one, but it’s getting better.