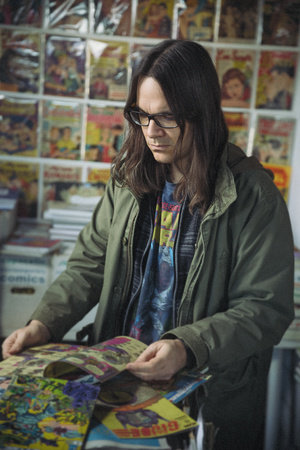 Tom Scioli is an Eisner-nominated writer and artist who specializes in comics and graphic novels. He’s the author of the non-fiction graphic biography, Jack Kirby: The Epic Life of the King of Comics as well as several science-fiction and superhero originals like American Barbarian, The Myth of 8-Opus, and Godland. He has also reinvented established series with Fantastic Four: Grand Design, Super Powers, Transformers vs G.I. Joe, and a cyberpunk reimagining of Go-Bots. He is known for his singular drawing style, kinetic page layouts, and imaginative writing and is one of a small number of auteur cartoonists who writes, draws, colors, and hand-letters his comics. He’s also the host of the pop culture centered Total Recall Show and a frequent contributor to the Cartoonist Kayfabe podcast.