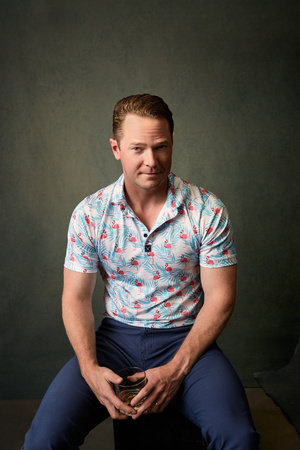 ROBERT JACKSON BENNETT is the author of American Elsewhere, The Troupe, The Company Man, and Mr. Shivers, as well as The Divine Cities trilogy. His work has received the Edgar Award, the Shirley Jackson Award, and the Phillip K. Dick Citation of Excellence, and he has been shortlisted for the World Fantasy, British Fantasy, and Locus Awards. He lives in Austin with his family.

Robert Jackson Bennet is the author of the recently completed Divine Cities series. His new book is Foundryside, the first novel in the Founders Trilogy. Get it from your favorite book retailer tomorrow, 8/21/18!

PENGUIN RANDOM HOUSE: You’ve got a new book out now, Foundryside, but before we get to it, I wanted to ask how you felt about finishing the Divine Cities trilogy.

Robert Jackson Bennett: It feels extremely strange looking back, because it seems like I wrote it just yesterday. But once I start comparing the sizes of my children to when I started the series and when I finished it, iincluding some children that didn’t even exist while I was writing the series, that was a great reminder of how much time has passed.

It feels really weird, because I wasn’t sure how I was going to end it. I had my idea for one ending that I thought I was going to go with, but I could tell when I was setting it up that it didn’t feel right. Something didn’t quite satisfy me. It was as I was driving and listening to a song over and over again, I said to myself that I wanted the last part of the book to feel like this. I wasn’t sure why. Eventually, I realized that, subconsciously, I was plotting to kill this character who was really important.

Realizing that this character had been meant to die throughout was a little bit like realizing you’re about to kill yourself. It’s the closest thing I can think of. It’s like realizing that’s why you put on a suit and wrote your will out, and why you are now sitting in a running car in a closed garage. I’ve never quite had something like that happen in writing: to be plotting something without actually know I was doing it.

PRH: What was that song?

RJB: The song is “I’ll Be Here in the Morning” by Townes Van Zandt, but the version is Kate Maki’s cover of it. It’s really good.

PRH: So have you experienced a sense of renewal with Foundryside?

RJB: Yes, it’s like starting a new business in the sense that you have all of these new problems you have to solve, but I get to cause problems in a very different and fun fashion for myself. This one is a lot more kinetic; a lot bouncier is the way I would put it. There’s a lot more people shouting at each other, which is one of my favorite things to write — people fighting. There’s a lot more banter, I’ll put it that way.

PRH: Your character is a thief, right?

RJB: Yes, she’s a thief; an escaped slave who has an unusual talent. When she makes skin contact with something, she understands that object on an intuitive level. If she touches a wall, she feels what is on the other side of that wall. If she touches a lock, then she can figure out how to pick it. If she feels a box, she knows what’s inside of it. If she holds her hands to the floor for a very long time, then she can feel the feet of all the people around her standing on it. She can navigate rooms in the dark and things like that.

PRH: That’s such a great idea. How did it come to you?

RJB: I started thinking about the show Daredevil, and what it would be like to actually try and navigate the world in that way. In the show, it’s a bit ridiculous, in that he can feel things coming through the air. It doesn’t make a whole lot of sense, so I started thinking about how you could really do this if you were to try to feel your way through the world. I realized it would feel like agony. She can do this stuff, but she hates it. She can’t eat meat, because she’s keenly aware that it is dead flesh she has in her mouth, and that it was part of something that used to be alive. Meat is abhorrent to her, so she eats rice and beans almost all the time. She has to drink weak wine because the water is polluted and clean water is hard to come by. She doesn’t change clothes that often, either, because once she changes into new clothes, it takes some time for her to calibrate her senses.

PRH: She gets her hands on something of great importance. How does this start the plot?

RJB: Yes, she has been hired to steal a box at a warehouse on the waterfront. She’s not aware of what is in the box, and has been told specifically not to open it. The problem is that the way magic works in this world is a lot like coding: You have a script that you an execute, but you have to code it first. Code is highly protected. It can just be a lot of symbols on a piece of paper. She is paid a lot of money to take the box, but she starts to wonder if she can steal it, because she could get murdered. Out of sheer curiosity, and to make sure that she’s not going to get killed for what is inside of it, she opens the box.

An open box. What’s inside? Readers will have to find out for themselves! Pick up Foundryside this week!