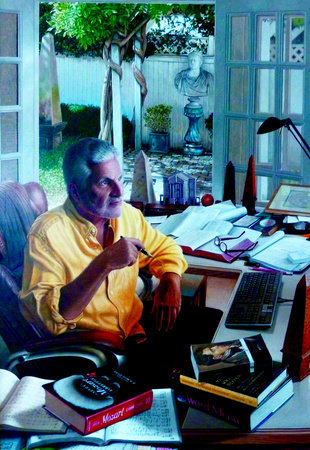 J. D. McClatchy (b. 1945) was the author of eight collections of poetry and three collections of prose. He edited numerous other books, including The Vintage Book of Contemporary American Poetry, and wrote a number of opera libretti that have been performed at the Metropolitan Opera, Covent Garden, La Scala, and elsewhere. He was a member of the American Academy of Arts and Letters, where he served as president from 2009 to 2012. McClatchy taught at Yale University and long served as editor of The Yale Review. He died in April, 2018.

Sign me up for news about J. D. McClatchy and more from Penguin Random House

Poems of the Sea

Books by J. D. McClatchy published by The Library of America

Poets of the Civil War

Because I was the eldest child in my family, and because my father was off fighting in the Pacific, my mother kept an elaborate Baby Book, recording my earliest this and latest that. A few years ago, in a forgotten attic box, she discovered the book and sent it to me. I notice that when I reached age three, she was asked to list my Favorite Outdoor Activities. She’s put a line through "Outdoor" (from the start, I was all for the inner, or at least the indoor life), and written: "Books. Records. Puzzles." They are still my favorites.

One puzzle to record here, a half-century later, is my abiding interest in books. I was read to, but my family was not literary. The gilded bindings of their sets of Dickens and Twain gleamed on the high shelves. Time and Life are what I remember on their laps. What am I saying? I was there too! To this day, I like most to read in bed, and I suspect that’s because it recalls snuggling into my father’s lap, propped on his arm, warm, the book close to my nose, the sound of a man’s voice telling me a story I already knew by heart.

But it’s not myself I want to talk about. It’s books. It’s the difference between "reading" and reading. I offer three memories, three morals. And a motto.

First the motto. It’s from Goethe: "All great excellence in life or art, at its first recognition, brings with it a certain pain arising from the strongly felt inferiority of the spectator; only at a later period, when we take it into our own culture, and appropriate as much as our capacities allow, do we learn to love and esteem it. Mediocrity, on the other hand, may often give us unqualified pleasure; it does not disturb our self-satisfaction, but encourages us with the thought that we are as good as another. . . . Properly speaking, we learn only from those books we cannot judge."

It was not until prep school that I discovered how to read properly, and I owe the discovery to a madman. At fourteen I started in on the classics. The Jesuits who ran the school are renowned as taskmasters, and that first year we were drilled in declensions and conjugations. By the following year we were considered ready for Homer, and handed over to the old priest who was to be our guide through the Odyssey. As it turned out, several years later he was retired to a mental hospital, but I remain indebted to what were then called merely his "eccentricities." Each night’s homework consisted of a long episode to be read, parsed, translated, and understood. And our teacher did not think we could truly understand Homer, or his hero’s trials, unless we duplicated the circumstances of the poem. To that end, we were told to go each night to the basement of our homes, with a lighted candle and a bowl of applesauce (for its Hellenic tang) — and, between gulped spoonfuls, declaim the Greek, pretending we were in the dank, dark hold of a storm-tossed ship. I was never, before or since, so enthralled to a text. I now realize that what excited me then was not just the story or the theatrics. It was the words themselves. Because the Greek words were strange, I had to think about them, about their sound and etymology, their meanings and overtones, how they were combined into sentences and metaphors. The mad old priest was right: reading Homer finally involved the same struggle and search, adventures and homecoming Odysseus himself was driven to.

After my sophomore year at Georgetown, I stayed on in Washington for the summer and enrolled, by special permission, in a graduate seminar on Elizabethan literature. Our textbook was the old Hebel and Hudson Tudor Poetry and Prose, a massive, closely printed compendium as stuffy as our professor, with his wedge of white hair, steel-rimmed spectacles, and stack of file cards that, having drily relayed the fact or "idea" on each, he would snap like playing cards to the back of the pile. I was intimidated, not by being over my academic head or by the lackluster recital (actually, for reasons I can now neither recall nor imagine, he inspired me to love Hooker’s Of the Laws of Ecclesiastical Polity) but by the scope and grandeur of the subject. I made of my apartment that summer a context for my study: curling Hilliard and Holbein prints on the wall, Julian Bream plucking Dowland on the stereo set. Still, I was playing at it, accumulating rather than concentrating. Then one day the assignment was Marlowe’s "Hero and Leander" . . .

On Hellespont, guilty of true love’s blood,
In view, and opposite, two cities stood,
Sea-borderers, disjoined by Neptune’s might;
The one Abydos, the other Sestos hight.

So the poem begins, and goes on to trace the heavenly path that runs along Leander’s back and the pearl-strewn seabed where, stripped to the ivory skin, his body comes to rest. I was literally overwhelmed. It rarely matters who precisely initiates you — the old whore in a walkup, a teenager in the locker room, the telephone lineman picked up in a bar. The experience is decisive. So was this one. It was the first time I had felt the erotic power of a poem. In retrospect, that seems a crucial moment in anyone’s reading life: to fall in love with a text, to feel its sexual heat, to sense it unbuttoning your shirt.

Some years later I was in graduate school at Yale, a class on American poetry with Harold Bloom. We were reading Emily Dickinson. At last I was under the spell of a great teacher, and what he taught me was this: the highest form of reading is asking hard questions of the text, as one should of a teacher. Bloom had — probably still has — a classroom manner that is deliberately provocative, at once gripping and infuriating. Like all great teachers, he merely brooded aloud. His questions of a poem, "What exactly, my dears, does Miss Dickinson mean by ‘circumference’?" — were nearly always unanswerable, but prompted endless discussion (abruptly cut off by another oracular question on a different matter). The effect of these lessons was only felt hours later, at home, in bed with the book. It was then I read Dickinson, and listened — because I had been taught to challenge her — as she took the traditional language of belief, and emptied it of any reassurance, then charged it anew with a startling force. In their own way, her methods mirrored my teacher’s . . . and became my teacher. Reading, I’d been taught, means questioning, sensing that what you read is unfinished until completed in the self. The first text is the soul. And the last.