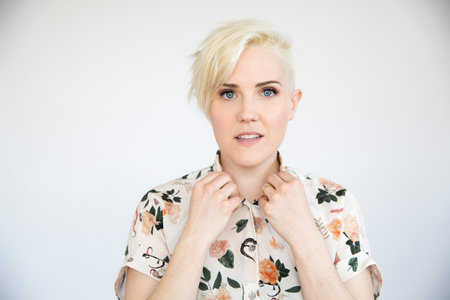 Hannah Hart is an entertainer, food enthusiast, and two-time New York Times bestselling author (Buffering: Unshared Tales of a Life Fully Loaded and My Drunk Kitchen: A Guide to Eating, Drinking, and Going with Your Gut). Since creating the YouTube series My Drunk Kitchen, Hart has co-produced and starred in multiple films and hosted her own show on the Food Network, I Hart Food. In 2018, Hart launched Hannahlyze This, the self-help podcast that just can’t help itself. She currently produces and hosts Tasty’s Edible History on Facebook. Hart’s consistent authenticity in her content has established her as one of the most influential voices in the LGBTQ community and gained her recognition as one of Hollywood Reporter’s New Digital Disruptors and one of Forbes’ 30 Under 30. Born and raised in Northern California, Hannah currently resides in Los Angeles with her fiancée and two cats.